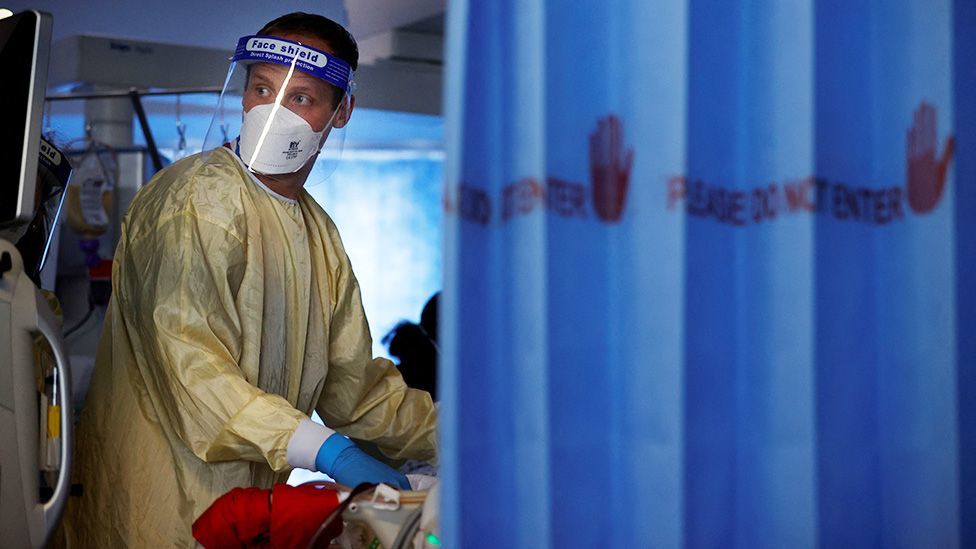 Covid in Scotland: When will we know if the vaccination programme is working?

The Scottish government was warned that a "third wave" of the Covid pandemic is now taking a grip in Scotland.

Many areas of Scotland will remain in level two to tackle the rising numbers of cases in the central belt.

However, First Minister Nicola Sturgeon says there is evidence that the link between cases and serious illness and death "appears to be weakening".

When will we know if this link has been broken?

How many people have now been vaccinated in Scotland?

Public health officials are increasingly confident that the vaccination programme is relieving the pressure on NHS Scotland.

They believe that fully vaccinated adults are less likely to need hospital treatment for Covid - or die. And those who do end up in hospital, on the whole, need shorter periods of treatment than earlier in the pandemic.

Almost 70% of the adult population of Scotland have now received at least a first dose of a Covid vaccine, with more than two million people fully vaccinated.

Coverage is also good among the older age groups who are more vulnerable to becoming seriously ill or dying with Covid. 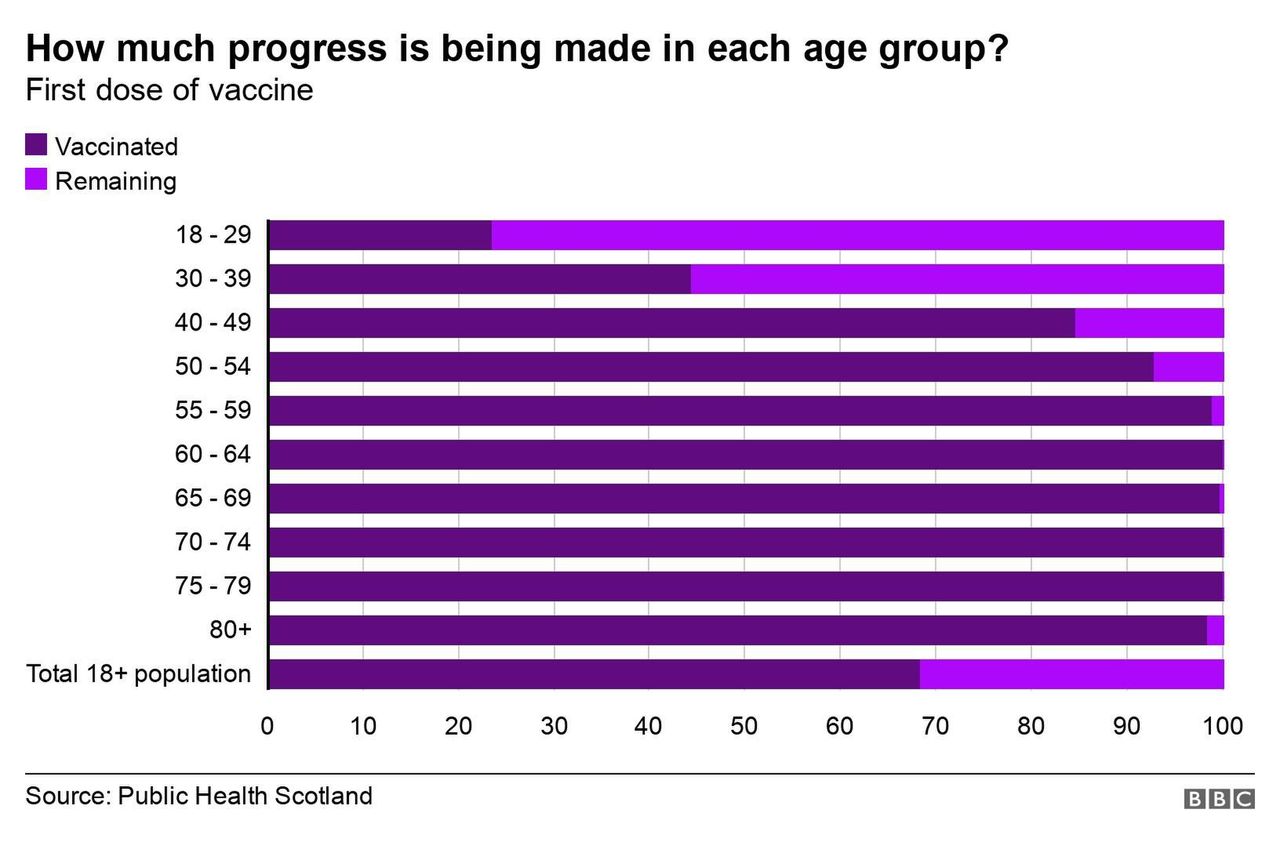 Hospital admissions are going up

Covid cases began to rise again in Scotland at the beginning of May, following a sustained decline since mid-January. The increases we're seeing at the moment are similar to September, at the start of the second wave.

Everyone would prefer case numbers to be going down - but it does provide the ultimate strength test for the vaccination programme.

Will the number of hospital admissions and deaths remain static? Or will they begin to rise steeply again, as we saw in the autumn?

During that period, the average number of Covid patients in hospital has gone up from 68 to 99, a rise of about 46%. 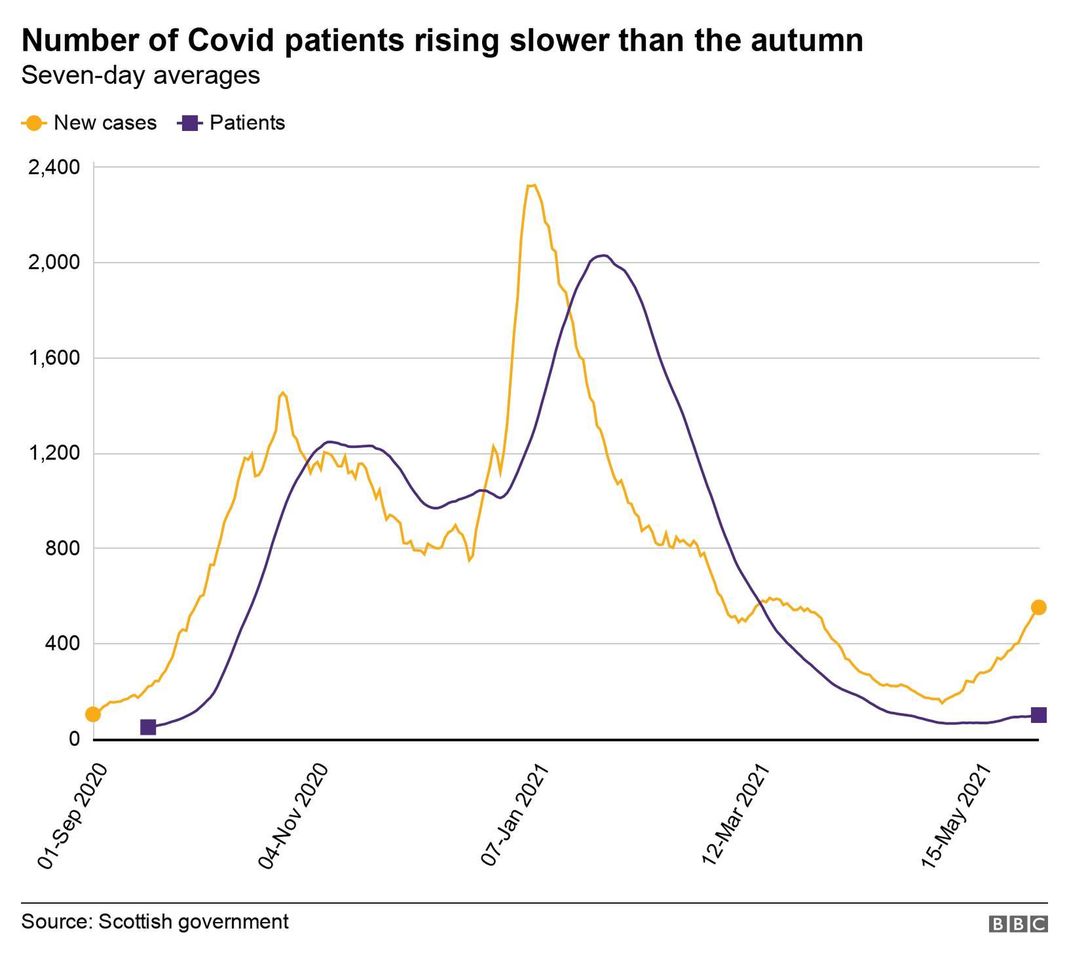 The numbers were increasing slightly faster in September - the average number of daily cases went from 223 to 596 between 18 September and 2 October - but the jump in hospital patients was much higher.

Using a rolling seven-day average of the Scottish government's daily patient figure, they went from 50 to 131 over that period - a rise of 162%.

Looking at Public Health Scotland hospital admissions data, a similar pattern emerges. Although admissions are currently rising, they appear to be doing so at a slower rate than the autumn. 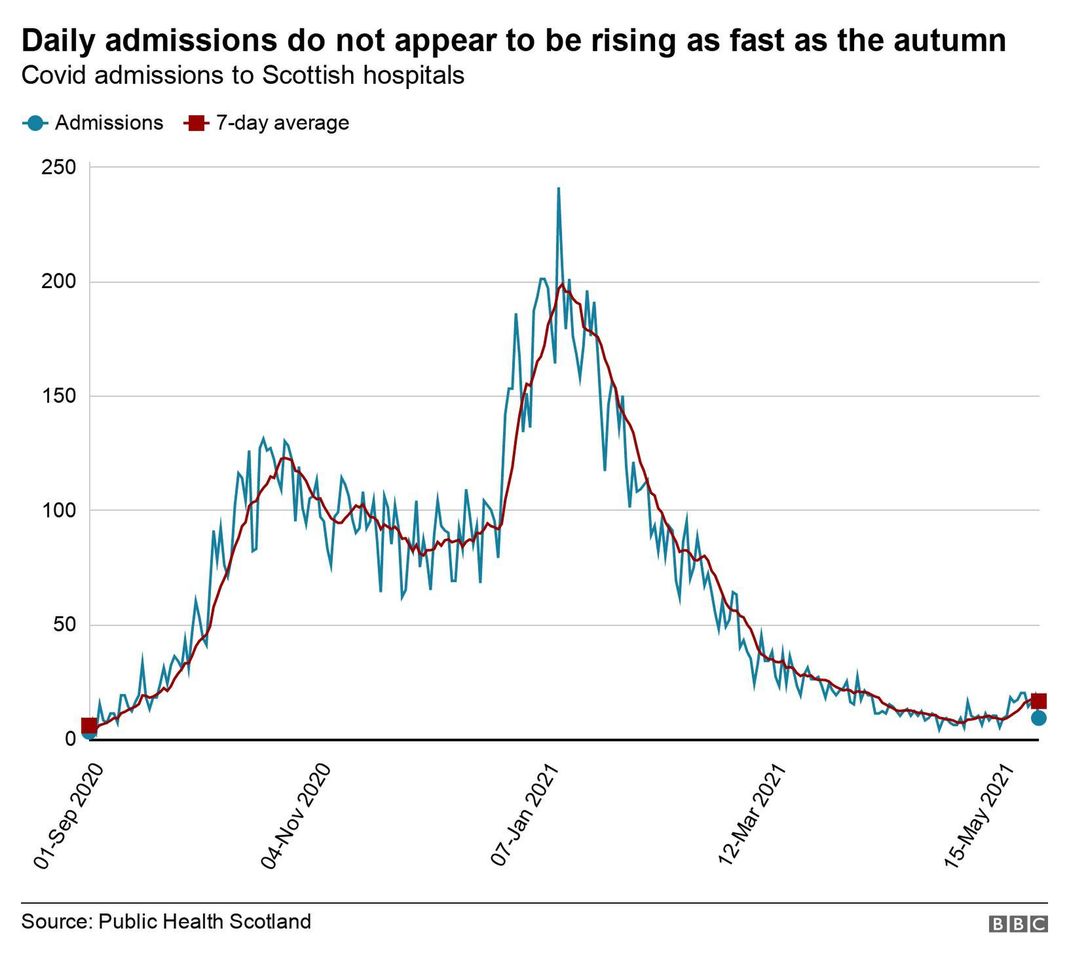 The figures look optimistic, but it is too early to say definitively that the link has been broken between cases and hospital admissions.

There tends to be a three-week delay between infection and hospital admission, so the picture will become clearer towards the end of the month.

However, if the number of Covid hospital patients remains flat, or continues with a slow rise, then the evidence will grow much stronger.

What does the current Covid death rate tell us?

Looking at the latest National Records of Scotland figures, which count death certificates mentioning Covid-19, eight Covid deaths were recorded between 24 and 30 May.

This is up from four the previous week, but it would be wrong to put too much weight on that rise. When figures are that low, they will always tend to fluctuate.

In fact, the number of weekly deaths by this measure looks very similar to September and it is not possible at this stage to discern a difference. 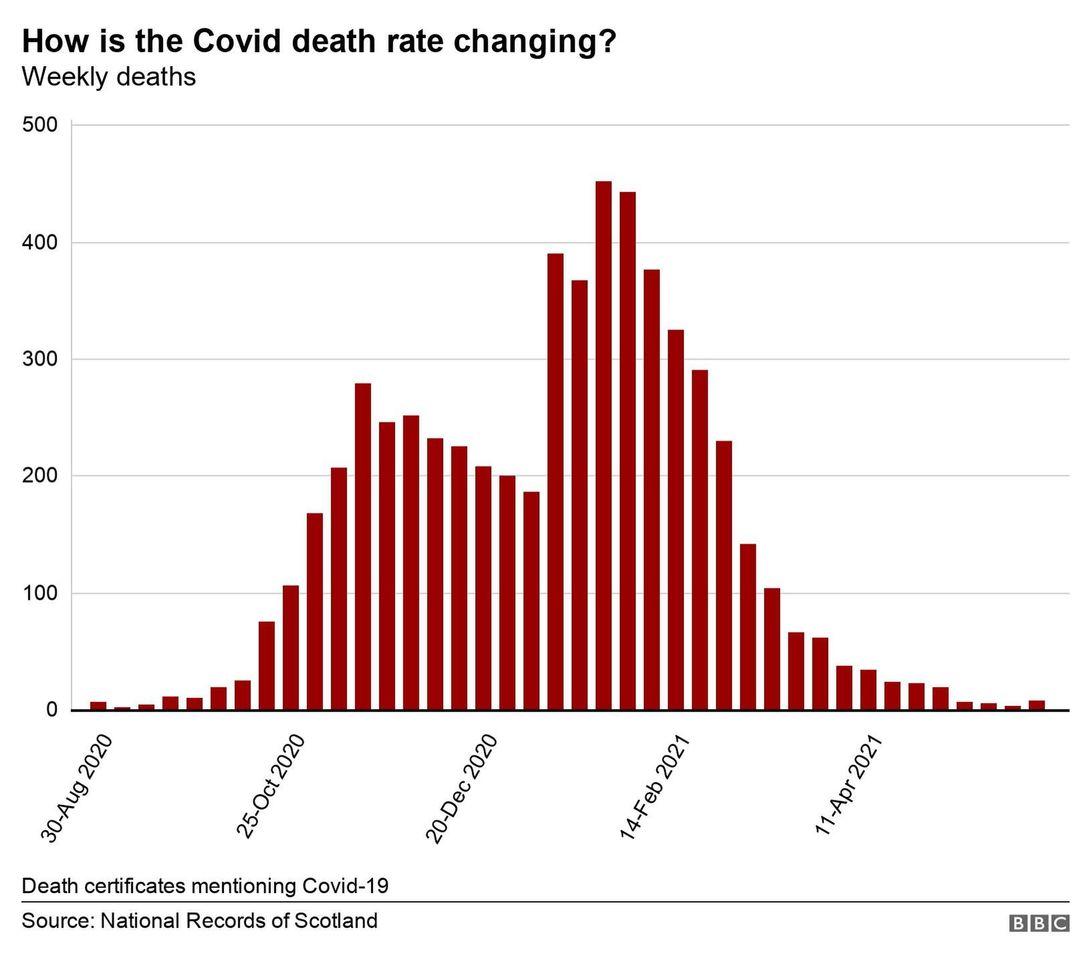 However, the rate of deaths began to increase rapidly in October, and by the end of that month there were more than 100 deaths over seven days, rising from 10 in the week up to 27 September.

It sets a very clear bar with which to measure the next three weeks.

If the number of deaths in June remains relatively flat, or shows just a modest rise, it will strengthen the evidence that the vaccination programme is working as intended.