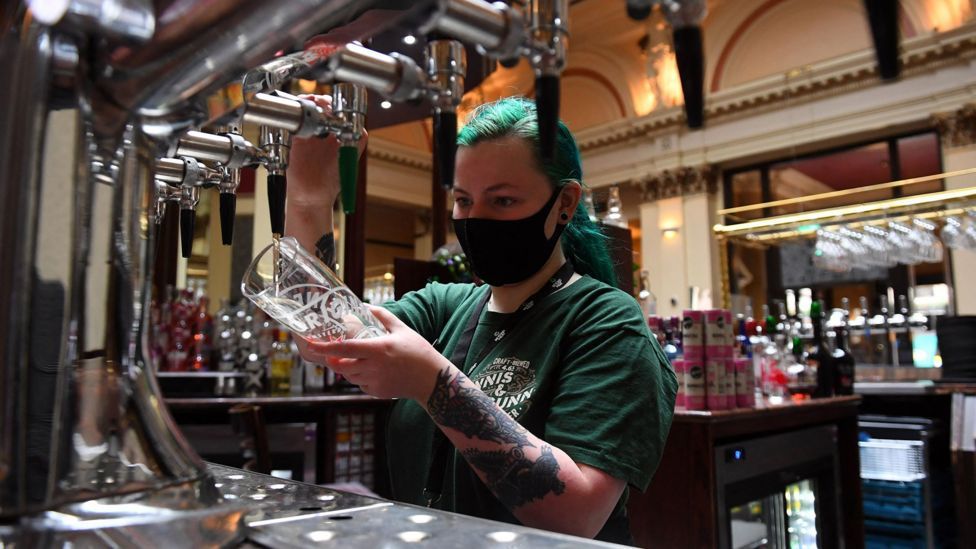 Ms Sturgeon said she understood the measures had a "very adverse" effect.

But she told the BBC's Sunday Morning programme that "we're hopefully seeing Scotland firmly on the downward slope".

Restrictions introduced over the festive period are being phased out, with nightclubs reopening and large indoor events resuming from Monday.

The first minister said the rules made enough of a difference to the spread of the Omicron variant to justify the financial impact.

She added: "That's not me saying I don't understand and agree that those measures had a very adverse affect on businesses. Hospitality throughout the pandemic has been one of the worst hit sectors.

"It is the difference between having protective measures that stem transmission, or allowing transmission to go completely uncontrolled - in which case the impact on business is even greater and even more damaging. "

From Monday guidance advising adults against meeting up with more than three households at a time will also be scrapped, along with curbs on indoor contact sports.

However longer-running measures such as the use of face coverings on public transport and indoor public places will continue.

Scotland's vaccine passport scheme for businesses and events remains in place. Ms Sturgeon said it helped "as a package of measures" to protect against transmission.

She added: "I don't underplay the impact of any of these measures on businesses and the night-time industry, but checking Covid certification is a better alternative to being closed."

She said the scheme was "not causing anybody any real hardship" and had allowed large events to go ahead.

The first minister said she hoped that vaccine passports and wearing of facemasks would "eventually" come to an end.

She said: "None of us enjoy wearing masks, they are not the biggest handicap to endure as we try to spread transmission."

Ms Sturgeon said there would be big "economic consequences" if we let virus spread in an uncontrolled way.

Conservative MSP Stephen Kerr welcomed the lifting of restrictions, but urged the Scottish government to quickly deliver compensation for "the pain inflicted on the hospitality sector and night time economy".

He told BBC Scotland's The Sunday Show: "We should see the evidence when Nicola Sturgeon says it was all worthwhile.

"Infection rates for this variant of Covid were as great here as in any other part of the UK.

He added: "What I can't applaud the Scottish government for doing is dithering in getting the compensation they promised these businesses.

"Some don't even know how to apply for the money. The Scottish government have a lot to answer for."

Meanwhile, Ms Sturgeon said she would set the legislative timetable for a second Scottish independence referendum in "the coming weeks".

She said "preparatory work is underway" and her aim remained to take steps to enable a referendum to take place before the end of 2023.