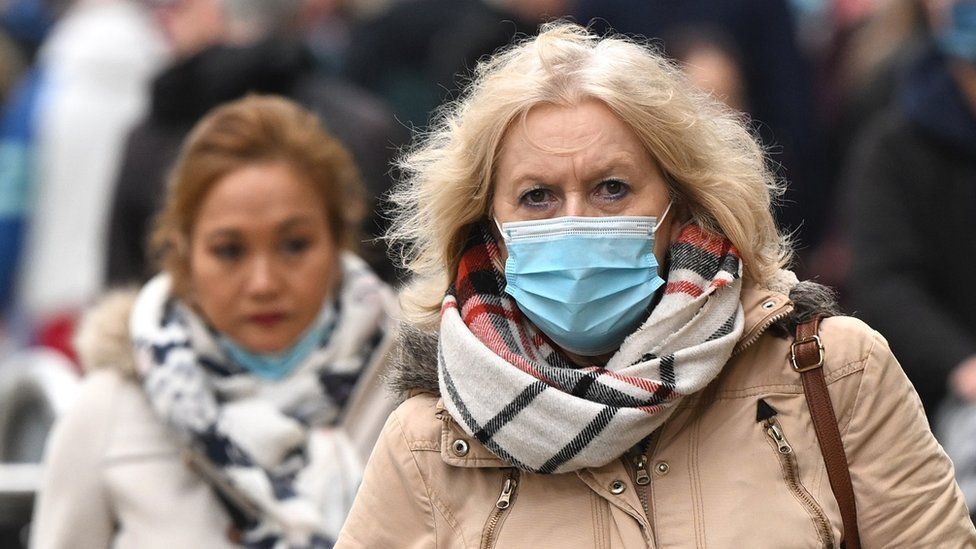 Daily reported Covid cases in the UK jumped to a record 183,037 on Wednesday.

The latest figure includes five days of data from Northern Ireland, accounting for almost 23,000 cases, after reporting was delayed over Christmas.

Meanwhile, frustration has grown over a lack of available lateral flow tests.

But the public should keep trying to access testing as supply will be normal by next week, UK Health Security Agency boss Dr Jenny Harries said.

She also urged people to "use tests they have at home and not pull on the system".

On the high levels of cases, she said: "We need to watch data for a couple of weeks - after new year - to be absolutely sure which way this wave is going."

Cases have continued to hit record highs due to the highly infectious Omicron variant, which officials earlier on Wednesday said now makes up 90% of all community cases in England.

Over the last seven days, 914,723 people have tested positive for Covid across the UK. 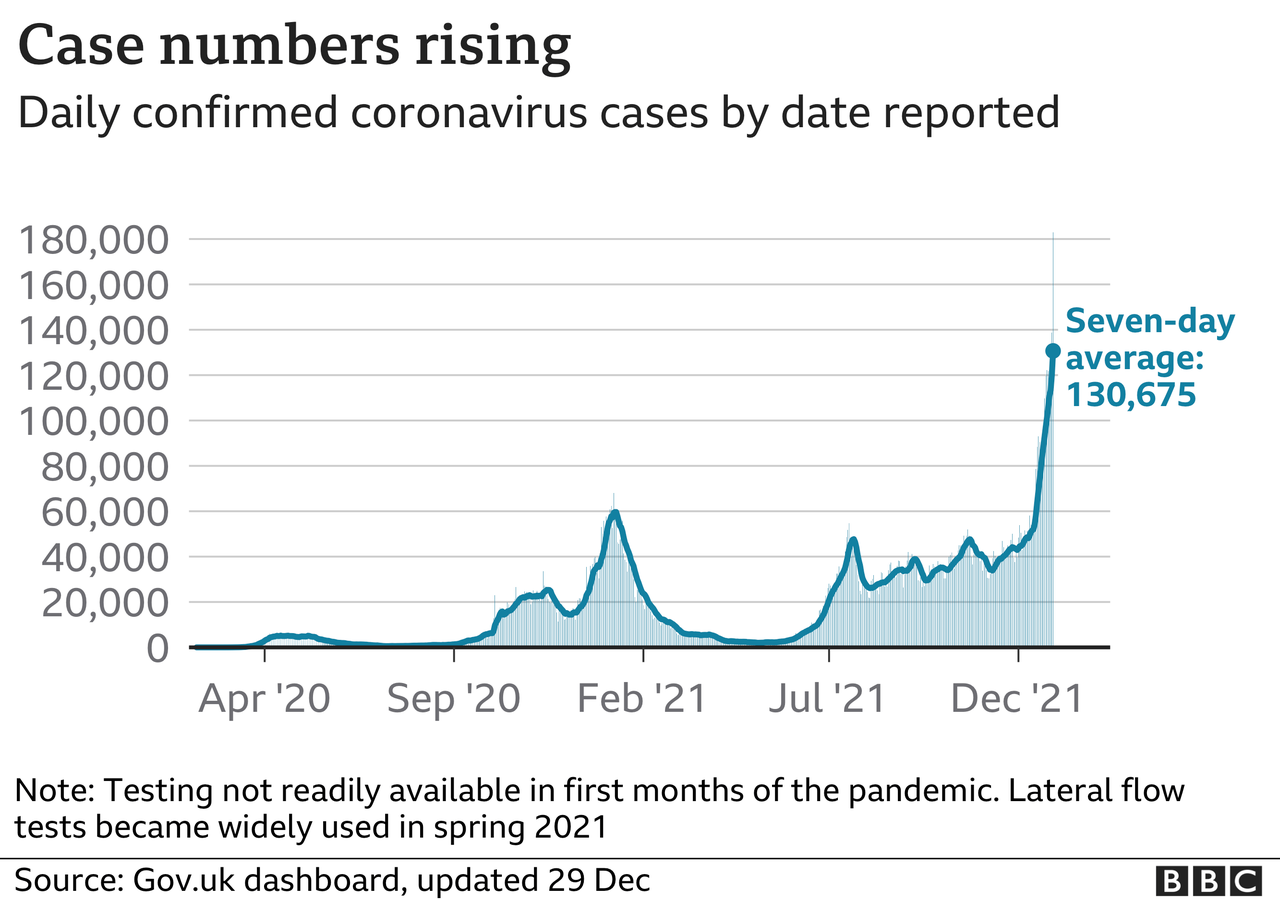 And a total of 10,462 people were in hospital with Covid in England as of Wednesday morning, figures from NHS England show.

This is up 48% from a week ago and is the highest number of admissions since 1 March.

Not all the patients in hospital will have been admitted for Covid - latest data suggests about three in 10 have the virus but were admitted to hospital for something else.

Another 57 deaths were recorded in the UK within 28 days of a positive test.

It should come as no surprise that cases continue to rise and that's translating into more people ending up in hospital.

This is likely to continue for some weeks yet - but it's important to look beyond the raw numbers.

The rapid jump in people in hospital - up 2,000 in England in two days - is likely to be partly down to a drop in people being discharged.

Last Christmas, the numbers leaving hospital more than halved as it is more difficult to discharge over the festive period.

It means there could be hundreds in hospital who have recovered from Covid but not yet left.

The proportion in hospital for what is known as an incidental admission is also growing. These are people who are being treated for something else, and just happen to have Covid.

Last week they accounted for nearly a third of cases. However, the numbers who are seriously unwell with Covid are still going up.

Hospital numbers though are continuing to rise more slowly than cases, once again showing the Omicron variant is leading to milder illness.

And there are signs infection levels in London, which was hit by Omicron first, may have already peaked.

If that is the case and the trajectory is repeated elsewhere, it could mean the burden on the NHS peaking at half the level seen last winter.

Pharmacists said demand for lateral flow tests increased after changes allowed people with Covid in England to end isolation after seven days if they test negative on day six and seven.

And fully vaccinated close contacts of positive cases, including those in the same household, can go about their daily lives as normal with a daily negative lateral flow test in England, Wales and Northern Ireland.

Labour said the difficulty getting lateral flow tests was a "total shambles" and the government should help people "trying to do the right thing" by ordering tests.

The UKHSA said that the delivery capacity for lateral flow testing kits had been doubled to 900,000 a day since 18 December, due to the unprecedented demand.

It also said "exceptionally high demand" for Covid PCR appointments - tests used to confirm a positive lateral flow result - could lead to temporary reduced availability in some areas but currently there were tests available to book online.

England is the only part of the UK which has not introduced post-Christmas measures to curb the spread of Omicron.

Earlier, Boris Johnson said people should enjoy New Year in a "sensible way", telling people to "take a test... but above all get a booster."

Around six in ten UK adults have now had a booster or third dose, latest figures show.

* The US and countries across Europe - including France, Italy, Greece and Portugal - have reported their highest number of daily Covid cases since the pandemic began

* The combination of Delta and Omicron variants is driving a dangerous tsunami of cases, the World Health Organization (WHO) said

* Scotland saw a record 15,849 daily cases - First Minister Nicola Sturgeon said further "steep increases" were expected in the coming weeks, but no changes would be made to restrictions now 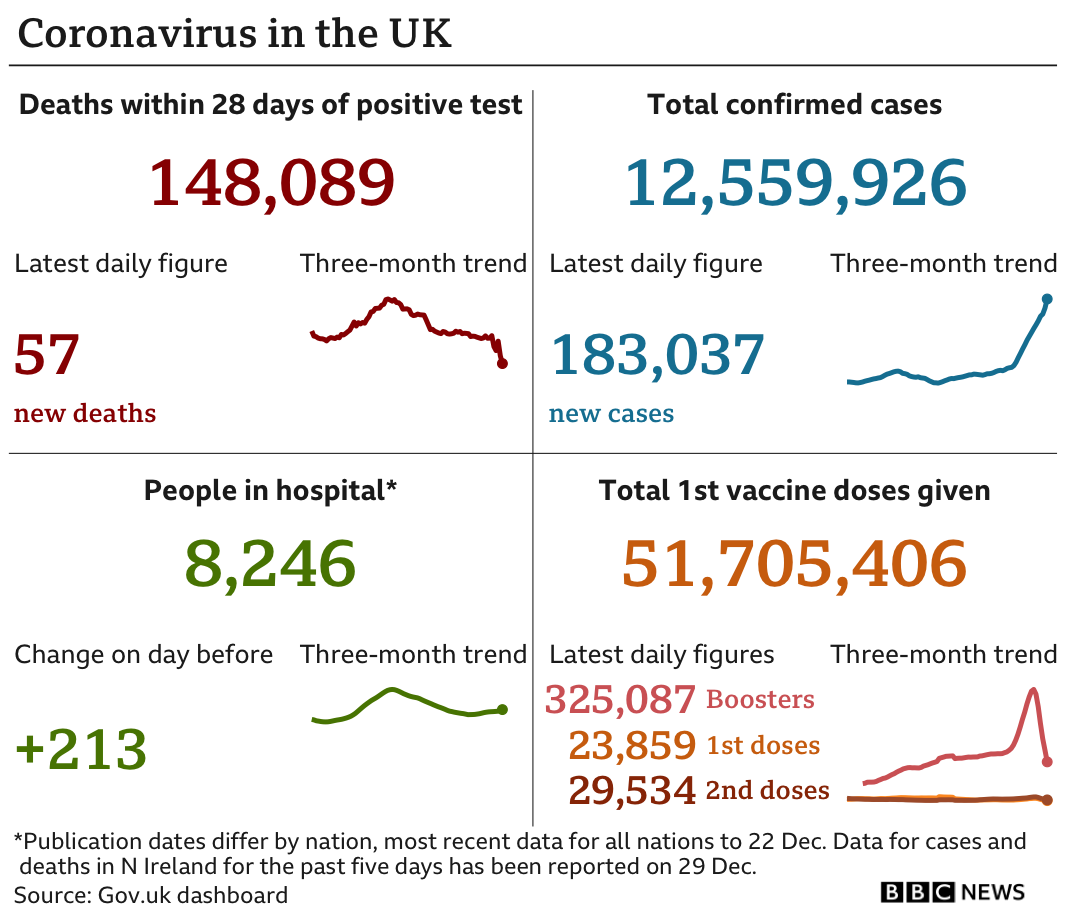