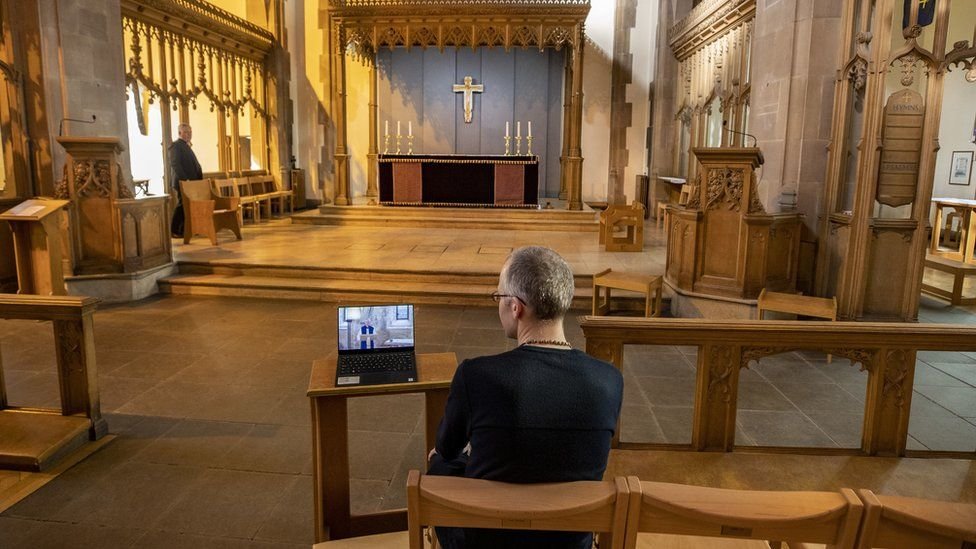 More than half of the Church of England's 14,000 parishes will not open for Sunday services later, as places of worship are hit hard by Covid-19.

Many of the Church's clergy are shielding, while some parishes have decided it is not safe enough to admit worshippers.

Most mosques in London did not open for Friday prayers.

The Catholic Church in England and Wales says parishes that are able to follow guidelines will still open.

Despite coronavirus restrictions, places of worship in England and Wales can open - but many are struggling to do so safely.

The Church of England has told the BBC more than half of its parishes - including some cathedrals - will not open for communal prayer on Sunday. Many have moved their worship online.

The Church said some of its clergy were shielding, and all parishes were making their own decision.

Rev Canon Nick Brown, Precentor of Lincoln, said the decision was taken "with a very heavy heart" but explained: "To bring people together in worship is at the very heart of our purpose, but having considered expert advice we believe that the best way to help limit the spread of Covid-19 is to suspend public services for the time being."

The Catholic Church in England and Wales says it will keep its churches under review to make sure "the highest standards of safety are maintained". It is also organising online masses in many parishes.

With more than half of the Church of England's parishes closed for communal worship, thousands of Christians are being deprived of spiritual sustenance, at a time when many feel sorely in need of it.

Other religions are also grappling with the issue and have worked hard to make their places of worship Covid-compliant by, for example, introducing strict booking and ticketing systems.

Many church parishes have adapted by moving services online, a trend mirrored in some Jewish and Muslim denominations. These have been largely successful, and in some cases attracted new audiences from thousands of miles away. However, it's difficult to replicate the sense of community when people can physically and regularly meet up.

One Rabbi I spoke to last summer admitted he was worried some of his synagogue regulars, kept away by Covid-19, might never return.

There's also a financial aspect. Places of worship rely heavily on the generosity of believers. Weekly donations have been hit by church closures, and many revenue-generating schemes, such as hiring out church halls, have been cancelled. Many of the country's ancient cathedrals make much of their income from tourist admission fees.

Different parts of the UK have taken different approaches, with all places of worship currently closed in Scotland, for example. Some Christian leaders, largely accepting of initial closures during the first lockdown, have gradually spoken out in favour of being able to make the decision themselves.

But with most shops and sporting facilities closed in England, some campaigners, such as the National Secular Society, have railed against what they say is "a worrying deference to religious entitlement".

Meanwhile, the Mosques and Imams National Advisory Board has told the BBC although most mosques in England and Wales did open for Friday prayers, the majority in London did not - and it says it has asked its members in areas where the infection rate is rising to work closely with Public Health England and local authorities.

Under the latest lockdowns in the UK, there are changes to usual practices for worshippers of all religions.

In the areas of the UK where communal worship is allowed, a number of measures are in place, such as carrying out services in the shortest possible time, and ensuring worshippers do not mingle with anyone not in their own household or support bubble.

Faith leaders have accepted the need for restrictions.

The Muslim Council of Britain urges "strong caution for mosques wishing to continue remaining open to the public for worship... and for tremendous care to be exercised".

Meanwhile, the Bishop of London, the Rt Rev Sarah Mullally, who has been in charge of the Church of England's plans for resuming services, has said "some may feel that it is currently better not to attend in person... Clergy who have concerns, and others who are shielding, should take particular care and stay at home".