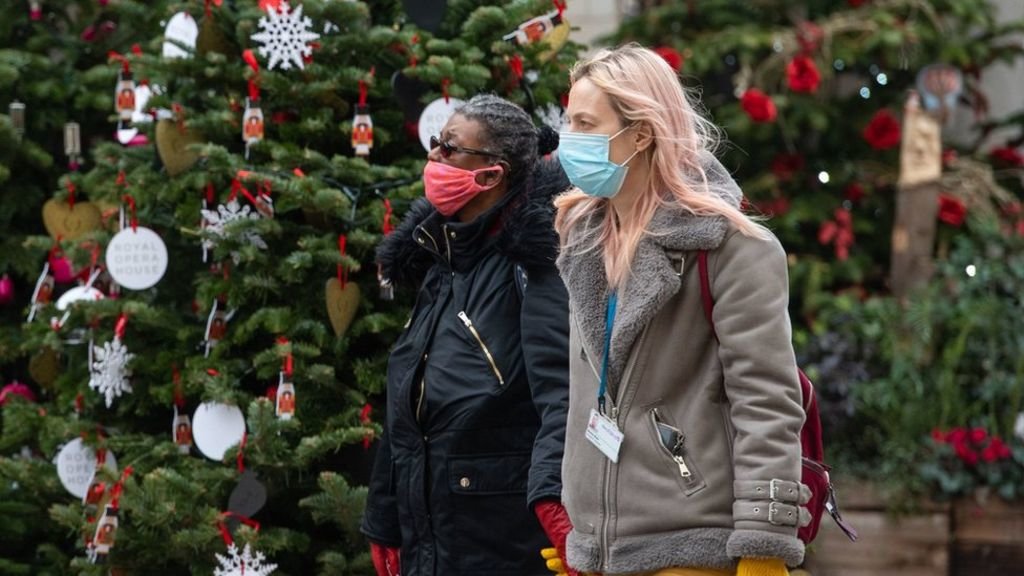 Boris Johnson has urged people to keep Christmas celebrations "short" and "small" to reduce the risk of spreading Covid over the festive period.

Restrictions will still be relaxed between 23 and 27 December - but the PM said people should "think hard" before meeting friends and family.

Three households will be allowed to meet - apart from in Wales where a law change will allow just two households.

And in Scotland people are being asked to only meet on one of the five days.

It comes as the UK recorded a further 25,161 coronavirus cases on Wednesday, along with 612 deaths within 28 days of a positive test.

Speaking at a Downing Street press conference, he said the rules allowing three households to meet over five days were "maximums, not targets to aim for". "It's always going to be safest to minimise the number of people you meet," he said.

After the news conference, the UK, Scottish and Welsh governments issued a joint statement saying this "cannot be a normal Christmas" and that they "strongly" recommended people stayed at home.

They advised people who were visiting others to stop unnecessary social contact as soon as possible and for at least five days before travelling. No one should visit another household if they were ill or self-isolating, they said.

Mr Johnson also advised people to avoid travelling from "high prevalence" areas to those with lower rates of coronavirus and not to stay away from home overnight if possible.

Mr Johnson urged caution over seeing elderly or vulnerable relatives, saying that since the vaccine was being rolled out to these groups "by the early months of the new year", they would be able to meet people more safely soon.

"Whatever your plans for Christmas, please think carefully about avoiding crowds in the Boxing Day sales, and no one should be gathering in large groups to see in the new year," he added.

England's chief medical officer Prof Chris Whitty warned: "Just because you can do something doesn't mean it's sensible in any way."

He urged people to keep their Christmas celebrations small, short and local to reduce these risks.

What are the Christmas rules?

The four UK nations previously agreed a set of rules for the festive period, which has been set down in legislation and is not expected to change in England, Scotland and Northern Ireland - even though the guidance has been updated.

*  Between 23 and 27 December, you can form a "Christmas bubble" comprised of people from three households

*  You can only meet in homes, places of worship or public outdoor spaces - not pubs or restaurants

But in Wales new guidance on households mixing will be put into law, meaning only two households - plus an additional single person who lives alone - will be able to form a Christmas bubble.

UK leaders had come under pressure to review the guidance for Christmas amid rising infections.

In November, all four nations agreed that three households would be able to form a Christmas bubble between 23 and 27 December, allowing them to mix indoors and stay overnight.

However, the Welsh government has now decided Christmas bubbles should be limited to two households - plus an additional single person who lives alone.

First Minister Mark Drakeford also announced the country would head back into a stay-at-home lockdown as soon as the Christmas period was over.

Scotland's First Minister, Nicola Sturgeon, said her "strong recommendation" was to "spend Christmas in your own home with your own household",

She added: "We will set out advice if you are living in any of the nations in one of the highest level of protection - which in England and London is tier three - then we don't think you should be travelling to other parts of the UK."

Northern Ireland's First Minister Arlene Foster said the public must take "all and every precaution" at Christmas and proposals for further restrictions would be brought forward on Thursday.

Deputy First Minister Michelle O'Neill said she recognised governments needed to provide "flexibility" over Christmas and that people needed to take personal responsibility for their actions.

As families decide what to do this Christmas, legally the options are - for the most part - the same.

However, the reality feels very different following today's stern warnings and with a changing health picture.

And while there have been variations in terms of detail and emphasis from UK leaders, the overall memo was essentially this: be very careful, be very cautious.

And just because you can take advantage of an easing in the rules doesn't mean you should.

The planned relaxation was never meant to be a free-for-all. But with this toughened guidance many may feel their options have narrowed.

And for the politicians - they now have to a sell a more complicated public health message. You can take advantage of a relaxation in the rules. But maybe, please - don't.

"We would have liked to have seen a toughening up today from the prime minister - perhaps something like what we've seen in Wales, reducing households," he told the BBC.

"I think he's going to have to go further in the coming days."

An information campaign is expected to be launched in the days running up to Christmas, with people being urged to think carefully before bubbling with elderly or at-risk relatives.

What is the risk of mixing?

Scientists at the University of Bristol studied the implications - and early results, yet to be formally published, indicate the fewer people the better, from the point of view of containing the disease.

If a single-person household joins another household of any size, the impact on infection rates would be marginal, they suggest.

But if all households in the UK paired up with one other, each bubble would contain an average of 4.7 people.

That would lead to a reproduction (R) number within households of between 1.9-2.4. And an R number is above one means the disease is escalating.

The latest advice comes after two leading journals said the "rash" decision to ease restrictions would "cost many lives".

In a joint editorial, the British Medical Journal and Health Service Journal said demand on the NHS was increasing, adding that a new strain of coronavirus had introduced "further potential jeopardy".

Graham Medley, a member of the Scientific Advisory Group for Emergencies (Sage), said the "major driver" for how much the disease spread over the Christmas period was the infection prevalence - and that the current prevalence had started to rise "really quite rapidly in some places".

"When the rules were made about Christmas, we didn't know what that prevalence was going to be," Prof Medley told the Today programme.

As for the risk of the NHS becoming overwhelmed, he said: "We don't have much headroom." 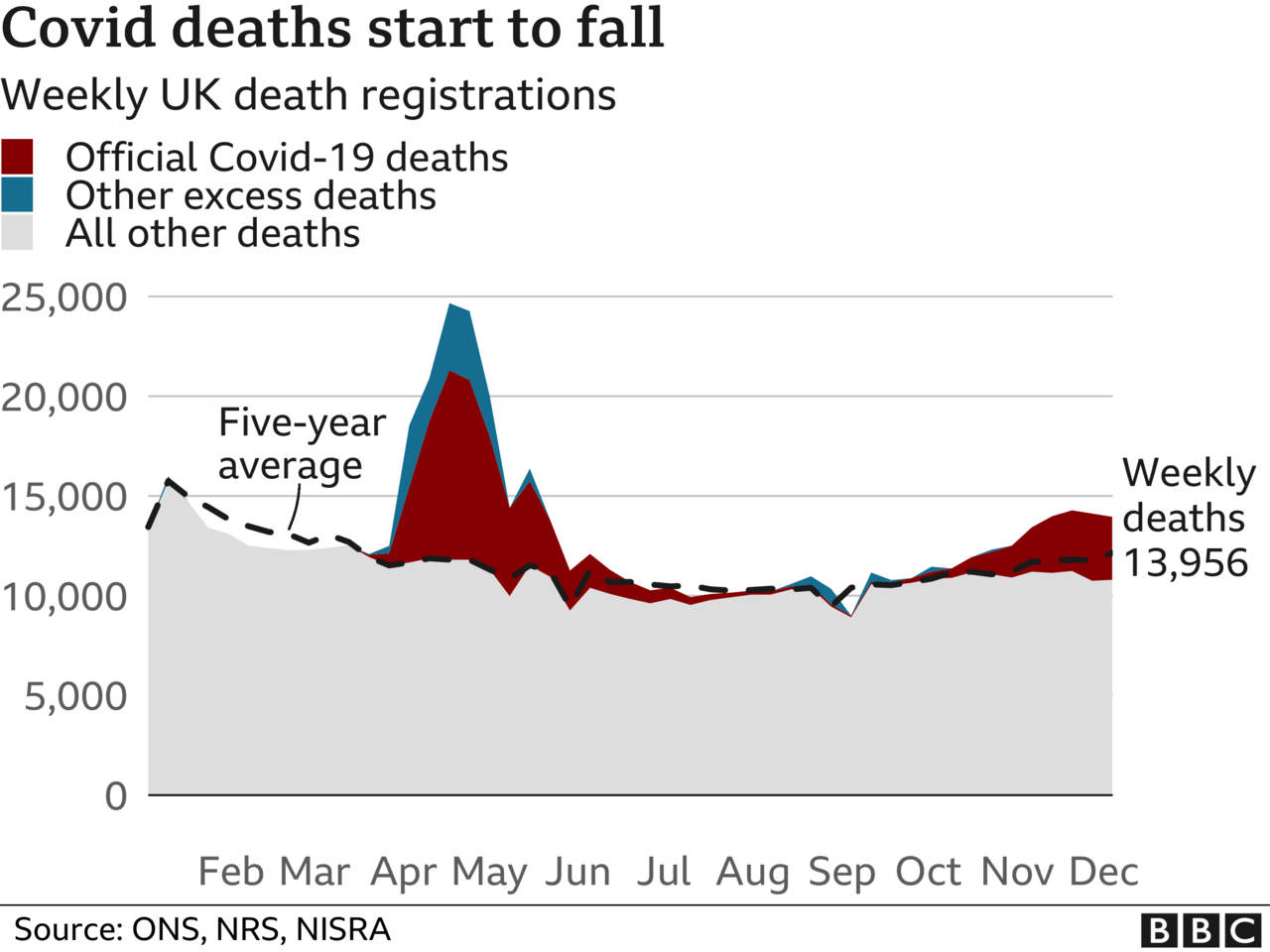