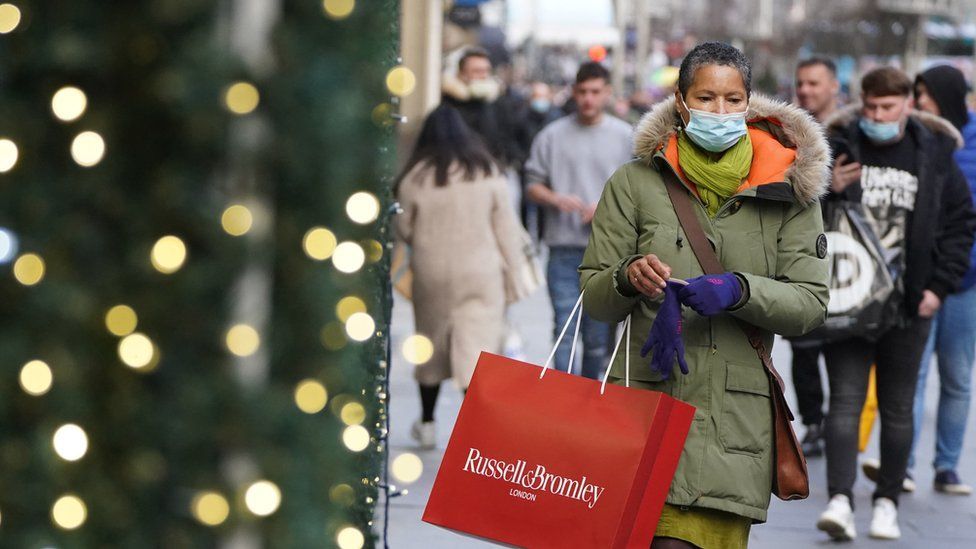 Scotland, Wales and Northern Ireland bring in limits on socialising while England waits for more data.

All three nations have introduced curbs on the hospitality and leisure industry, resumed social distancing rules and put limits on the size of gatherings.

Boris Johnson has not announced any further restrictions in England.

But the prime minister said he would not hesitate to act if necessary.

Daily coronavirus figures are not being reported over Christmas Day and Boxing Day, but Friday saw a new high of 122,186 UK cases.

The Office for National Statistics estimated - using its weekly random testing programme - that 1.74 million people, or one in 35, had coronavirus seven days ago. But that was before last week's big increase in the daily counts, which are based on positive results in tests.

Each of the three nations that has reimposed restrictions has chosen different rules, but they all feature limits on the size of gatherings, requirements for social distancing and tighter rules for pubs, restaurants and leisure venues.

Starting on Boxing Day in Scotland:

One metre physical distancing will be required at public events

Pubs, restaurants, theatres, cinemas and gyms will have to ensure a one metre distance between groups of people

Groups of people meeting will be limited to three households

Table service will be required in hospitality venues offering alcohol

The new restrictions in Wales from Boxing Day mean that:

No more than six people can meet at pubs, cinemas and restaurants

Outdoor events are limited to 50 people, and there is a maximum capacity of 30 for indoor events, including in private homes

Two-metre social distancing is required in offices and public places

Nightclubs have to close

And from Boxing Day in Northern Ireland, nightclubs must remain closed and indoor standing events are banned.

Then, from 06:00 on 27 December, pubs, cafes and restaurants will have to provide table service only, while no more than six people from different households will be allowed to sit together.

Pubs and restaurants in Wales have said they fear they could be "crippled" by new rules for the industry.

Shaun Barnsley, a pub owner in Chepstow, said his takings for December were already 65% down - and the new restrictions had left him feeling "very, very flat".

The return to table service has meant more staff were needed and things were not as jolly as they could be, he said, adding: "It's a struggle."

The new rules mean that Boxing Day football matches in Scotland's premiership will be played in front of a maximum of 500 seated fans, while in Wales all large sporting events will be played behind closed doors.

Meanwhile in England, Covid cases have hit the popular Boxing Day football line-up, forcing the postponement of Premiership games between Burnley and Everton, Liverpool and Leeds United and Wolverhampton Wanderers against Watford.

Although England is the only one of the UK's four nations not to be tightening restrictions after Christmas Day, it has the highest infection rate. In London, the worst-hit region, one in 20 people were thought to be carrying the infection last Sunday.

Mr Johnson, who suffered the largest rebellion since he became prime minister when MPs voted on his Plan B measures earlier this month, said before Christmas that he "can't rule out" further measures after the holiday.

Since then, preliminary findings by the UK Health Security Agency have found the Omicron variant may be less likely to cause serious illness than the previously dominant variant, Delta.

Writing in the Mail on Sunday, he said: "Even with new concrete evidence that the Omicron variant will not cause the devastation first predicted, there are very real fears that, if this year's Christmas has been reprieved, New Year could be cancelled instead. It must not happen."

The UK government is continuing its strategy of encouraging the take-up of booster vaccines to protect against the Omicron variant, sending out millions of text messages on Boxing Day urging people to "get boosted now".