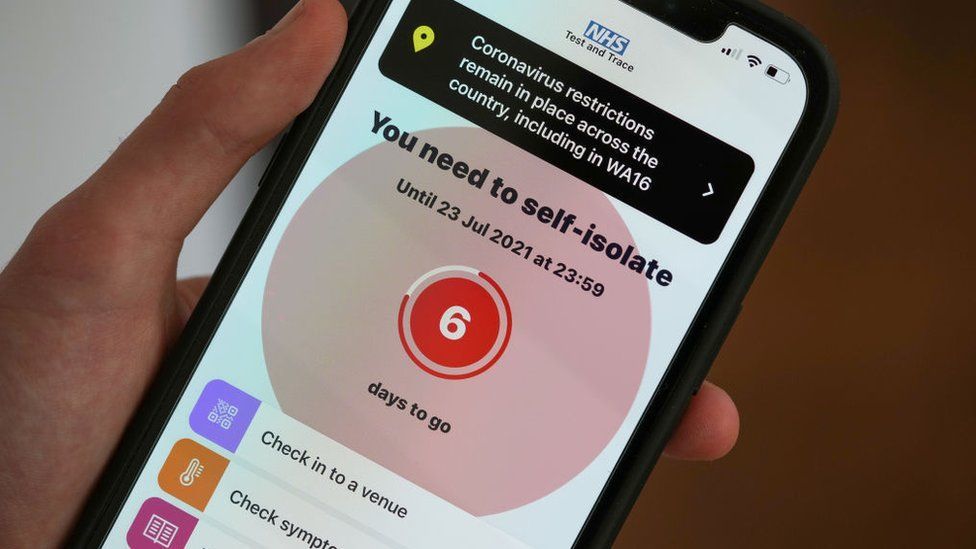 Covid-19: Crucial for pinged people to self-isolate - No 10

Downing Street has insisted it is "crucial" to self-isolate when sent an alert by the Covid app - and businesses should help employees to do so.

It comes after business minister Paul Scully said he would encourage people who are "pinged" to self-isolate but they can make an "informed decision".

The app has always been voluntary to download and any alerts are advisory.

Labour accused the government of "making it up as they go along" and creating confusion.

In recent days, there has been widespread criticism that the app has been sending out so many alerts that hundreds of thousands of people are self-isolating and missing work, causing widespread disruption.

Pub chains, supermarkets, transport networks and other businesses have warned of the crippling effect blanket stay-at-home orders for close contacts were having on their operations.

People who are "pinged" by the NHS Covid app and told they have been in close contact with someone with coronavirus are advised - but not legally obliged - to self-isolate for 10 days.

However, anyone contacted directly by NHS Test and Trace - either by phone, text or email - must self-isolate.

On Tuesday, the UK reported a further 46,558 new daily Covid cases alongside another 96 deaths within 28 days of a positive test.

Meanwhile, a "very small" number of critical workers - including NHS and care staff - could carry on working even if told to self-isolate under a new government scheme.

Industry bodies reacted to the plan with dismay, describing it as "simply unworkable", amid confusion over how it would operate.

Downing Street confirmed the first exemptions had been issued under the scheme by government departments.

No 10 was unable to say how many people the government will approve for the loosened rules.

Plans for the fully vaccinated to be made exempt from self-isolation were delayed until 16 August in England, with ministers warning at the time of a huge knock-on for the economy and workplaces, including the NHS. 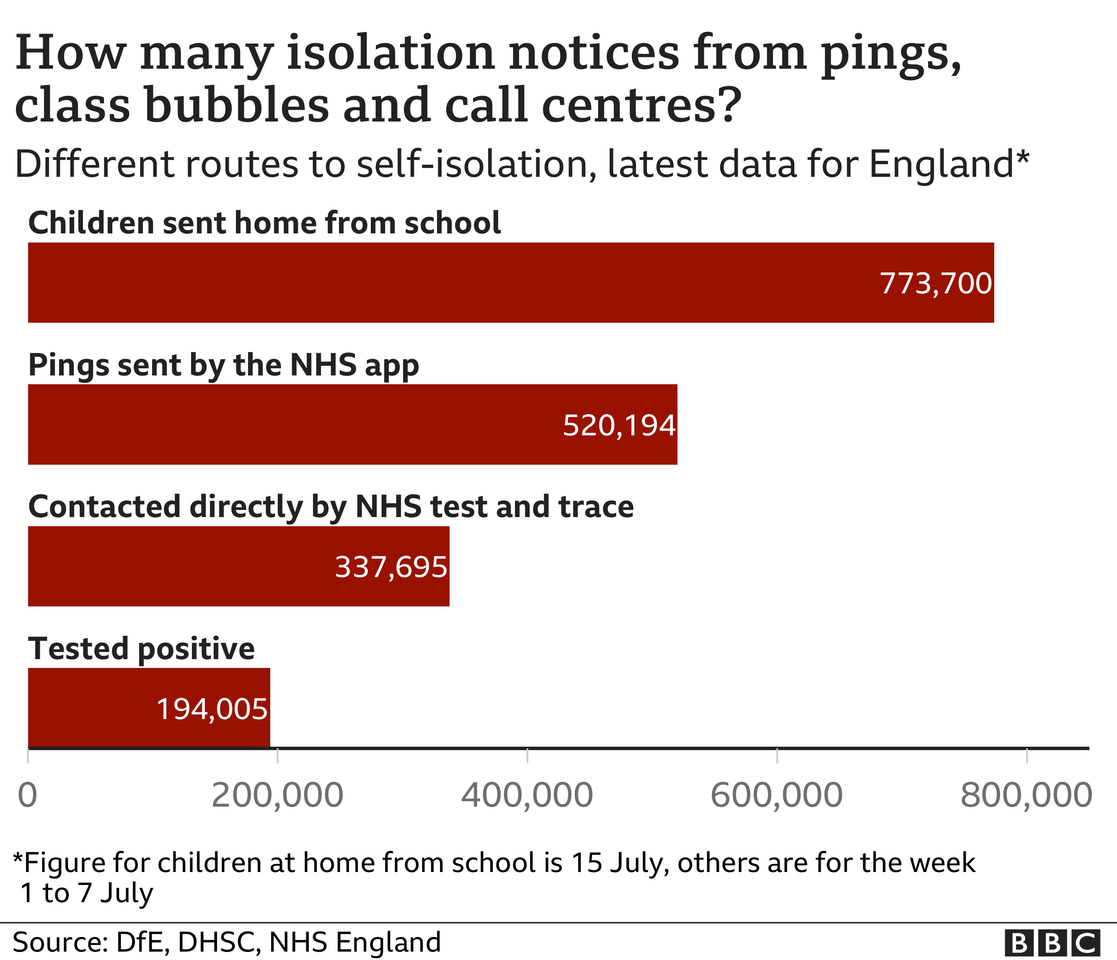 In a BBC interview, Mr Scully was asked whether people should self-isolate if they are "pinged". "I would absolutely encourage people to do that. But they can make an informed decision," he replied.

"I don't want to have to mandate people and tell people what to do as government any longer than I really have to.

"But they do have a responsibility to themselves, to their families and to their communities. It's by doing the right thing that we can keep Covid at bay."

Earlier, he told Times Radio that self-isolating after being told to by the app was a decision for individuals and employers.

"It's important to understand the rules," he said. "You have to legally isolate if you are... contacted by Test and Trace, or if you're trying to claim isolation payments. The app is there to allow you to make informed decisions."

The Times is also reporting that ministers have written to major manufacturers emphasising that staff are not legally obliged to isolate if "pinged". Investment minister Lord Grimstone told one large employer the app was only an "advisory tool" and that people were not under any "legal duty", the paper said.

Following the ministers' comments, Downing Street attempted to clarify the government's position, insisting isolation remained the "most important action" people can take to stop the spread of the virus.

"Given the risk of having and spreading the virus when people have been in contact with someone with Covid, it is crucial people isolate when they are told to do so, either by NHS Test and Trace or by the NHS Covid app," a No 10 spokeswoman said.

"Businesses should be supporting employees to isolate, they should not be encouraging them to break isolation."

Now that legal restrictions have been lifted in England, cases of coronavirus will undoubtedly rise further.

But a significant number of adults are not yet fully vaccinated.

In the meantime, the test and trace system remains the only way the government can contain the virus to a level it deems acceptable.

So the message on how closely people should follow the advice to isolate if "pinged" by the app is crucial.

Although it's not a legal requirement to do so (only if contacted directly by test and trace) any suggestion that it's up to you, optional, or a judgement call risks undermining the government's entire approach.

That's why we saw a junior minister's choice of words was quickly corrected by Downing Street this morning.

Until then the government will have to hope it can keep the public's confidence in the app and its instructions to isolate.

John Edmunds, professor of infectious diseases at the London School of Hygiene and Tropical Medicine and a member of Sage, said contact tracing and self-isolation should be maintained "as stringently as we can".

"We have one of the highest rates of cases in the world right now. The NHS has been under strain for a long time and they are busy trying to catch up on operations and are very, very busy. So to put them under more pressure now is going to be awkward," he told Times Radio.

Justin Madders, Labour's shadow health minister, accused the government of "making it up as they go along".

"Yet again there is more confusion and incompetence from the heart of government at the expense of public health. They need to get a grip," he said.

While the Covid app can only advise people to self-isolate, anyone in England who is called, texted or emailed by NHS Test and Trace must isolate for 10 days.

Failure to self-isolate for the full time period can result in a fine, starting from £1,000.

* In the week ending 9 July, there were 213 deaths involving Covid reported in England, Scotland and Wales - 82 more than were registered the previous week, according to figures from the Office for National Statistics (there were no figures available for Northern Ireland because of a bank holiday)

* More than one million children in England were out of school last week due to Covid-related reasons, government figures show