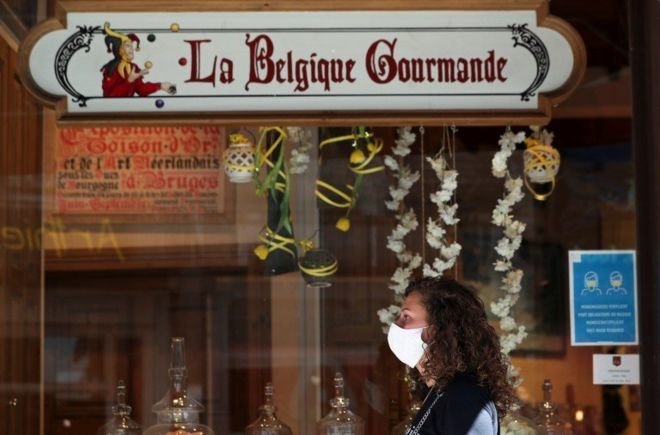 Coronavirus: Travellers from Belgium, Andorra, and the Bahamas must quarantine in UK

People arriving into the UK from Belgium, the Bahamas and Andorra will have to quarantine for 14 days.

Transport Secretary Grant Shapps said the changes start at 04:00 BST on Saturday except in Wales, where they start midnight Thursday.

The countries are the latest to have a change in rules, after quarantines were reimposed for Spain and Luxembourg.

But travellers from Brunei and Malaysia arriving in England and Wales will no longer need to self-isolate.

The transport secretary has previously said he "cannot rule out" other countries being included on the list as the travel advice is kept under review.

People who do not self-isolate when required can be fined up to £1,000 in England, Wales, and Northern Ireland and those returning to Scotland could be fined £480, with fines up to £5,000 for persistent offenders.

According to figures on Thursday, Belgium has a rate of 49.2 new cases per 100,000 people, above the UK's latest rate of 14.3. For comparison, Spain's rate was 27.4 around the time it was removed from the UK's travel corridor list.

Last week, Belgium introduced new restrictions which mean that people can only meet the same five people outside their household in a month.

Coronavirus: How to fly during a global pandemic

Mr Shapps tweeted: "Data shows we need to remove Andorra, Belgium and the Bahamas from our list of [coronavirus] travel corridors in order to keep infection rates DOWN.

"If you arrive in the UK after 0400 Saturday from these destinations, you will need to self-isolate for 14 days."

Scottish Justice Secretary Humza Yousaf said the governments of all four UK nations agreed to the changes "based on a shared understanding of the data".

"Imposing quarantine requirements on those arriving from another country is not a decision made lightly - but suppressing the virus and protecting public health remains our priority," he said

These changes are not going to cause quite the same disruption as we saw when Spain was removed from the exemptions list.

Far fewer Brits head to these destinations; just a few tens of thousands go to the Bahamas each year and it currently has a nationwide lockdown in force.

But the change to Belgium's status will have a knock-on effect for people planning to head to other European destinations too.

Anyone travelling through Belgium will now find they have to quarantine when they get back.

It's also likely to make things a bit nervy for people planning a trip to other, more popular, holiday destinations where Covid rates have been on the rise.

All in all, it looks like the summer getaway is set to stay pretty unpredictable for a while yet.

The UK introduced the compulsory 14-day quarantine for arrivals from overseas in early June.

But the following month, the four UK nations unveiled lists of "travel corridors", dozens of countries which were exempt from the rule, including France, Italy and Germany.

Since then, a few more countries have been added but Spain and Luxembourg have been removed.

It comes as figures showed that demand for the Eurotunnel - which takes people between the UK and France with their vehicles - is recovering to pre-coronavirus levels quicker than air travel.

The tunnel's passenger numbers were down 21% in July compared to July last year - whereas the UK's biggest airlines are operating at less than half their capacities last month.