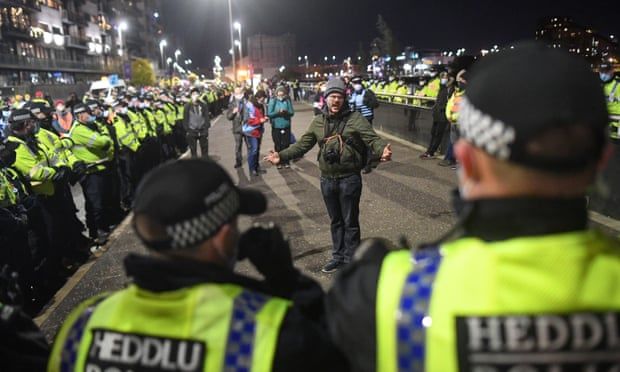 Climate campaigners attending the Cop26 summit are urging Nicola Sturgeon to intervene in what they describe as intimidating and heavy-handed policing of protests in Glasgow.

The open letter from the Cop26 Coalition, Stop Climate Chaos Scotland and the Climate Coalition calls on the first minister to ensure that the right to protest is upheld in advance of Friday and Saturday’s mass marches, after activists reported “numerous incidents of abuse of powers and intimidating tactics” by the 10,000 officers from forces across the UK who have been deployed daily.

The signatories highlight “the disproportionately high number of officers deployed, combined with intrusive police surveillance” which has created “an atmosphere of fear and intimidation” and “unacceptable chilling effect on the right to protest”.

The Guardian has heard first-hand accounts from activists of being threatened with arrest for unfurling a banner at a train station, refused a written receipt after a stop and search and prevented from joining an assembled protest because they were turned back at a police cordon.

These reports stand in stark contrast to Police Scotland’s pledge before the conference of a “human rights-based approach” to policing of protest that would be “welcoming, friendly and proportionate”. 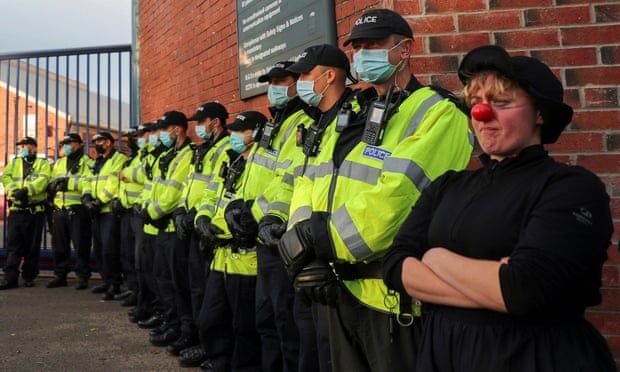 An Extinction Rebellion activist wearing a clown’s nose stands next to police officers during a protest as the UN climate change conference (Cop26) takes place.

Campaigners were particularly alarmed by the use of the tactic of kettling – corralling protesters for a lengthy period of time – at Wednesday’s Extinction Rebellion march through the city centre. Activists reported being refused access to water, toilet facilities and medication during the kettle.

Police Scotland insisted that protesters were “contained for a short period” and this was “necessary in order to maintain public safety”, adding it was “extremely disappointing that officers were assaulted by having paint sprayed in their faces”.

Extinction Rebellion Scotland have since published a video which they say shows an activist trying to use spraypaint on a building and being tackled by officers, who then arrested him for assault.

There are significant concerns that the “saturation policing” seen on the streets of Glasgow so far this week will have a chilling effect on participation at the Fridays for Future school strike on Friday and the Global Day of Action on Saturday, when up to 100,000 people are expected to march through the city. Many of them will be first-time protesters and may not be familiar with the English language or Scots law.

Campaigners argue that these tactics also have a detrimental impact on the community as a whole – on Tuesday, Police Scotland apologised to women in Glasgow who had to walk home in darkness on Monday night after well-lit streets were blocked off due to summit security concerns.

Assistant chief constable Gary Ritchie said: “Police Scotland is a rights-based organisation that puts our values of integrity, fairness, respect and a commitment to upholding human rights at the heart of everything we do. This means that we will protect the rights of people who wish to peacefully protest or counter-protest at Cop26, balanced against the rights of the wider community.”

He added that “containment” was a “permitted policing tactic where a breach of the peace is taking place or reasonably thought to be imminent”.

A Scottish government spokesperson said: “The Scottish government is fully supportive of the right to protest in a peaceful and lawful manner, and welcomes all contributions on how, together, we tackle the climate emergency. Police Scotland has engaged with a wide range of activist groups in advance of the conference in order to facilitate and support their right to peaceful protest.”