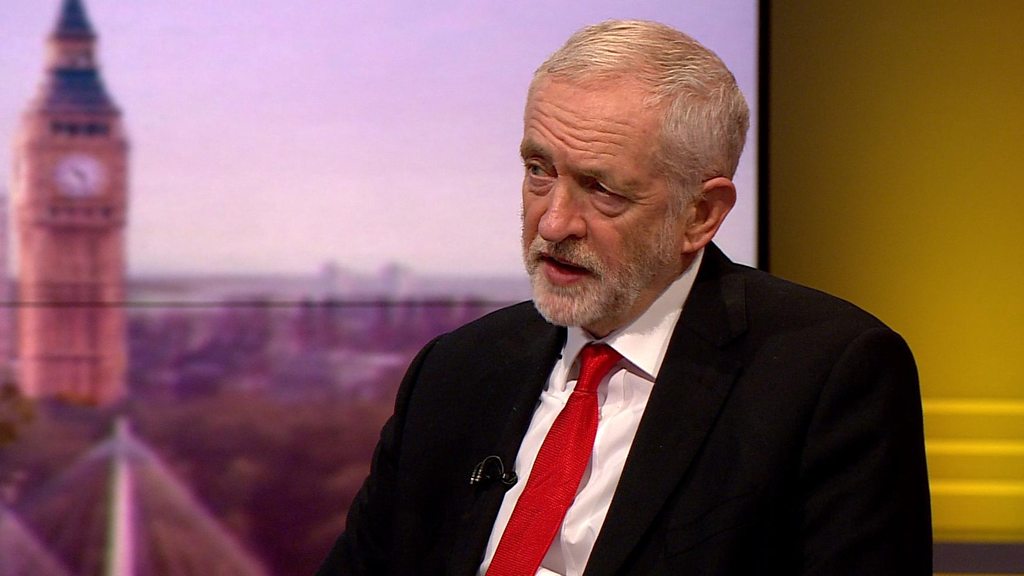 The Conservatives have set out plans for an "equal" immigration system after Brexit as Jeremy Corbyn said he still expected a "great deal" of movement of people from the EU to the UK.

Foreign Secretary Dominic Raab outlined plans to change the rules on benefits which EU nationals can claim in time if they live and work in the UK.

But he said there would be no arbitrary target for total immigration levels.

The Labour leader said immigration was vital for growth and public services.

In a BBC interview, Mr Corbyn defended the principle of free movement, which lets EU citizens travel, live, study and work in any member country but which is currently set to end at the start of 2021.

Migration from the EU had "enriched" the country, he said, and this had to be a part of the close economic relationship he wanted to build with the continent going forward.

Pressed on whether this would involve retaining freedom of movement of people, he said immigration would form part of Labour's Brexit renegotiation if it won the election, but added "there will be a great deal of movement".


The Lib Dems said the Conservatives' plans were based on the false assumption that overseas workers were trying to "do us over".

And business groups said migrant labour was needed at "all skills levels" if the UK was to upgrade its infrastructure and housing.

"When we hear talk about brightest and best, I think that is a worry," Carolyn Fairbairn, the director of the CBI employer's group told Sky News.

The Conservatives have said from the start of 2021, when the post-Brexit transition period ends, immigration rules will apply to EU nationals and non-Europeans in the same way, with no preferential treatment for any group.

Earlier this week, Prime Minister Boris Johnson also said that if he won the election, he would try to reduce the number of so-called "unskilled" migrants coming into the UK.

The issue of immigration has slipped down the list of voter concerns since the Brexit referendum, now at its lowest point for almost two decades.

However, with public services stretched and the NHS under particular pressure, the Conservatives want to respond to the argument that people from overseas add to the burden on the welfare state.

Extending the immigration health surcharge to EU as well as non-EU migrants after the end of free movement is logical, but increasing the charge by 56% carries risks.

The UK government is hoping foreign workers can fill desperate shortages of staff in health and social care. But nurses, doctors and carers are less likely to move to Britain if there are rising costs for them on arrival. Last week, the Tories promised to make it cheaper for foreigners coming to work in the NHS by reducing the cost of a visa. Today's announcement appears to do the opposite.

For all the political parties, there is a balance to be struck between the concerns of some communities which fear immigration will constrain access to jobs and services, and the concerns of employers who argue restricting access to foreign workers may hamper their ability to create jobs or deliver services.

The Conservatives say they would introduce an Australian-style points-based system, which would consider migrants' skills and whether they meet certain criteria.

In recent years, the party had a long-standing goal - first introduced by David Cameron and also a promise in the 2017 election manifesto - to cut net migration to less than 100,000 a year. But the government never came close to meeting the target and faced repeated calls to drop it.

Announcing more details of their immigration policy on Sunday, the Conservatives said the "vast majority" of migrants would need a job offer to come to the UK to work - although there will be a "small number of exceptions" for example high-skilled scientists.

Rules on claiming benefits will be "equalised", meaning that like other migrants, EU citizens would have to wait five years before they can access benefits and will not be able to send child benefit payments abroad.

And the immigration health surcharge - the payment charged to migrants to use the NHS - would apply to all migrants, both EU and non-EU, and would be raised from £400 to £625 a year.

Mr Raab told the BBC's Andrew Marr show that such "granular controls" would help reduce pressure on the public services while ensuring the UK had access to the labour it needed, particularly in the health service.

While the Conservatives were committed to bringing down the overall volume of immigration, he said he would "not fix an arbitrary target".

"We want to be able to plug gaps in specific sectors, whether it is the NHS or elsewhere but what you don't want to do is encourage a reliance on cheap labour from abroad which has a depressing effect on wages," he said.

Also appearing on Andrew Marr, Mr Corbyn said a future Labour government would not "turn its back" on migration from the EU and suggested it would make it easier for the partners and families or those who had settled in the UK to join them.

"There has to be a recognition that our economy and society has been enriched massively by people who have made their homes here," he said. "No Labour government led by me will bring in a hostile environment."

But Mr Corbyn deflected questions on whether free movement could continue in its current form, saying people would have to wait until Labour's manifesto is published on Thursday for more details. He also declined to say whether he wanted the UK to leave or remain in the EU.

The BBC's Iain Watson said there had been a disagreement at a key meeting on Saturday - when Labour's ruling body approved the party's manifesto - on whether to incorporate Labour's conference policy of extending freedom of movement for workers.

Mr Corbyn said freedom of movement would continue if voters back Remain in the new referendum pledged by Labour.

But if voters back Leave, Labour would introduce its own immigration policy, recognising there would have to be high levels of labour mobility.

This, he added, would be underpinned by stricter regulation of the employment market to prevent migrant workers "undercutting" employees here and to stop migrants being exploited.

Lib Dem leader Jo Swinson told LBC that immigration was a "mutual good thing" and her party would oppose all of the changes to benefits and NHS charges being talked about by the Conservatives.

And the SNP's leader Nicola Sturgeon said Scotland needed to maintain a healthy level of inward migration to avoid a long-term decline in the working-age population and the negative impact this would have on taxpayer-funded public services.