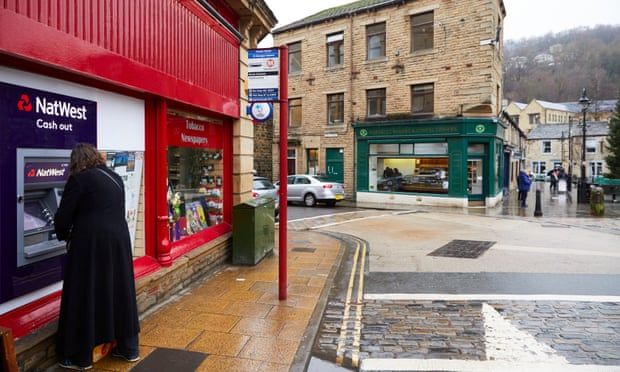 Regulator could fine banks failing to offer withdrawal and deposit facilities within ‘reasonable’ distance
The City watchdog will be handed powers to ensure local communities across the UK have access to cash and could ultimately fine banks that fail to comply.

Under the government’s pending financial services bill, the Financial Conduct Authority will be in charge of making sure the UK’s largest banking and building societies give consumers access to withdrawal and deposit facilities such as ATMs within a “reasonable” distance from their community.

The Guardian understands the FCA could dole out fines if lenders fail to maintain those facilities in line with the legislation, though what counts as a reasonable distance has not yet been confirmed.

News came as Lloyds Banking Group – which also owns the Halifax and Bank of Scotland brands – confirmed plans to close a further 28 branches, leaving the group with 1,387 sites across the UK.

About 5,000 bank and building society branches have disappeared from UK high streets since 2015, resulting in a near halving of the UK’s branch network, according to the Which? consumer group.

The government’s announcement on the FCA was welcomed by campaigners who have long warned that the UK’s dwindling cash facilities are putting elderly and vulnerable people, who struggle to maintain bank accounts online, at risk.

Access to cash has also become more important during banking outages, which can block card transactions and online bank transfers. About 5.4 million adults use and rely on cash on a daily basis, the Treasury said.

Natalie Ceeney, chair of the Access to Cash Review and Cash Action Group, said she was pleased to see the government acting quickly after the Queen’s speech last week. “We need to see the consultation response in full to have a better understanding on how the legislation will work in practice,” she said.

“What’s important is that a lot of work has gone into this over the past few years and I am pleased that parties of all colours recognise the importance of access to cash. It is vital that we all work together to get the best outcome for consumers and small businesses.”
Add Comment