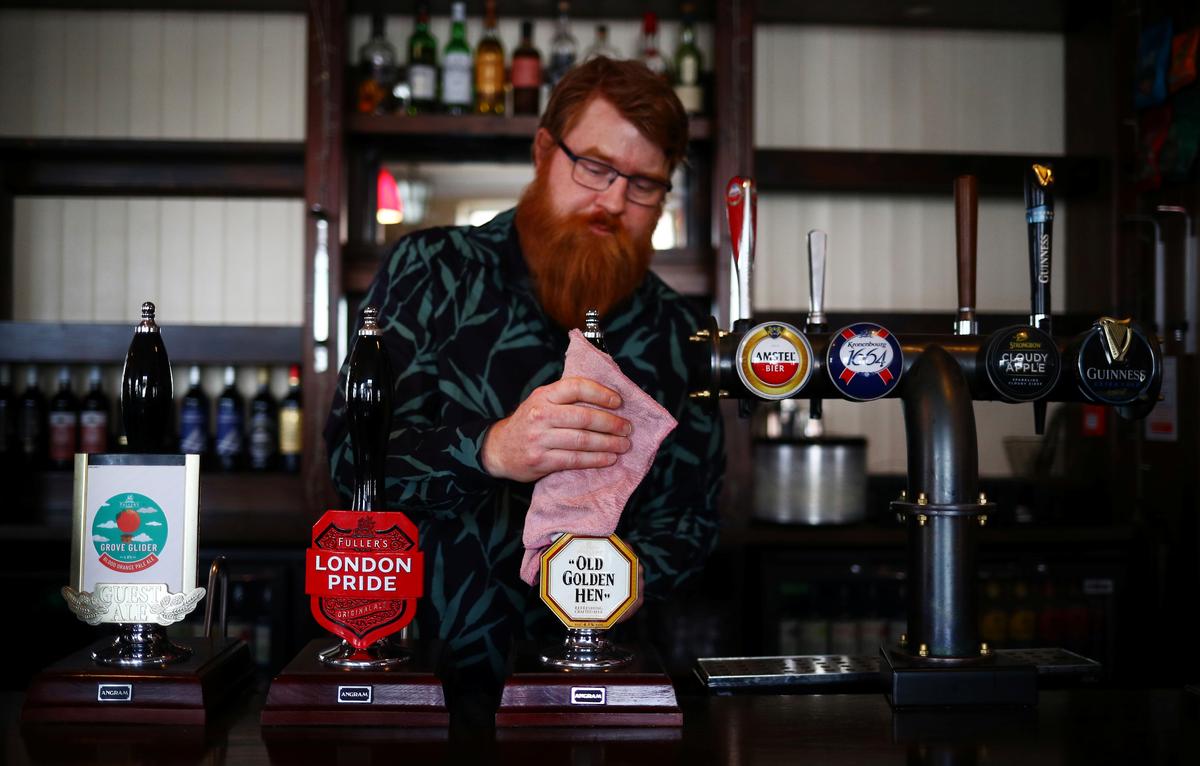 The landlord of the Chandos Arms in Colindale, north London, is looking forward to Saturday - when England's pubs will reopen after more than three thirsty months - with a mixture of excitement and apprehension.

On July 4, Are Kolltveit will welcome back his regular customers for the first time since March 20, when the government closed all Britain’s pubs because of the COVID-19 pandemic.

It was an unprecedented step. Britain’s pubs have traded uninterrupted since medieval times, including through two world wars. The Chandos Arms, which opened in 1912, served fighter pilots training at the Hendon Aerodrome in World War One.

“We’re excited, obviously, but we’re also somewhat worried,” Kolltveit told Reuters. “With social distancing in place it’s obviously a very different experience to come to the pub, but we have tried to the best of our capabilities to put measures in place to make it a safe environment for customers and staff alike.”

Many of the elements that define a pub will be missing when they reopen. With numbers limited, there will be no crowds on a Friday or Saturday night, no standing at the bar, no live music.

A record of customers will be kept, challenging the ethos of a public house open to all without membership or registration.

Nonetheless, Kolltveit said the essential welcoming atmosphere will be in place on Saturday, when pubs in England can reopen. Northern Ireland is one day earlier, while Scotland and Wales follow later in July.

He said customers were keen to come back. “The interest has been tremendous,” he added, with 20 tables prebooked already.

Alan Fraser, a 62-year-old machine operator, said the reopening was “absolutely brilliant” news. “I will go, I will have a pint of real ale,” he said.

Campaign group Long Live The Local said its research showed 29% of people were happy or excited at the prospect of going to a pub this summer, and one in four were planning a visit within a month of reopening.


Dubbed “Super Saturday” by the press, there have been predictions that people hankering for a pint of draft beer will flock to pubs, especially if the weather is good.

The Police Federation has called the easing of the lockdown “a countdown to party time” that will increase pressure on policing due to drunken and irresponsible behaviour.

London police chief Cressida Dick has put “extra resources” in place. “My message is: if you’re coming out on Saturday, be calm, be sensible,” she told BBC radio.

Not all pubs are opening on Saturday. Young & Co’s, for example, is waiting until July 20.

JD Wetherspoon, one of the biggest chains, is opening all its pubs in England. But with capacity limited, it is encouraging customers to come Sunday to Thursday. “Monday is the new Saturday,” it said.

At the Chandos Arms, Kolltveit is not too concerned about crowds. “I hope there will be a good turnout,” he said. “I’m open for 12 hours so people are able to spread it out - they don’t have to come for the 12 o’clock opening.”

He said he needed customers through the summer, not just on one day.

Social distancing has cut capacity at the pub, which was crowned “best local” in the 2019 Great British Pub Awards, from 250 to 80 seated inside, plus 40-50 outside on a nice day.

Kolltveit, who is not opening his kitchen in the first phase of easing, said his pub was viable for “four, five, six months” at half capacity. By then, he hopes the government will be able to ease measures further.

“I’m positive, I think there’s still a future for the pub in the UK,” he said. “I am confident there will be a positive outcome down the line. The question is obviously, financially, can you survive until that key turning point?”