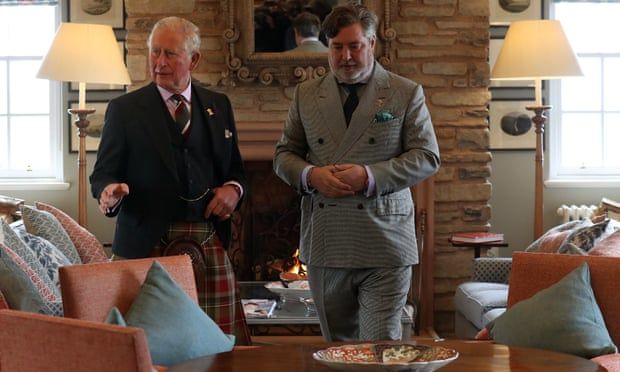 Charles has ‘no knowledge’ of alleged offer of honours, says

At least two complaints have been made to the Metropolitan police over allegations that a wealthy Saudi businessman was offered help to secure an honour and British citizenship after donating to Charles’s charities.

The former government minister Norman Baker and the campaign group Republic have said the allegations should be the subject of an investigation.

Michael Fawcett, a former assistant valet to Charles, temporarily stepped down as chief executive of the Prince’s Foundation after claims by Sunday newspapers that he helped coordinate an honour relating to Dr Mahfouz Marei Mubarak bin Mahfouz.

Mahfouz, who received a CBE in 2016, donated £1.5m to restoration projects close to Charles, including Dumfries House, where a garden and fountain are named after the prince, and Castle of Mey in Scotland, where a wood bears his name, the Sunday Times reported, adding that Mahfouz had denied any wrongdoing.

The Prince’s Foundation is conducting an investigation.

A Clarence House spokesperson said: “The Prince of Wales has no knowledge of the alleged offer of honours or British citizenship on the basis of donation to his charities and fully supports the investigation now under way by the Prince’s Foundation.”

Norman Baker, a former Liberal Democrat minister, wrote to the Metropolitan police commissioner, Cressida Dick, to urge a police investigation into the affair.

Baker said a letter, published by the Mail on Sunday, allegedly from Fawcett to an aide at the Mahfouz Foundation, appeared to be “prima facie” evidence of an offence.

In the 2017 letter, Fawcett allegedly wrote that in the light of Mahfouz’s ongoing generosity “we are willing and happy to support and contribute to the application for citizenship”, the Mail on Sunday reported. It added that they were willing to seek to upgrade the CBE to KBE.

Baker, an author and critic of the royal family, said he had written to Dick “to say that in the light of the full transcript of the letter, there appears to me to be prima facie evidence that an offence has been committed under the Honours [prevention of abuses] Act 1925.”

“If politicians had engaged in selling honours, or in offering support for citizenship, they would be in big trouble. And the same thing should apply to Prince Charles,” he said.

Baker believes any investigation should examine what Prince Charles was aware of at the time.

A second complaint to police was made by the anti-monarchy campaign group Republic. Graham Smith, Republic CEO, said: “Failure to properly investigate these matters will damage public trust in the police, the royals and the honours system.”

The Times reported that Charles was “100%” behind the offer to help the Saudi billionaire, according to a fixer, described by the newspaper as a paid adviser to Mahfouz, and the royal had met Mahfouz in Riyadh, Clarence House, and at Dumfries House, in 2014 and 2015.

Baker said he believed the questions lead directly to Charles. “Of course,” he said, describing Charles and Fawcett as “Tweedledum and Tweedledee”.

The prince gave Mahfouz, 51, his “honorary” CBE – for those who are not British or Commonwealth nationals – at a private ceremony at Buckingham Palace in November 2016.

Fawcett, who in 2003 was cleared of financial misconduct allegations over the selling of royal gifts, was appointed chief executive of the Prince’s Foundation in 2018 after a reorganisation of Charles’s charities.

A Clarence House spokesperson said: “It is right that the Prince’s Foundation is taking the investigation so seriously and we will not be commenting further whilst it is ongoing.”

Fawcett began his royal service in 1981 as a footman to the Queen, before rising through the ranks.
Add Comment