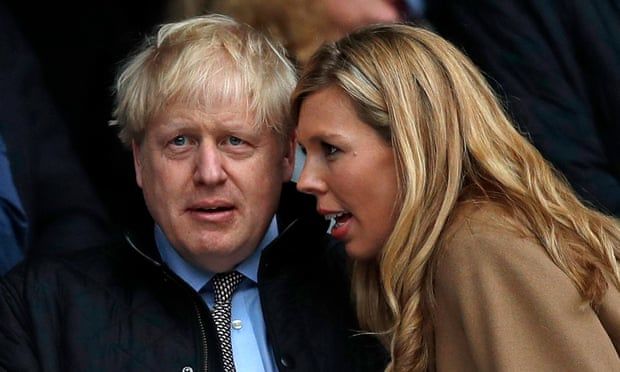 Boris Johnson’s inner circle imploded so spectacularly in recent days that only one close political confidante from the early days of No 10 remains: his wife, Carrie Johnson.

The most powerful prime ministerial spouse in recent memory, the 33-year-old Johnson has a job of her own for a wildlife charity, but multiple sources from Downing Street past and present say her influence on the prime minister’s operation is undeniable.

In the recent clearout, two of her allies, Henry Newman and Simone Finn, appear – so far – to have kept their jobs.

And those who know her say she is determined to keep Johnson in Downing Street, despite the scandals over No 10 parties – some of which she attended – and the funding of No 11 flat refurbishment, which was her project with celebrity designer Lulu Lytle.

The flat refurb, involving gold wallpaper and a £112,000 price tag, has seen critics brand her “Carrie Antoinette”, a label she is known to dislike. But one former Downing Street insider says there was a different nickname for her – Ann Boleyn.

Her rivals cast her as the much younger wife trying to have too much political say and manipulate an egotistical leader.

The prime minister would also tell aides that if he didn’t take a particular course of action, it would anger his wife.

They also reported Johnson himself receiving scores of messages from her during the working day - and Carrie Johnson repeatedly calling his staff, insisting the prime minister be hauled out of meetings to talk to her.

Those political aides who have crossed her – former strategist Dominic Cummings, and for a while, election guru Sir Lynton Crosby – have certainly found themselves cast out, while many on the right side of her have prospered politically, including friends such as Nadine Dorries, the culture secretary.

But there is more than a whiff of sexism about such descriptions, according to the female Tory MPs she has befriended.
Advertisement

It is also acknowledged even by some of her friends, though, that she has tried to have her say on policy issues, texting or WhatsApping ministers directly to share her views. This is mostly about her interest in the environment, which has given her a bond with the prime minister’s father, Stanley, and the wealthy Tory peer, Zac Goldsmith.

The most controversial claim is that she was behind the government’s decision to repatriate the animals of Pen Farthing from Afghanistan to the UK, which a Foreign Office email suggests was authorised by the prime minister – something he rejects. A friend says that she strongly denied having anything to do with it, telling them that women and children should be the priority and that it was a complex issue.

One person who knows Symonds well says she is more interested in cutting plastic waste than net zero, but that she is “very genuine”. 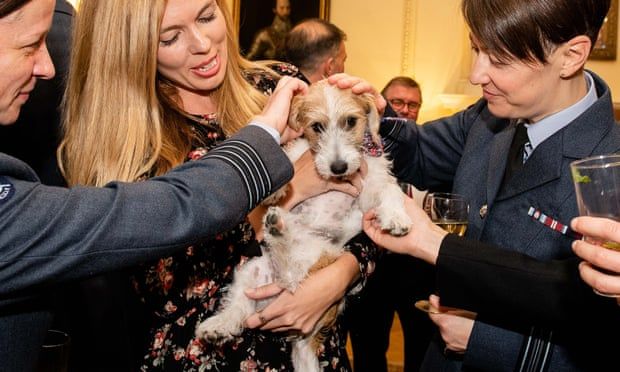 Carrie Johnson holds their pet Jack Russell dog Dilyn as she talks with members of Britain’s military in 2019.

They claim her job for the Aspinall Foundation, a conservation charity behind two safari parks in Kent, is a consuming one, from which she is not taking maternity leave. Her focus at the moment is on the charity’s campaign to get elephants repatriated to Africa, and trying strike a deal with Netflix for a documentary about it.

Friends say she is “tremendously fun and entertaining”, with definitive views of her own. They describe her as sending volleys of WhatsApp messages one evening, falling out the next day and then being back in touch as if nothing had happened after that. Another person who knows her from Warwick university days as a theatre and art history student says she has always been the “very definition of capricious”.

In this context, the Mirror has described the prime minister’s wife as “addicted to parties” – with three she reportedly attended during lockdown named in the Sue Gray report and now under police investigation. These include a Downing Street garden party on 20 May 2020, a gathering in the Cabinet room for Johnson’s birthday on 19 June 2020 and a party in the No 11 flat in November 2020. This was the night of Cummings’s departure from Downing Street with No 10 staff reportedly hearing music blaring out into the room below, believing it to be a “victory party”.

She is known to have a penchant for Abba, with Finn having hosted an Abba-themed 30th birthday party for her.

This has led to awkward scenes with the prime minister, with one insider saying he had been “made to dance like a performing monkey to Abba” with her much younger friends.

A few journalists have been known to socialise in the Downing Street flat and at Chequers, theprime ministerial country retreat in Buckinghamshire. During the Euros 2020 last year, the Johnsons entertained the Sun editor, Victoria Newton, and a political journalist there to watch the England v Scotland football game. No 10 said the rule of six was followed at all times.

Those who know the Johnsons say they prefer to be at Chequers at weekends and, occasionally, Carrie stays on after Boris has returned to London.

As well as having a one-year-old and a newborn, her own job, and a husband who is in serious trouble, a major part of her life is also Dilyn the dog. She is said to dote on the Jack Russell cross, despite those who have been around him describing him as a “handful”, who snaps at ankles and was once blamed for urinating in an aide’s handbag.

Cummings and several other sources have spoken of her fury at a media story suggesting the Johnsons might want to rehome Dilyn, with some in No 10 discussing the possibility of a complaint to the press regulator.

And as for her relationship with Johnson , an adviser who worked on the prime minister’s leadership campaign saw him occasionally frustrated with her, but also at that time having the appearance of a “devoted puppy” towards her. Certainly, he backed her over Cummings, when the pair clashed in November 2020, leading to his departure.

Carrie Johnson’s spokeswoman said Mrs Johnson had “for some time been the subject of a targeted briefing campaign to discredit her”. She added that “Carrie had absolutely no involvement in the Pen Farthing evacuation” and that she did not discuss it with the campaigners, the prime minister or his aides.

Since his departure from government, Cummings has been open about trying to remove his former boss and wife from No 10, describing her as a “wrong un” and someone who was leading the premiership towards “inevitable disaster”. 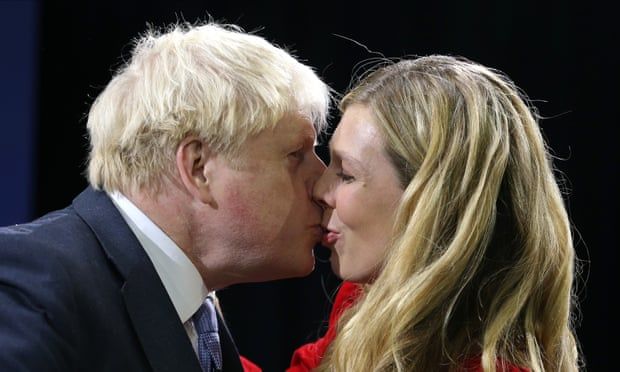 More recently, Cummings has claimed she was initially a strong supporter of him joining the Downing Street operation as she had a “good sense of PM’s limitations”. But he added: “ I think she thought once the majority was won, she should take over as the main influence on him with her people in key roles below.”

With almost all the prime minister’s most longstanding aides now gone, Carrie Johnson has little competition any more.

But with Johnson’s premiership most likely entering its end phase, how much is that position of influence worth any more?

Anna Soubry, a former Tory minister who has worked with Carrie Johnson in the past, said she thought it was a shame that she would now be forever associated with Boris Johnson’s likely short-lived premiership.

“I think she is a remarkably talented, hugely able, lovely person, but she has hitched her wagon to this disaster of a man. And it actually shows you in a way that she is honourable, that she has stood by him.”