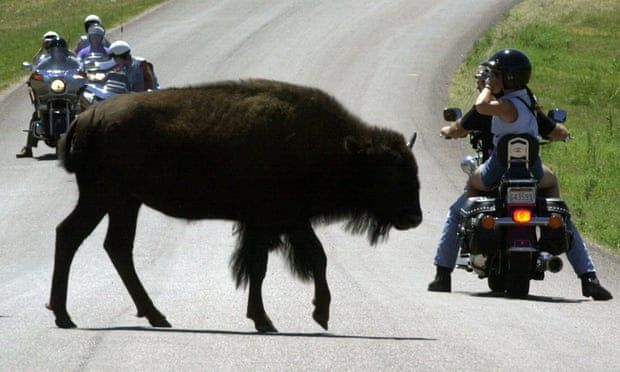 Amelia Dean, 19, was attacked by the animal while hiking with a friend through Custer State Park, South Dakota

A British woman has been left partially paralysed after being gored by a bison that tossed her 15ft into the air in a US nature reserve.

Amelia Dean, 19, was attacked by a large male American bison while hiking with a friend through Custer State Park, South Dakota, seven weeks ago.

She was left bleeding heavily after the bison charged and one of its horns pierced her left thigh, severing the femoral artery and damaging nerves in her lower leg and between her thighs, according to her parents Matthew and Jacqueline Dean.

After the attack, the animal, which can reach a size of more than 6ft and weigh up to 907kg (2,000lb), stood near the backpacker’s head until her friend managed to lead it away and called the emergency services.

“I remember feeling the pressure on my hip. My hip being pushed back and I remember the sensation of flying in the air and going head over heels,” the teenager told the local station KOTA-TV from her hospital bed at Monument Health in Rapid City, South Dakota.

“The bison stuck around and his hooves were right over my head. I remember them being like right by my head,” she said.

“It’s a surreal enough experience let alone the fact that we weren’t doing anything that really warranted it. We were just having a walk in the park,” she told the local TV station.

Her parents have launched a GoFundMe in a bid to raise the £140,000 required for her to undergo specialist treatment at the Mayo Clinic in Rochester, Minnesota.

The couple, from Brockham in Surrey, hope to secure specialist care from a peripheral nerve surgeon to treat their daughter’s paralysis and severe nerve pain in her left lower leg.

In a plea for donations on their fundraising page, her parents wrote: “This could be Mia’s best chance to regain control of her foot, and time is running out.

“We are beyond fortunate that our daughter is still breathing, as she should have bled out in two to eight minutes after the severed artery and the ambulance didn’t arrive for 20 minutes. It is a miracle that she is alive today.

“We … simply wish for her to be able to walk and dance again and live her life to the full, without chronic long-term pain.”

The couple added that although their daughter’s travel insurance has paid for the femoral artery bypass, the insurer has refused to pay for an examination of her nerve injury by the specialist.

The teenager was attacked on the second day of a US road trip, near the end of her gap year after travelling around Europe. She was due to start studying at the University of Edinburgh next month.

But she said she hoped her ordeal would not deter others from travelling. “This is a freak accident – this isn’t going to happen every time somebody walks in a park. Hopefully.”