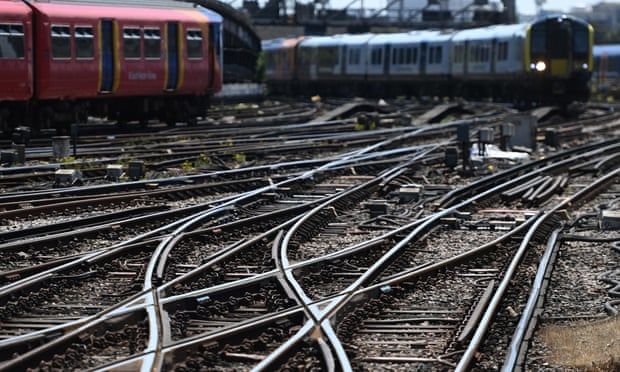 Britain’s rail strikes: which trains will be running where and when?

The biggest national rail strikes in 30 years are due to take place next week. Here’s how services will be affected

Only about half of Britain’s rail network will be open on the strike days – Tuesday 21, Thursday 23 and Saturday 25 June – with a very limited service. Trains will only run between 7.30am and 6.30pm. Intercity main lines and urban services will be most likely to function. Some places will see no services at all.

On Wednesday, Friday and Sunday about 60% of the service will run, starting later than usual. A few Monday evening services will terminate earlier.

Network Rail said passengers should check ahead with train operators. Most have advised to only travel if necessary on strike days. A full strike timetable is expected to be published later this week.

A separate tube strike in London is due on Tuesday 21 June.

*  Avanti West Coast Expects to run one train an hour from London Euston to each of Manchester, Liverpool, Birmingham and Preston, with a limited service to Glasgow. No trains serving north Wales, Shrewsbury, Blackpool or Edinburgh.

*  Chiltern Two trains an hour from London Marylebone, only running as far north as Banbury.

*  Cross Country Still finalising but services to Penzance, and between Bristol and Birmingham, will not run.

*  c2c Two trains an hour between London and Shoeburyness in Essex.

*  East Midlands Railway One fast train an hour between Nottingham, Sheffield, Corby and London; one an hour on routes between Derby, Matlock, Nottingham, Leicester and Sheffield. Other lines closed.

*  Govia Thameslink Railway Two trains an hour on most routes – from Brighton to London terminals on Southern, and on the major Thameslink and Great Northern routes. No trains before 7.15am on non-strike days.

*  Greater Anglia Services will only run on the main lines into London Liverpool Street, with one train an hour from Cambridge and Norwich, and two from Stansted.

*  Great Western Railway No services west of Cardiff or Plymouth on strike days.

*  LNER Running a higher proportion than most – nearly 40% – but recommends avoiding travel, with last services between Edinburgh and London departing in the early afternoon.

*  Northern Advises not to travel from Tuesday to Sunday. Extremely limited services around cities and no services at all in many areas on strike days.

*  Scotrail One to two trains an hour on routes between Glasgow and Edinburgh; no service north of Falkirk.

*  Southeastern Only services into London Bridge, as far as Dartford and Orpington, and between St Pancras and Ashford via Ebbsfleet on the high speed line.

*  South Western Two fast trains an hour to/from London Waterloo and Southampton; four an hour to Woking and Windsor, two to Basingstoke, rest of network closed. Some trains start at 7.15am.

*  TransPennine Very limited service. Roughly one train an hour between Manchester and York, every two to four hours on other routes, and no trains at all to stations including Scarborough and Hull.

*  West Midlands Very limited service between Birmingham and Wolverhampton; no trains at all on many routes, including on non-strike days.

*  Transport for London Avoid travel on Tuesday when the tube strike will close the underground. Tube services disrupted early Wednesday. London Overground and outer sections of the Bakerloo, District and Elizabeth lines will be affected and curtailed on national rail strike days.

Transport for Wales Not directly in dispute, but nonetheless all services will be suspended bar some of the Core Valley Lines routes around Cardiff.