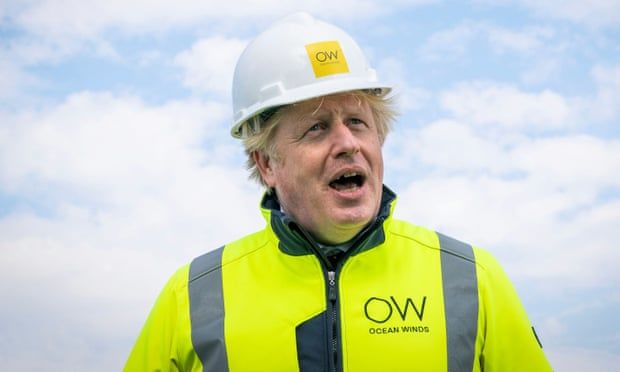 Britain needs big ideas for big problems, but its leaders don’t appear to have any | Isabel Hardman

If Boris Johnson and Keir Starmer harbour grand ambitions about tackling climate change, crime and inequality, they should do something about them
Boris Johnson and Sir Keir Starmer both pitched up in Scotland last week for two-day trips that were supposed to show that the two leaders have important things to say about the union and the big issues that face the UK. On the surface, Starmer had a more successful visit: unlike Johnson, he didn’t decide to launch his own Edinburgh fringe show complete with the sort of jokes that would empty even the smaller-capacity venues that this year’s Covid-secure event is running.

The prime minister’s quip about Margaret Thatcher giving Britain an “early start” in decarbonisation by closing so many coal mines is the only thing anyone will remember of this foray north of the border. Then again, the only thing of note that Starmer managed to say was that he thought Labour should be proud of what Tony Blair, the only Labour politician to have won an election for the party since the 1970s, had achieved. It might challenge some in his movement, but it’s hardly radical stuff.

Both men have a clear grasp of the big issues facing the country. Neither seems able to say anything that remotely matches up to those challenges. Johnson’s climate spokeswoman, Allegra Stratton, has been doing the heavy lifting on the need for governments to be far more ambitious as the Cop26 summit in Glasgow approaches, but she also found herself being sucked into performing her own one-woman fringe show with a monologue on how it’s not that easy being green.

While Stratton has been candid about the problems with the electric car charging network for a family such as hers, Johnson’s contribution to the debate has been to set everyone off on an angry row about the damage his own party did to mining communities in the 1980s.

It’s not just climate, though. Johnson recently spent a week focusing on crime and Starmer has been trying to improve the way Labour talks about the matter. Both have seen the polling showing that it is one of the biggest issues for voters after healthcare. Once again, both have only responded with a small offer. Johnson’s “Beating Crime” strategy was thin and derided by police chiefs as “gimmicky”.

It included policies that have been around since the dawn of political gimmicks, including greater visibility for people carrying out community sentences and a named police officer for each neighbourhood. It’s a wonder that another stock nonsense policy, declaring that homeowners who defend their properties against burglars will receive better protection in law, didn’t make it in there too.

Despite repeated pledges to better support victims, the government hasn’t yet made clear how it will resource policies that will mean rapists are more likely to be brought to justice, nor have they responded to campaigners’ pleas for better legislation preventing “digital strip searches” of victims. Then there’s “levelling up”, which Johnson tried recently to turn from a nebulous concept into part of his political legacy.

The tagline for his fringe show here would be “with hilarious consequences”, as everyone came away from his “big” levelling-up speech none the wiser as to what it meant, only that the prime minister thinks that it’s important and good for prosperous areas in the south of England as well as northern and Midlands seats.

What’s going on? Why is everything so small? Johnson’s political career has been wound around big moments, from Brexit to Covid. He’s not a politician who delights in the little things; unlike Theresa May, he didn’t spend years enjoying public service in local government before moving to the national stage.

Many commentators have attributed his coal mines quip to him still having the mindset of a columnist who can make sardonic jokes that are taken in the spirit in which they are intended. Perhaps he still approaches policy in the same way as a journalist who has the luxury of pointing out problems without the responsibility of having to work out how to solve them and then implement that solution.

His colleagues in government still think Johnson is ambitious for radical thinking. He recently sat the cabinet down and gave them a lecture about being ambitious. One minister who was there paraphrases it as: “He said, you guys are incredibly powerful but sometimes you don’t realise how powerful you are because it’s easy to get boxed in by the confines of the Whitehall machine. Now you’ve got the power. Let’s get out and use it. Climate change was one of the things he listed and big infrastructure projects.”

If he’s relying on his ministers to come up with the big ideas, he needs to lecture them some more. And work out how to deal with one of the biggest blockages that he didn’t think to mention when talking about politicians being “boxed in”: the Treasury.

It was the Treasury that was responsible for that “levelling-up” speech being so thin. One cabinet minister observes: “They had hoped to have enough to pull out the levelling-up white paper and give the big speech on it, but they ended up just doing a small speech. Everything is taking longer than they’d hoped. There’s no sense in putting stuff out in a big plan that the Treasury keeps blocking.”

This minister and many others blame the chancellor, Rishi Sunak, and his colleagues for holding up policies, batting down request after request for a policy to be funded with the not-unreasonable response that “this is subject to the spending review”. But Johnson should know that the spending review in the autumn will not suddenly bring a cornucopia of well-funded, exciting policies.

He has already clashed repeatedly with Sunak over the cost of big ideas – as well as smaller policies – and the chancellor is determined to win more battles and limit spending in the coming months. The climate crisis issue is obviously much harder than whether the public or, indeed, Johnson’s colleagues will embrace electric cars in the near future. But Stratton was right to highlight the problems with the UK charging network for people taking long journeys: most motorway service stations have only two charging points, maintained by one company and are not supported at the weekend, meaning that if you find one out of order, you are stuck without help.

Once again, this is an example of the government not matching up to its initially ambitious language: a strategy on building a charging network has taken much longer to be drawn up than expected. Johnson’s defenders point out that Britain is still leading the way on plans to ban new petrol and diesel cars by 2030, while Joe Biden has only set a target for 50% of new vehicles in the US to be electric by that date. But there’s a lot of work to be done before that ban seems realistic.

Then there’s the difficult conversation with the electorate that everyone in government is swerving about the cost of the green measures necessary to cut emissions from domestic housing. Powerful and well-organised backbenchers such as Steve Baker are far ahead of ministers in their thinking on how the price of green boilers will go down with the public. They’re prepared to talk about it, but so far ministers aren’t.

There’s no real pressure on the climate or indeed anything else from Starmer. The Labour leader has fallen into the same trap as Johnson of thinking that because he’s talked about something in a speech or an interview, he’s definitely taking it seriously. But what green policy has Labour unveiled in recent months that’s had the Tories worried? Nothing. Even Ed Miliband enjoyed more success with his energy policies when he was Labour leader, forcing David Cameron to come up with an energy price cap in response to his own proposals for a freeze on bills.

Johnson is lucky to have Starmer, who was supposed to give a “big vision” speech at the start of this year but who has ended up generally agreeing with the government but in a special, disappointed voice. They delight in the differences in their personalities, but both men are more similar than they’d admit. They’ve had an extraordinary two years in the job, tackling some of the biggest issues any leader could imagine. But both seem to have run out of puff, suggesting in the things they say that the challenges this country faces are quite small and easily solved.
#Boris Johnson  #Joe Biden  #Johnson  #Covid
Add Comment