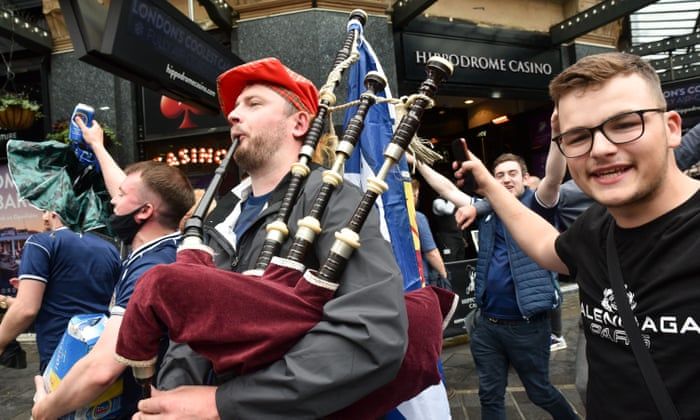 Bring the noise! Tartan Army descends on London ahead of Scotland v England

Scottish fans chant ‘No Scotland, no party’ as thousands travel to London for Euros 2020 match

On the quiet, sodden streets of central London, you heard them long before you saw them. It might have been only half a dozen fans, wearing disposable ponchos and clutching plastic bags of cans, but they sounded like a battalion. “When you hear that noise of the Tartan Army boys, we’ll be coming down the road.”

On Friday, for one afternoon only, Soho belonged to Scotland. The Euro 2020 fixture with England at Wembley – in which Scotland had the best of a 0-0 draw – had been preceded by a week of warnings: of 20,000 Scots descending on the English capital, of hordes of kilted masses wandering the streets without tickets or a pre-booked pub table to call their own. It was a situation that necessitated interventions from the mayor of London, Sadiq Khan, Scotland’s first minister Nicola Sturgeon, and the UK government’s sports minister, Nigel Huddleston. “Remember you are guests in London at the moment, so make sure you behave in a way that shows the Tartan Army at its best,” said Sturgeon on Friday. There were other calls for calm and consideration for public safety, which were absent for the 12,000-a-day crowds attending Royal Ascot earlier in the week.

Several thousand travelled but those who did were of a mind they were fulfilling a very real need. “No Scotland, no party”, they sang as they colonised a short terrace of pasta restaurants off the south side of Leicester Square, a de facto Tartan Army HQ after no fan zone had been provided for the travellers and Hyde Park had proven simply too wet to occupy. 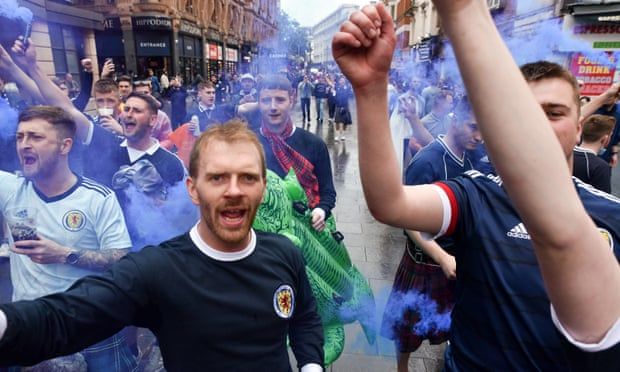 Scotland fans in London’s West End before the match with England.

“We’ve been itching to see the team”, said Brian McEwan, a fireman who had travelled down for the game with half-a-dozen friends, two of whom had tickets for Wembley. “It’s been 23 years since Scotland qualified for a major tournament and we’ve just spent a year under restrictions. Of course we were going to come, but we’ve all been scrambling around for places in bars so that we can see the match. It’s not been set up correctly. I don’t know if it’s the mayor of London, but they’ve been ill-prepared.”

In years past, Scottish fans have always gathered in Trafalgar Square before Auld Enemy matches, dancing around the fountains and maybe filling them with fairy liquid. This time around not only were they greeted by unremitting torrential rain, but also by 2 metre-high hoardings that cordoned off the square for a “fan park” that was accessible only to London’s key workers.

Of all the people who deserve to be treated well after the past year it’s key workers, but while no Scots had any complaints about this decision, there was widespread bewilderment at why something else could not have been laid on instead. Another common theme, however, was the willingness to improvise. At lunchtime, five young men from Falkirk arrived at the closed-off fan park. They turned around and booked tickets for the National Gallery instead.

Videos of Scottish fans staggering into moped drivers and coming off the better, or of impromptu water slides across the puddles of Leicester Square have been spreading across social media. By 10.30pm on Friday night, the Met reported, they had made 18 football-related arrests in central London and Wembley for a mixture of offences including an assault on a police officer.

Every fan the Guardian spoke to claimed to at least have a reserved place to watch the match and while it was impossible to deny that the crowd outside MOD Pizza were breaching the rules of social distancing, it was also the case that the Scottish fans brought an energy to this part of London that is currently eerily lacking. Soho traders report footfall at being just 25% of normal, outdoor dining at night just “putting on a show of normality”. Boisterous noise is usually inescapable in central London, on this afternoon it felt like a welcome relief.

For Scottish fans the feeling was mutual, as the opportunity to make some noise had been a long time coming. “We’ve been waiting 20 odd years for this,” said Evelyn McLaughlan who’d travelled from Perth with her family. “We’ve come down for the atmosphere, to be with other Scottish fans. We’re mingling together and everyone’s all so friendly. If we lose, it doesn’t matter to us, what counts is that we made it here.”