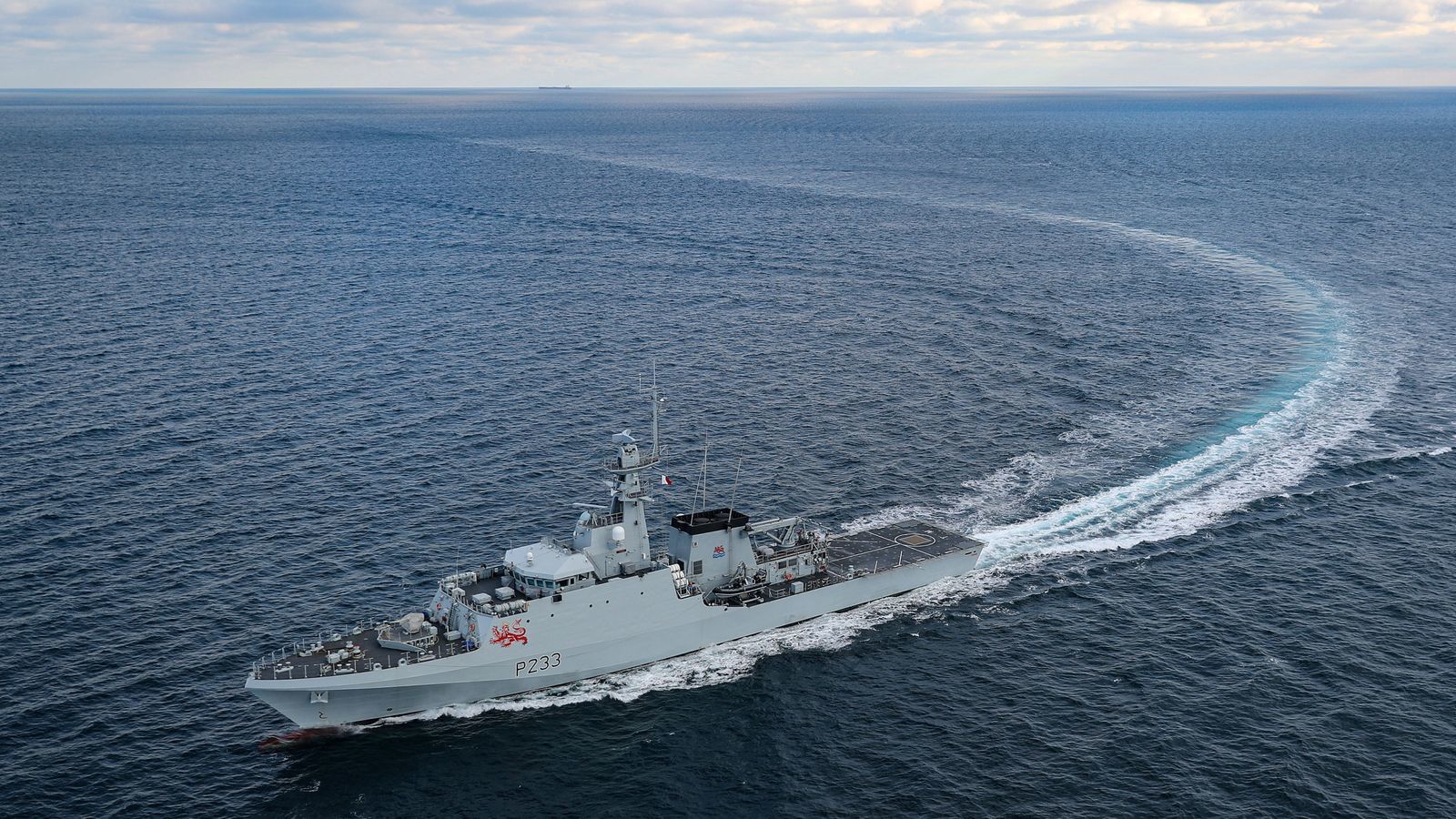 France has threatened to cut off Jersey's electricity as it says fishing licences are being granted with conditions not agreed.

The UK is sending two Royal Navy ships to Jersey "as a precaution" after threats of a French blockade of the island's main port over a post-Brexit fishing row.

"The prime minister and chief minister stressed the urgent need for a de-escalation in tensions and for dialogue between Jersey and France on fishing access," a Downing Street spokesman said.

"The prime minister underlined his unwavering support for Jersey. He said that any blockade would be completely unjustified. As a precautionary measure the UK will be sending two offshore patrol vessels to monitor the situation.

"They agreed the UK and Jersey governments would continue to work closely on this issue." 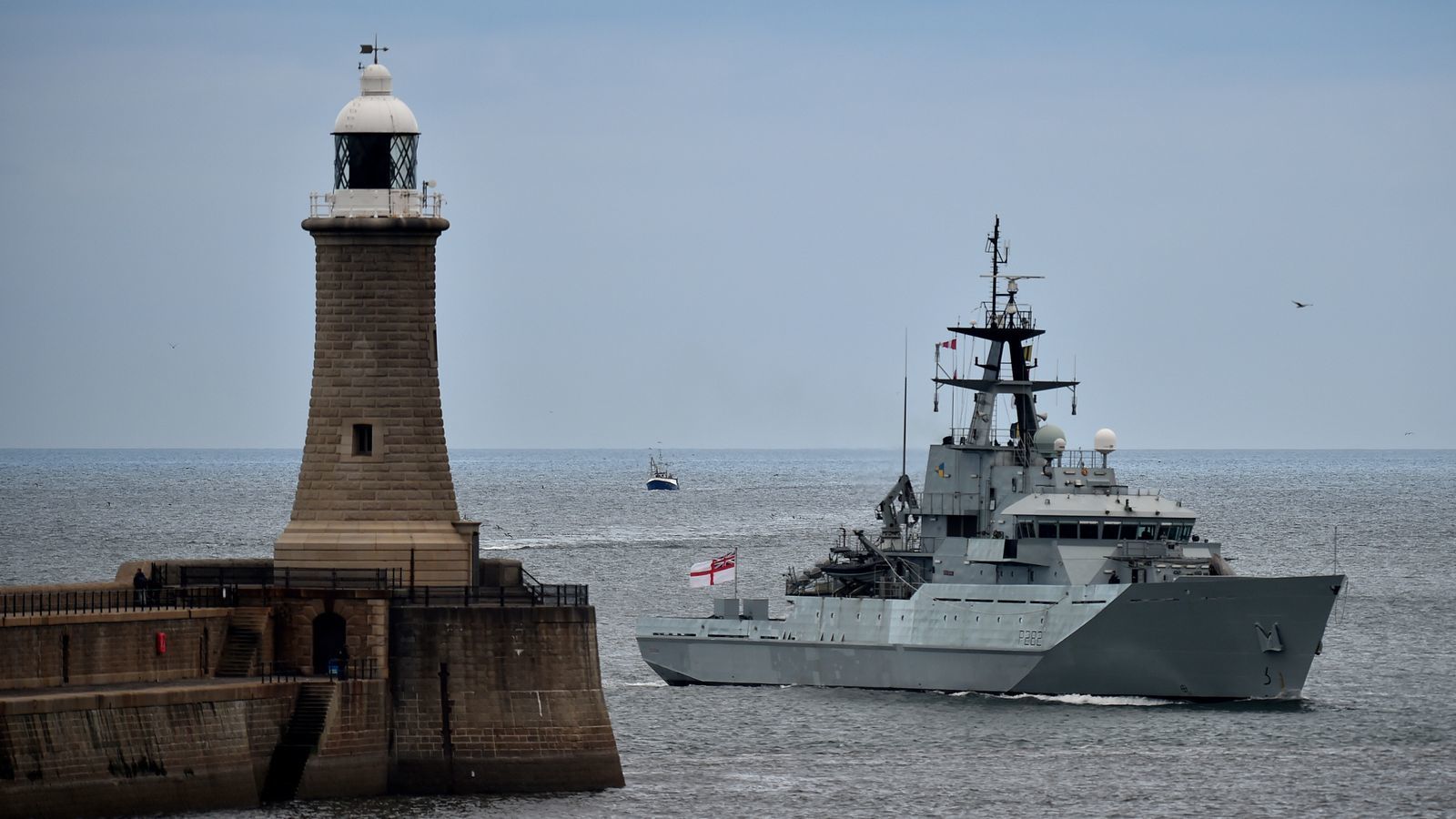 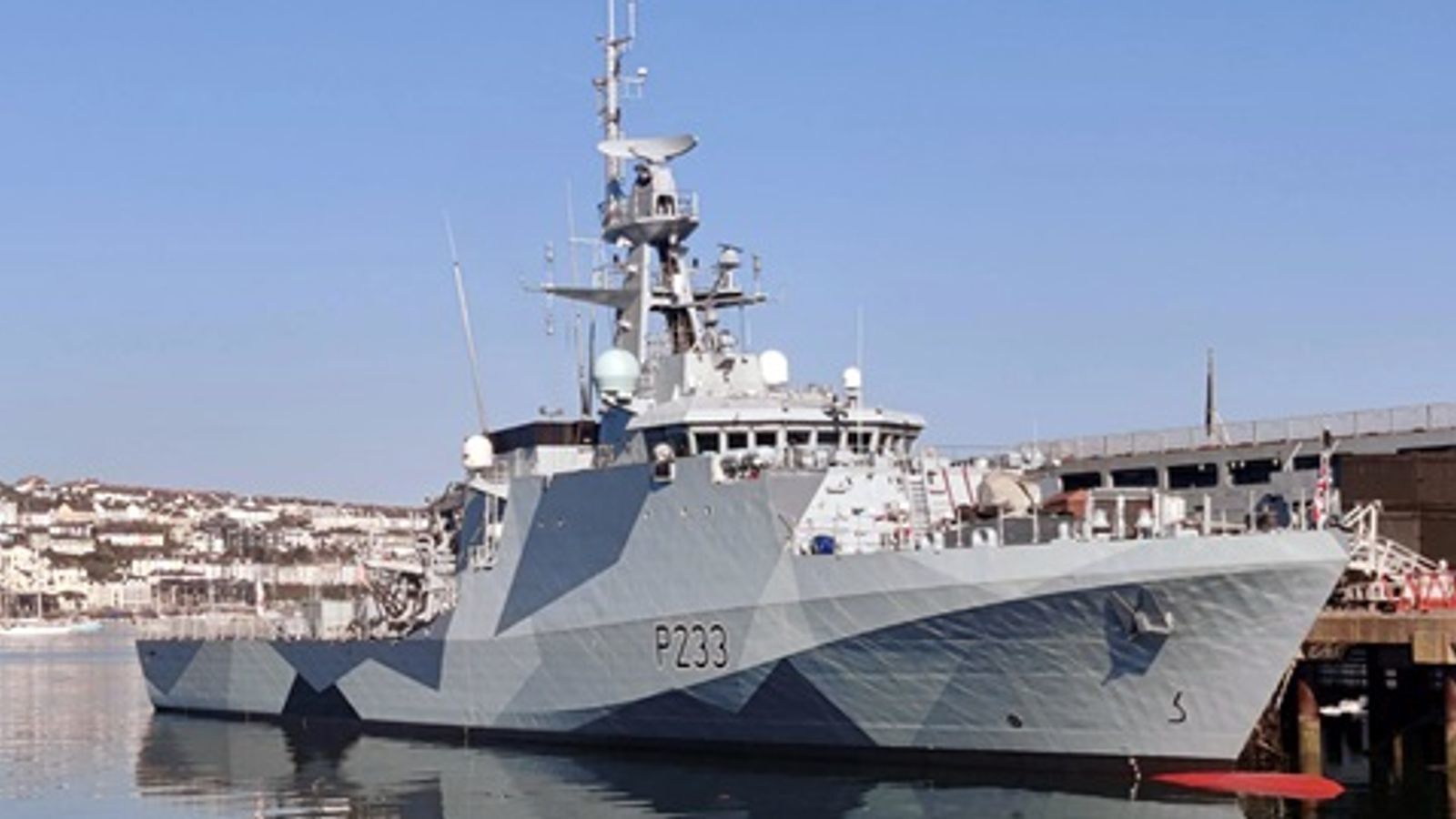 A Ministry of Defence spokesman confirmed HMS Severn, described as being able to mount fishing vessels for inspection, and HMS Tamar, one of the Navy's newest warships, were being deployed to Jersey "to conduct maritime security patrols".

"This is a strictly precautionary measure and has been agreed with the Jersey Government," he added.

France earlier threatened to cut the island's electricity off and French fishermen threatened to blockade the main port of St Helier to prevent supplies from being delivered.

Up to 100 French fishing boats are due to enter the harbour on Thursday at 6am to prevent the Commodore Clipper, carrying cargo, from docking in Jersey, according to local paper the Bailiwick Express.

French officials also said they will be closing their Channel Islands' offices and will stop importing Jersey products into France.

France accused the UK of using red tape to limit fishing around Jersey, in breach of the Brexit agreement made with the EU last year, and said it is "ready to use these retaliation measures".

"With regards to Jersey, I would remind you, for example, of electricity transmission by underwater cable. So, we have the means," French maritime minister Annick Girardin said. 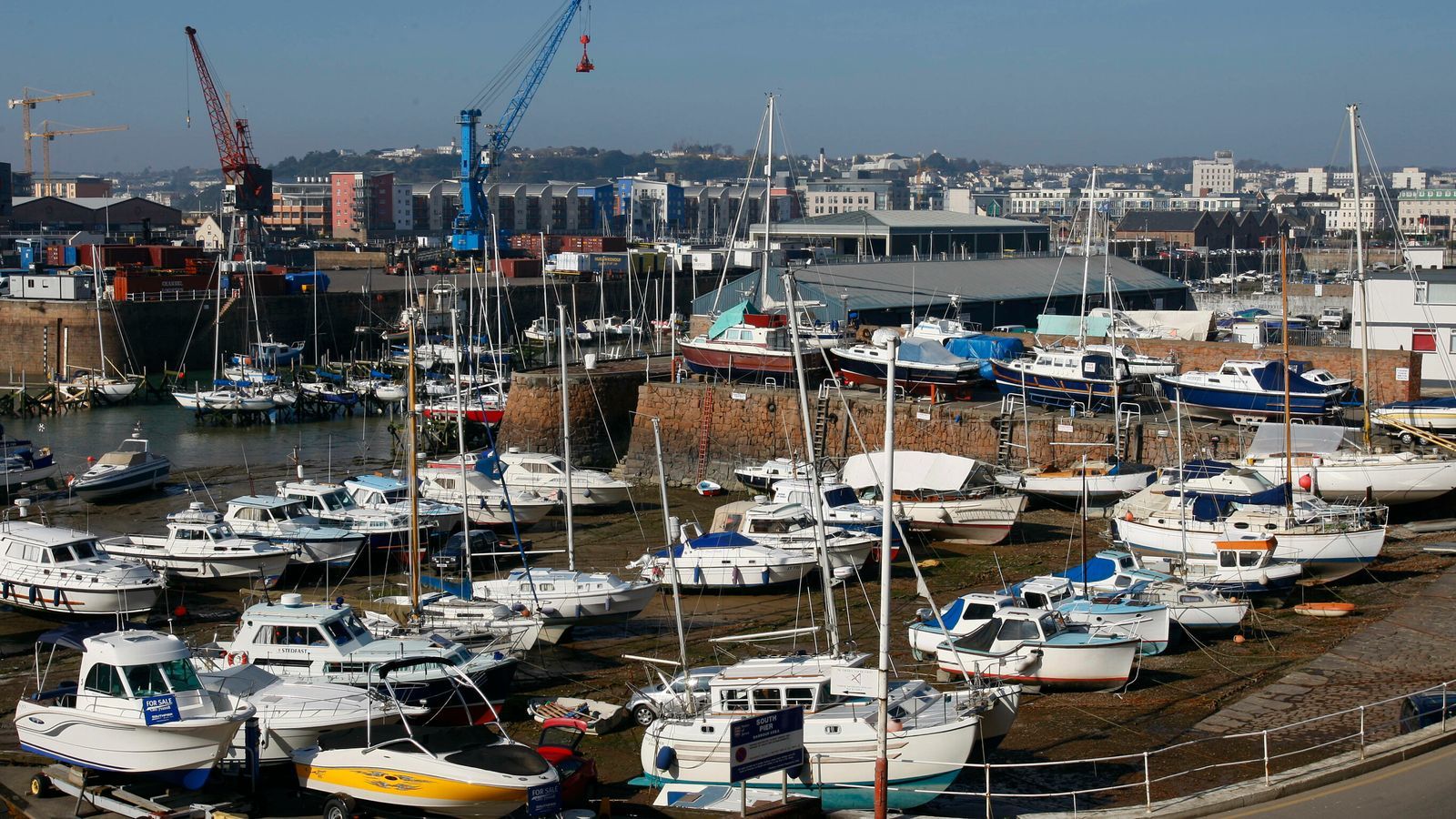 French fishermen have threatened to blockade the port of St Helier 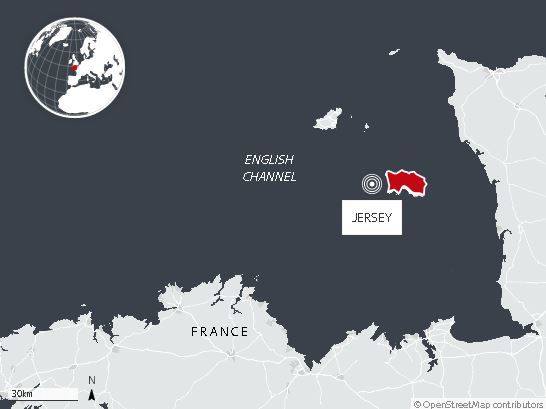 The UK's environment and food secretary George Eustice said the row was about 17 French fishing vessels that have failed to provide the data needed for Jersey to grant them a licence to fish in its waters.

Ms Girardin said the authorisation of 41 boats to fish in Jersey waters had been accompanied by new demands "which were not arranged or discussed, and which we were not notified about".

The demands set out where ships could and could not go, how long fishermen can spend at sea, and what machinery they can use, she added. 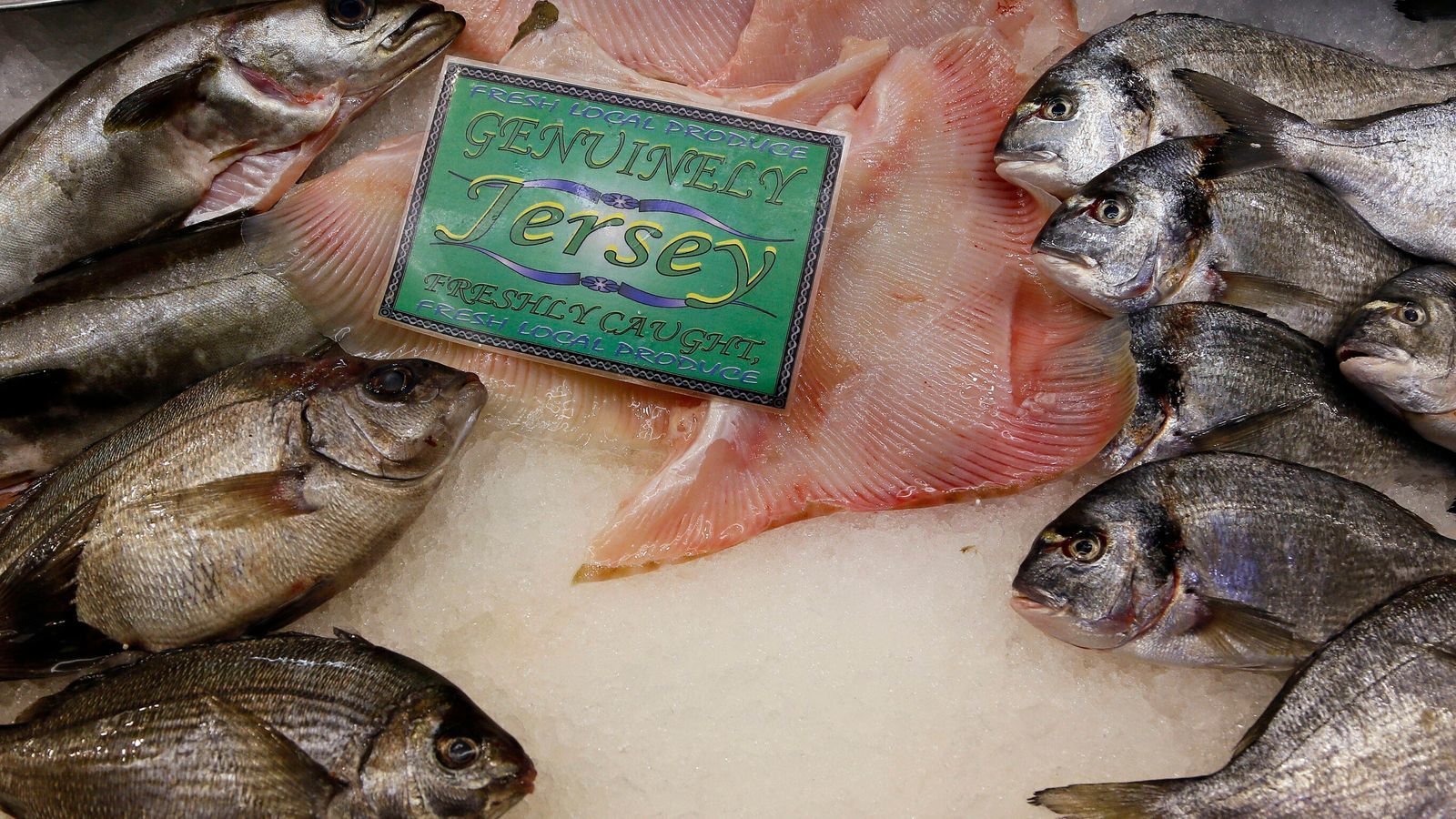 Mr Eustice said the UK has been asking the European Commission for the data needed to complete the licence applications and will issue them "as soon as they have provided that data".

"I think the threat that was made is completely disproportionate and unacceptable," he said.

"We are working through the agreement, Jersey have already licensed over 40 vessels, they've been very pragmatic throughout this.

"They've also been clear that they'll process the remaining 17 or so as soon as they put forward the data, so I think it's unacceptable to make those sorts of comments."

Mr Eustice said "a small number" of French authorities or individual French fishermen have been "difficult to identify" and get the data from but Jersey has issued temporary licences as vessels gather the data.

Analysis: Downing Street is sending a strong message to France

Protecting UK fishing waters is one of the Royal Navy's oldest tasks, but Downing Street's decision to send two warships to the Channel Islands is a deliberate posture after France's initial threat to cut off electricity to the islands.

HMS Tamar and HMS Severn are OPVs - Offshore Patrol Vessels. Despite the rather lowkey name, they are sophisticated ships, especially Tamar which only entered service in 2020 and is equipped with the latest radar, sonar and weaponry technology.

The Royal Navy provides its ships to the UK government (Defra) for a set number of days each year to assist in patrols of waters around England, Wales and Northern Ireland. The devolved Scottish government has its own fleet.

The UK's Exclusive Economic Zone is the fifth largest in the world, extending 200 miles from the coast. The Royal Navy's role in UK waters is to prevent overfishing by foreign vessels and to enforce quotas. This has long been controversial but Brexit has made it more so.

Sending OPVs to Channel Island waters is, in itself, not controversial, but people I spoke to in the MoD and Royal Navy were not made aware of the announcement until late on. Fisheries post-Brexit were always going to be controversial, but it seems Downing Street is puffing out its chest and sending a strong message to Paris.