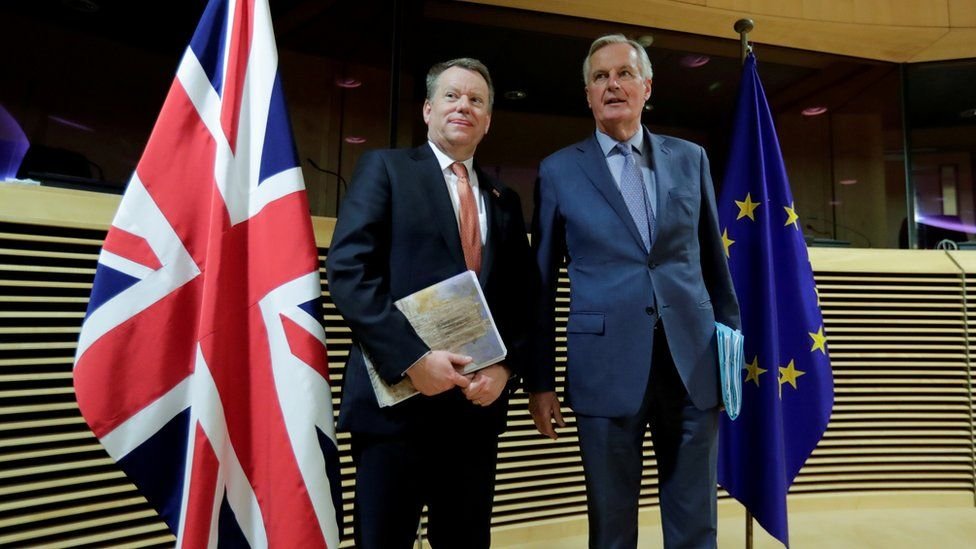 The UK's new trade deal with the EU marks "the beginning of a moment of national renewal", Boris Johnson's chief Brexit negotiator has said.

The agreement was announced on Christmas Eve, after months of fraught talks on issues such as fishing rights and business rules.

Lord Frost described it as "one of the biggest and broadest" ever.

MPs will vote on the deal in Parliament on 30 December, with the UK to exit existing trading rules on 31 December.

The European Parliament also needs to ratify it, while EU ambassadors received a Christmas Day briefing on the trade deal from EU negotiator Michel Barnier.

A 1,246-page document, which has been published on the UK government's website, sets out the post-Brexit relationship with the EU and includes about 800 pages of annexes and footnotes.

Speaking to reporters on Saturday, Lord Frost said: "There's no more role for the European Court of Justice, there's no direct effects of EU law, there's no alignment of any kind, and we're out of the single market and out of the customs union just as the manifesto said we would.

"All choices are in our hands as a country and it's now up to us to decide how we use them and how we go forward in the future."

Senior members of the UK negotiating team added the deal allowed for a "managed divergence" from EU rules and standards.

A free trade agreement usually rules out tariffs being applied to imported goods. Under the terms of this deal if either party acts in a way the other views as anti-competitive, they can go to an independent arbitrator. If that doesn't resolve the complaint, either party can impose tariffs.

The French Minister for Europe Clément Beaune said: "There is no country in the world that will be subject to as many export rules to us as the UK."

But the UK negotiators described the rules as "standard" for third party trade deals.

'This deal or no deal'

Labour leader Sir Keir Starmer - who campaigned against Brexit - said the deal did not provide adequate protections for jobs, manufacturing, financial services or workplace rights and was "not the deal the government promised".

But with no time left to renegotiate, the only choice was between "this deal or no deal", he added.

European Commission President Ursula von der Leyen described it as "fair" and "balanced", saying it was now "time to turn the page and look to the future".

Lord Frost certainly isn't underselling the agreement with Brussels, describing it as representing the "beginning of a moment of national renewal".

Members of the Conservatives' European Research Group , or ERG - which includes many prominent Brexiteers - have sounded positive about the deal, as outlined by the PM.

But some believe that the devil is in the detail.

ERG lawyers - including the veteran Eurosceptic MP Sir Bill Cash - are set to dissect the contents of the agreement between now and Parliament's recall on Wednesday.

But the former Brexit Secretary David Davis has said one day of scrutiny in Parliament isn't enough - and has accused the EU of having a habit of inserting "little quirks" into its treaties.

Meanwhile, writing in the Times, Cabinet Office Minister Michael Gove said the UK and EU would be able to enjoy a "special relationship" as a result of the new deal.

He said the deal would give UK businesses "certainty and the ability to plan for growth and investment".

"We can develop a new pattern of friendly co-operation with the EU, a special relationship if you will, between sovereign equals," he added.

But Scotland's First Minister Nicola Sturgeon accused the government of "selling out" Scottish fishing with the deal.

She tweeted: "The Tories have sold out Scottish fishing all over again.

Liberal Democrat leader Ed Davey told BBC Breakfast that the post-Brexit trade deal meant more of the red tape "we all feared", "far more bureaucracy" and was a "defeat for those who wanted frictionless trade".

He said the deal was "bad for business", "less safe" for families and it was therefore "insupportable".

Conservative MP and former cabinet minister Theresa Villiers, who voted for Brexit, told the same programme that "many prime ministers" had returned from negotiations with Brussels with deals that appear to "do the right thing and then closer scrutiny demonstrates that they are not as good as first billed".

"I hope that we have finally seen the pattern broken and I hope that this is a deal that I can support, but it is important that we scrutinise that detail carefully and take some expert advice on it," she said.

Meanwhile, the Department for Education has announced further details of the Turing scheme which will replace the Erasmus student exchange from September 2021.

It will provide funding for around 35,000 students in universities, colleges and schools in the UK to go on placements and exchanges overseas, stretching beyond Europe with £100m set aside for 2021/22, the DfE said.