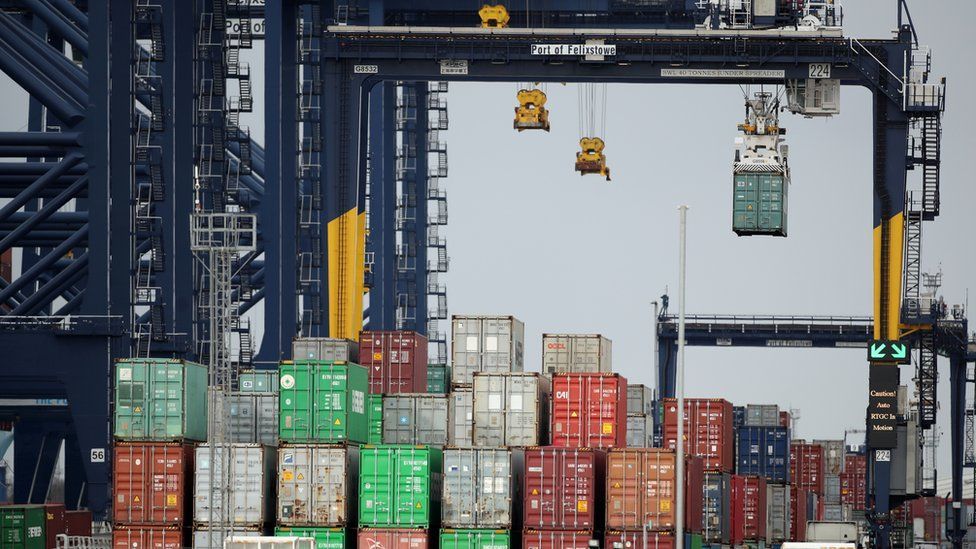 Brexit: Checks on goods imported from the EU delayed again

The UK is to delay introducing post-Brexit checks on food and farming imports to England, Scotland and Wales, blaming Covid disruption and pressure on global supply chains.

Measures which were expected to come in next month will now be introduced in January and July next year.

Labour said the government did not have a "sustainable answer to tackling delays and red tape at the border".

The move comes amid shortages of some products in shops and supermarkets.

Many large companies have blamed a lack of lorry drivers for the problems experienced, with M&S chairman Archie Norman, a former Conservative MP, predicting a "bumpy ride" for retailers in the run-up to Christmas.

The EU has implemented full checks on UK goods since the start of this year.

Checks on goods going the other way were also due to come into force in full after the post-Brexit transition ended in January.

But they were delayed and, in March, the government announced a timetable to get changes for the food and agriculture sectors done by 1 October.

"The government's own preparations, in terms of systems, infrastructure and resourcing, remain on track to meet that timetable," she said, in a written Commons statement.

"However, the pandemic has had longer-lasting impacts on businesses, both in the UK and in the European Union, than many observers expected in March.

"There are also pressures on global supply chains, caused by a wide range of factors including the pandemic and the increased costs of global freight transport."

Ms Mordaunt announced that the requirement to pre-notify British officials about agricultural and food imports from the EU would now start on 1 January next year, rather than on 1 October this year.

The requirement for EU firms to get export health certificates before sending live animals and animal products to Britain would be put back to 1 July, she said.

For Labour, shadow Cabinet Office minister Baroness Chapman said: "This announcement shows what we have all known for months - that the government do not have a workable, sustainable answer to tackling delays and red tape at the border...

"We cannot have another year of stop-gap solutions, meaningless deadlines, and threats of even greater disruption and economic damage."

The British Chambers of Commerce called the latest delays "sensible given the ongoing issues with ensuring trader readiness, the need to build more border control posts and the skills shortages crisis".

But the Food and Drink Federation criticised the government for "the lateness" of its announcement.

"Businesses have invested very significant time and money in preparing for the new import regime on 1 October 2021. Now, with just 17 days to go, the rug has been pulled," said chief executive Ian Wright.

"We welcome the government's acknowledgement that supply chains are under extreme pressure but this is to a large extent caused by labour and skills shortages in every part of the food chain," he added.