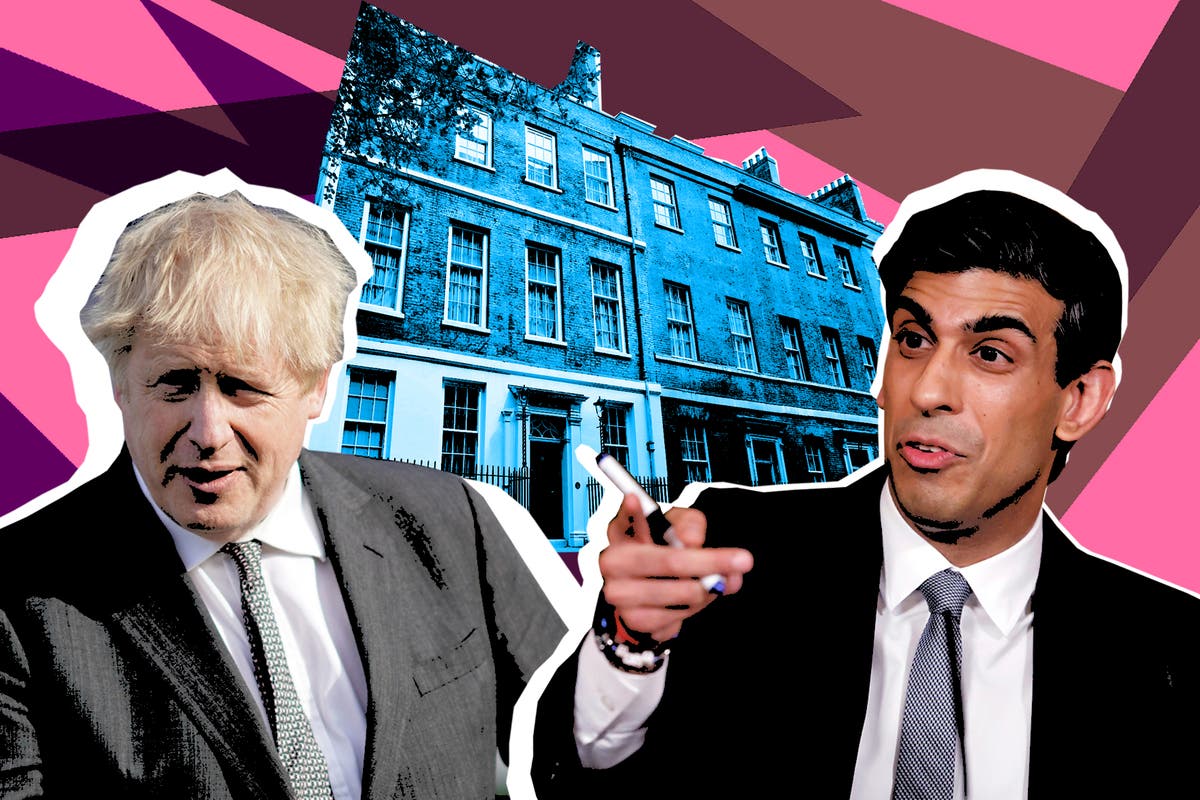 Rishi Sunak’s team has been quick to point out the Chancellor’s Number 10 flat makeover was paid for ‘entirely at this own expense’, but what does it look like and how does it compare to the PM’s expensive eco-chic refurb? Katie Strick goes through the keyhole

It was never going to take long. Now that Boris Johnson’s penchant for gold wallpaper is out in the open, details of rival Downing Street interiors are slowly emerging. Theresa May’s “John Lewis furniture nightmare” actually featured £195 Habitat coffee tables and Elemis scent diffusers. Samantha Cameron had a soft spot for raffia wall coverings. Gordon Brown and his wife, Sarah, didn’t spend a penny on upgrades. And the latest revelation: Rishi Sunak gave his Downing Street flat a makeover last year, too - but the refurb was paid for “upfront” and “entirely at his own expense”.

The Chancellor has been living in the flat above Number 10 with his wife Akshata Murty and their two daughters, Krishna and Anoushka, after Johnson and Symonds chose to follow recent PMs and live in the more spacious flat above Number 11, despite only having one child.

Sunak has long spoken of his love of designer spin bike Peloton but other details of his living situation remained behind closed doors - until this week. According to the Treasury, Sunak redecorated his Downing Street bolthole last year at his own expense, but hasn’t chosen to make any changes to his other ministerial property, Dorneywood in Buckinghamshire.

Friends say his style is unflashy while Johnson’s eco-designer prefers gold wall furnishings - so how does the Chancellor’s flat differ from his neighbour’s? And what do their design choices tell us about their leadership styles? From Sunak’s modest modern tastes to Johnson’s boho-chic look, this is what the PM and Chancellor’s Downing Street flats say about them.

Why does the Chancellor live at Number 10?

Traditionally, the prime minister lived at 10 Downing Street and the Chancellor next door at Number 11. But all of this changed when Tony Blair came into office in 1997. Blair had three children at the time whereas Brown, his Chancellor, had none, so they swapped and Blair lived with his wife and four children in the more spacious, family-friendly flat above Number 11.

Since then, the flat-switch has remained something of a tradition. Brown, Cameron and Theresa May all followed suit and lived at Number 11 when they became prime minister, and Sunak and his family moved into the smaller flat above Number 10 when he became Chancellor last year.

A statement from junior Treasury minister Kemi Badenoch yesterday confirmed that Sunak’s flat was redecorated last year, but paid for “entirely at his own expense”. No further details were given about Sunak and his wife’s makeover, but Westminster insiders say the flat is “much smaller” than Johnson’s at Number 11 and may only have two bedrooms, “which must make it a bit cramped given he has two kids” - especially during lockdown.


But the Chancellor has never been one for flashy displays of wealth. Reports suggest he has a net worth of around £200 million, while his wife Akshata Murty, daughter of Indian technology magnate Narayana Murty, was recently said to be richer than the Queen thanks to £430 million shares in her father’s firm. But despite their extensive wealth, Sunak has been described by friends as “modest and humble” with a source telling the Times “he’s certainly not flashy”.

Besides, he and Murty have plenty more properties to choose from if they and their daughters need some space for a weekend getaway. Their property portfolio is worth more than £10 million and includes a £7 million, five-bedroom mews house in Kensington, a Georgian mansion set in 12-acres in North Yorkshire, a first-floor flat on the Old Brompton Road in Fulham and an apartment in Santa Monica, not far from the Sussexes in California.

Both the Yorkshire mansion and Californian bolthole are listed under his wife’s name and the Fulham flat property is reportedly mostly used by their relatives on visits to London. Since Sunak entered office last year, the couple also have access to Dorneywood, the grace-and-favour house in Buckinghamshire made available to the Chancellor alongside Downing Street. Badenoch confirmed that no refurbishment had been requested of Dorneywood by Sunak and his wife.


The couple met at Stanford, with Tatler describing Murty as “an artistic and fashion-loving student with a deep passion for India’s traditional craftsmanship” - and that interest in authentic Indian practices clearly continues to this day. Her fashion label Akshata Designs is said to focus on discovering unknown Indian artists from remote villages and bringing their art to life. Profits from the fashion line are given to the artists as a way of giving back to the community and Akshata recently told Vogue India her garments are all about protecting a rich heritage.

That sense of authenticity and going back to one’s origins has seemingly fed into hers and her husband’s interiors style, too. Sunak told a Politico podcast last month he keeps a statue of Hindu god Ganesh on his desk at Number 11 and his constituency home has led to Sunak being dubbed the “maharajah of the Yorkshire Dales”, with its own ornamental lake and boating house.

Their five-bed Kensington home is believed to be rather more minimalist. A photograph of the £7 million house, located in a quiet Kensington mews, shows a modern cream sofa, brown leather footstool and light, airy furnishings, with cream lampshades and beige cushions and rugs. It also has access to a nearby private garden where the children can play.

As for Sunak’s off-time, it’s no secret the Chancellor likes his high-tech toys and big brands. His own branding and slogans look more like ads for tech start-ups than financial policy and this is reflected in his home furnishings. Photos on Sunak’s personal Instagram show him using an iPad and Ember smart mug at his desk and he’s spoken in the past of his passion for smart US spin bike brand Peloton, loved by the likes of Michelle Obama and countless A-list celebrities.


“I check my phone, do a news scan, then depending on how energetic I’m feeling I’ll either do treadmill, Peloton or some gym class. I do that, see my kids and then generally I’m at my desk at 7.45am,” he said of his morning routine at the Conservative Party conference last year. Sunak has not confirmed where he keeps the treadmill and Peloton bike but given his early starts they are unlikely to be far from his desk - does he go full Silicon Valley exec and work from the treadmill?

Several photos on Sunak’s grid also show him in a study, which is kitted out with a sleek glass-topped desk and a minimalist white bookcase - a nod to his modern leadership style and slick personal branding. Another taken a week after he became Chancellor in what could be his upstairs flat shows him holding a stainless steel teapot against a stripped-back grey kitchen as he holds up a packet of Yorkshire Tea. Even in his modern Downing Street pad, he clearly likes to stay true to his roots.

How does the flat differ from Johnson’s next door?

Despite only having the one child, Johnson and Symonds are speculated to have spent as much as £200,000 refurbishing the four-bedroom flat at Number 11 thanks to Symonds’s hiring of eco designer Lulu Lytle, whose designs mimic the boho glamour of Symonds’s beloved members’ club 5 Hertford Street, or Lulu’s, in Mayfair.


Friends have called Symonds’ taste “exquisite” and she has reportedly spent the last year hand-restoring vintage furniture to replace the dark wooden furniture that was there before - no sleek glass desks or Peloton bikes for the PM’s fiancee. Meanwhile the flooring in the very spacious hall has been stripped and polished and the living area, now often lit by candles, has been painted a deep green.

The woman behind the lavish year-long makeover, leading interior expert Lytle, is known for her love of Rattan and bold designs - a nod to Johnson’s unconventional looks and bold delivery style as leader. Rattan furniture, intricate textiles and marble bathrooms are among Lytle’s go-to looks, and her clients include interior designers, A-listers such as Mick Jagger and even royalty — Prince Charles took a tour of her famous Leicestershire rattan workshop last year and the Duke of Edinburgh was reportedly a client.

Symonds’s turn working with Lytle won’t have come cheap. Johnson reportedly told one minister that his fiancée had ordered “gold wall coverings” and a full refit by Lytle is rumoured to run into six figures, with pieces chosen for their striking looks — Soane’s new Cleveland chair, covered in, say, tangerine leather, would cost about £3,000 without VAT.


Soane fabrics start at £100 a metre, so if Symonds did opt for that, how much would it cost for her to dress the four-bed Georgian flat at Number 11? The exact square footage of No11 is unknown but given the average size of a UK four-bedroom residence is 140 square metres, wallpapering the flat with Lytle’s fabrics could cost upwards of £14,000 at a minimum.

Johnson has reportedly admitted in meetings that the sum for the whole refurbishment amounted to “tens and tens of thousands” and possibly as much as “over a hundred grand”, which is likely to be outside his budget given his pandemic pay-cut and expensive divorce from QC Marina Wheeler. No wonder Sunak - a careful budgeter - has opted for a rather different style.