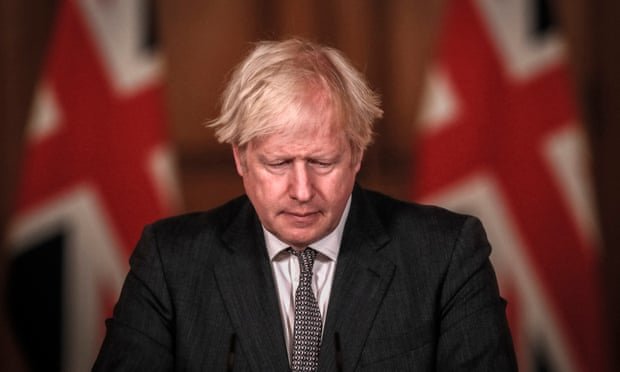 The poll predicts that if a general election were held tomorrow neither the Conservatives nor Labour would win an outright majority. Disturbingly for Boris Johnson, the survey says the Conservatives would lose 81 seats, wiping out the 80-seat majority they won in December 2019.

It gives the first detailed insight into the public’s perception of Johnson’s handling of the Brexit talks and the pandemic, amid fears that Britain is heading into a third national lockdown.

The prime minister is on course to lose his own seat of Uxbridge and Ruislip South, if the insight is accurate.

According to the survey of more than 22,000 people, conducted by the research data company Focaldata, using the multilevel regression and post-stratification (MRP) method that is said to be more than accurate than conventional polling, the results would leave the Tories with 284 seats and Labour with 282 – an increase of 82.

Results in Scotland would see the Scottish National party achieve a near complete sweep, winning 57 of the 59 Scottish seats. The poll also predicts the Liberal Democrats would be reduced to just two seats – in Bath and in Kingston and Surbiton – down from the current 11. One in four voters who supported the Lib Dems in 2019 said they will switch allegiance to Labour.

Many of the seats that Labour would gain are in the north of England, Midlands and Wales, part of the “red wall” collapse that swept the Tories to power at the last election, the Sunday Times reported.

The survey forecasts that the Conservatives would cling on to just eight of the 43 red wall seats that they won at the last election – Bassetlaw, Bishop Auckland, Colne Valley, Dudley North, Great Grimsby, Penistone and Stocksbridge, Scunthorpe, and Sedgefield.

The findings clearly suggest new Labour leader Sir Keir Starmer is making headway in rebuilding support for his party. In the last six months Labour has steadily hauled in the 26-point lead the Conservatives held.

The poll results are likely to foment further unrest among Tory MPs about the performance of the prime minister and his cabinet.

Justin Ibbett, founder of Focaldata, who carried out a similar poll for the Conservatives prior to the 2019 election, told the Sunday Times: “One year on from their stunning general election triumph, it is clear that the Conservatives already have a lot of work to do if they are to replicate their 2019 success in future elections.

“The SNP would appear to be the real winners. Not only do they win all but two Scottish constituencies, but the most likely outcome is a Labour-SNP coalition government, which would have an overall majority of just over 20 seats.”

Tory supporters were quick to point out on social media that the survey period ended before news of the Brexit deal was announced and claim there is evidence of a swingback to the Conservatives in the few days since.
#Boris Johnson  #Coronavirus  #Johnson  #Covid
Add Comment