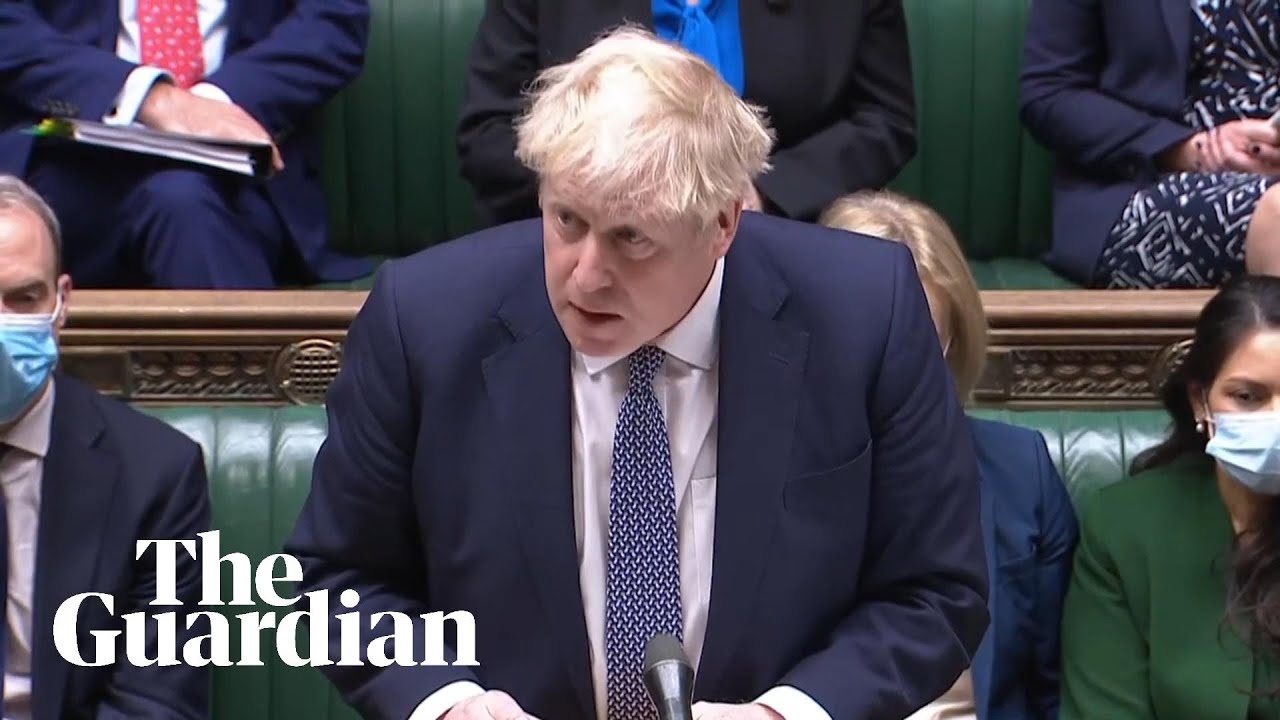 Boris Johnson’s premiership was hanging in the balance as Conservative MPs began openly calling for his resignation after he admitted attending a garden party in lockdown, claiming he thought it was a “work event”.

Johnson delivered a carefully worded apology for attending the alcohol-fuelled gathering of up to 40 officials in May 2020, which was described in an email invitation as “socially distanced drinks” to enjoy the warm weather.

Some cabinet ministers later tweeted their qualified support for the prime minister. The culture secretary, Nadine Dorries, said Johnson had been “right to personally apologise” because people were “hurt and angry at what happened”. She said it was now right to await the findings of senior civil servant Sue Gray’s inquiry into Downing Street gatherings. The findings could come as soon as the end of next week but more likely the week after, a cabinet source suggested.

One former minister was less convinced, saying Johnson “didn’t apologise for what he did but for things that may or may not have happened which he officially knows nothing about until Sue Gray tells him about it”.

Another MP said: “I’ve not seen such a half-arsed apology since my child apologised for spilling all the milk.”

There was silence for much of the day from the chancellor, Rishi Sunak, and the foreign secretary, Liz Truss, the two people tipped as most likely to succeed Johnson. Explaining that he had been “on a visit all day”, Sunak gave a lukewarm response on Twitter on Wednesday evening, saying Johnson was “right to apologise and I support his request for patience while Sue Gray carries out her enquiry”.

Just over an hour later, Truss tweeted that she stood behind Johnson “100%”, while foreign minister James Cleverly and Steve Barclay, the chancellor of the duchy of Lancaster, both lent their support.

After Johnson’s statement, one of the Conservatives’ most senior backbenchers, William Wragg, and Douglas Ross, the leader of the party in Scotland, publicly called for Johnson to resign, saying his position had become untenable.

Late on Wednesday night, former minister Caroline Nokes added her voice to those calling for the prime minister’s resignation. Speaking to ITV’s Peston, she said Johnson was in an “impossible position”, adding: “He either goes now, or he goes in three years’ time at a general election, and it’s up to the party to decide which way around that’s going to be. I know my thoughts are that he’s damaging us now.”

Some MPs were openly discussing sending letters to the chair of the backbench 1922 Committee, Graham Brady, demanding a vote of no confidence in Johnson. Brady will not reveal how many letters he has received until the threshold for the vote of 54 is reached, but one former minister suggested the number may be about 25.

MPs were also irritated by the prime minister appearing less contrite in private conversations after his Commons appearance than he had been in public. However, others suggested they would wait to see Gray’s findings. The aftermath of local elections in May was also suggested as a possible moment for a no-confidence vote to be triggered.

In the House of Commons, Johnson accepted for the first time that he had been at the 20 May 2020 gathering and that this was a mistake, while also attempting to defend his actions.

Saying the No 10 garden was at the time routinely used as “an extension of the office”, Johnson argued that he had believed the event was a work gathering, prompting derisive laughter from opposition MPs and mockery across social media. The event itself, he added, “could be said, technically, to fall within the guidance”.

In response, the Labour leader, Keir Starmer, called for Johnson to “do the decent thing and resign”, castigating the prime minister as “a man without shame” and someone the British public widely viewed as a liar.

Johnson’s performance brought muted cheers from Tory benches but any hopes inside No 10 that a reckoning had been successfully delayed until after Gray’s report were dashed when Ross became the first senior MP to call for the prime minister to resign.

The leader of the Scottish Tories said he had previously argued Johnson’s position would be untenable if it was found he had been at the party, and that this had happened.

Ross said: “I don’t want to be in this position, but … I don’t think he can continue as leader of the Conservatives.” He later confirmed that he had submitted a letter calling for a no-confidence vote.

The levelling-up secretary, Michael Gove, later ridiculed Ross’s stance, telling MPs at the powerful 1922 Committee that “my instant response is he’s in Elgin and the national Tory leader is in London”. Gove launched a staunch defence of Johnson, saying he had made the right decisions, including on Covid restrictions.

But Wragg, the vice-chair of the committee, said colleagues were “frankly worn out from defending what is invariably indefensible”.

“For their sakes at least, the prime minister should see that and do the right thing,” he told the BBC, saying the resignation should come soon.

The “constant distraction” of stories was damaging the government and party, Wragg said, adding: “As colleagues are saying to one another on and off the record, I sadly think that the prime minister’s position is untenable.”

One Tory adviser said they didn’t think “No 10 understands how much danger they are in” and predicted the prime minister had 72 hours to turn things around, with a lot of “noise” from furious MPs expected in the next couple of days.

“At the moment, it is clear they haven’t done enough to turn this around. He could do more with the apology and taking responsibility, more fulsomely,” they said, while also highlighting the need for an overhaul of the No 10 operation.

Downing Street has said it would expect Gray’s inquiry to be paused if the Metropolitan police decide to launch their own investigation into alleged breaches of coronavirus regulations. On Wednesday night, however, the Met seemed set to wait until Gray’s inquiry is complete before making a decision.