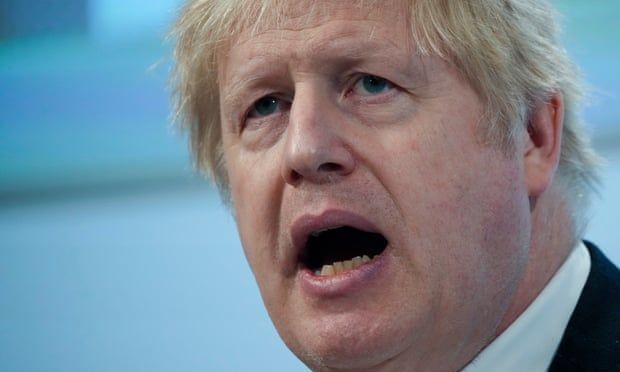 PM says he ‘can’t comment’ after returning questionnaire to Met police on alleged No 10 parties
Boris Johnson has repeatedly refused to say whether he would resign if fined by the police for breaking Covid laws at a series of alleged Downing Street parties.

After handing back a questionnaire to the Metropolitan police, which is expected to defend his presence at some of the dozen events under investigation, the prime minister dodged a series of questions about the issue.

Asked if he would quit if Scotland Yard issued him with a fixed penalty notice worth at least £100, Johnson told the BBC’s Sunday Morning programme: “I can’t comment about a process that is under way.”

He said he would have “something meaningful to say about this” when the Met investigation ended, but insisted that any answers now “would be interpreted as a point of commentary about the process”.

Johnson added he hoped people “won’t have long” but said: “There’s not a jot I can say until it’s done.”

Previously, the prime minister has commented on specific events – including a “bring your own booze” garden party to which more than 100 Downing Street staff were invited.

The gathering was held on 20 May 2020, when only two people from different households could meet outdoors socially distanced.

Last month, Johnson denied any wrongdoing and claimed “technically” no rules were broken and that he thought it was a “work event”.

However, he apologised for the “rage” people who had made “extraordinary sacrifices” during the pandemic felt because they felt “the rules were not being properly followed by the people who make the rules”.

Asked by the BBC if he understood why people found his defence of the event implausible, Johnson said: “There is literally not a bean I can tell you about that.”

About a dozen Conservative MPs have gone public with their concerns about Johnson’s conduct and the way in which he ran No 10 during the pandemic.

However, more have expressed concerns in private about his leadership, and others are waiting for the Met inquiry to conclude and the publication of the full Sue Gray report before putting in a letter calling for Johnson to quit.

Johnson declined to say whether he stood by his promise in the Commons that no Covid laws were broken in Downing Street.

And as to whether there was a party in his Downing Street flat during lockdown, he said: “Respectfully, humbly, I can’t say anything more about this until the process is completed.”

A staunch ally of Johnson’s, the Foreign Office minister James Cleverly, insisted: “I don’t think what the country needs right now is a vacuum at the centre of government.”

But David Lammy, Labour’s shadow justice secretary, responded in a tweet: “I totally agree – this is exactly why Boris Johnson should resign.”

The Met has not said how much longer its investigation – known as Operation Hillman – will take. Officers have started receiving back questionnaires sent to those – including Johnson – who it believed attended some of the dozen gatherings being investigated.

Ed Davey, leader of the Liberal Democrats, said Johnson was “not fit to be prime minister”, and added: “If he won’t resign, Conservative MPs should do the right thing and sack him.”
#Boris Johnson  #Johnson  #Covid
Add Comment