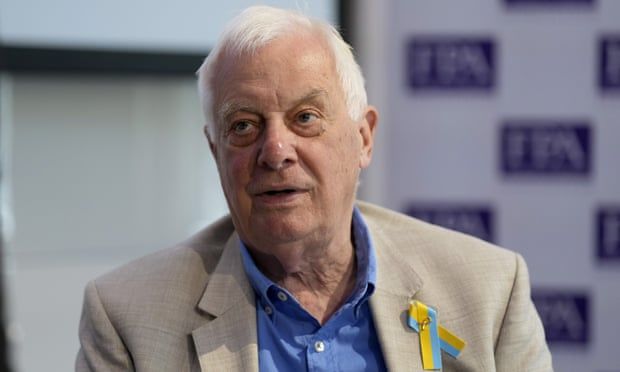 Chris Patten said that if the prime minister remained in post, it would “hasten the breakup” of the United Kingdom and result in Scotland being more likely to pursue independence.

Patten condemned the “seediness and mendacity of this government”, adding that because Labour was still hindered by “fundamental weaknesses”, many people had been “left with an aspiration for a decent, competent, generous-spirited, sensible political force in the middle, which nobody at present is providing”.

After Johnson survived a confidence vote but was opposed by 41% of his own MPs in a private ballot, Patten said it had shown “a terrible weakness of my party”.

Speaking to LBC radio, he said it was “really sad that the Conservative party is split between Brexit rightwing Conservatives and others” and that Johnson’s every move seemed to be determined by his motivation to appease the former group.

“Because I don’t think we have a Conservative party at the moment, we have an English nationalist government, with all the consequences and one which you can’t trust.”

Patten said of his preferred outcome at the next general election: “I would prefer to see probably a coalition which held the union together, because I think that’s really in threat. [If] you want to break up the union, you send Boris Johnson up to Scotland.”

Pointing to the government’s approach to the BBC, Patten said that ministers were threatening the broadcaster and “trying to box the BBC into giving special favours, in the way the news is treated, to the government”.

He added: “We should have nothing to do with it and we should make a real fuss about it. And it is the sort of issue that would make old-fashioned Tories like me want to throw up and want to see the end of this government.”

Patten, who is a Conservative peer and served as party chair during part of John Major’s administration, also said Brexiters had tried to distance themselves from the consequences of the UK’s departure from the EU.

He lamented the role played by Jacob Rees-Mogg, who is the Brexit opportunities minister.

Though Johnson’s standing was severely wounded after the confidence vote earlier this month, he has vowed to fight on and lead the Conservatives into the next election.

He is now immune to another vote of no confidence for 12 months – though Tory MPs in charge of setting the rules who sit on the 1922 Committee may consider shortening the period to as little as six months, meaning another vote could be held around Christmas.
#Boris Johnson  #Johnson
Add Comment