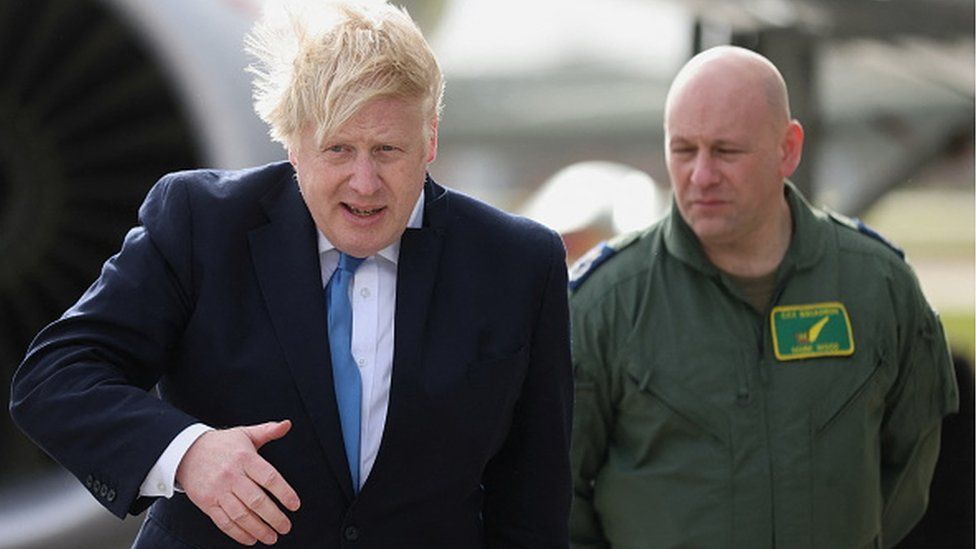 Boris Johnson has until 22:00 GMT on Friday to answer a questionnaire from the Metropolitan Police about his participation in No 10 parties when Covid restrictions were in force.

The prime minister was one of more than 50 people sent the document by officers looking at potential lockdown breaches.

Lawyers have been advising Mr Johnson about his response.

The BBC understands Downing Street is not currently planning to confirm when the PM has submitted his survey.

Mr Johnson has previously said he did not believe he had broken any lockdown rules, but apologised "for the things we simply didn't get right".

The Met investigation into 12 events held across government was launched in late January, after an internal inquiry led by civil servant Sue Gray passed information to the force.

She did not publish her full report due to the police investigation, but in her initial findings, Ms Gray criticised "failures of leadership" in No 10.

The police said a fine would be issued to anyone found to have breached Covid regulations, though a decision is not expected for weeks.

In a letter sent on Thursday, Ms Gray said she would allow staff being questioned by police to view notes on the evidence they gave to her inquiry.

But the BBC understands those staff will only have access to notes on their interviews, so they cannot see what others have said about the gatherings.

For months, the PM has been dogged by reports of staff parties in Downing Street during lockdown.

Several Conservative MPs have called for Mr Johnson to resign over the row, but others have said they would withhold their judgement until the police investigation had concluded.

Last week, the Met said it would contact people "believed to have taken part in the events in question to get their accounts".

The force said it would send questionnaires that have "formal legal status and must be answered truthfully", and that needed to be responded to within seven days.

Mr Johnson received his questionnaire last Friday, but Downing Street has since said his answers would not be made public.

How PM hopes to get off the hook

The prime minister has made it clear what his defence will be.

Boris Johnson's allies don't know for sure whether his explanation will work, but here's how they think it might...

Firstly, there have not been many retrospective prosecutions for breaking lockdown laws.

Secondly, the prime minister has argued both publicly and privately that the events he was at can be reasonably seen as work.

If he makes that case, will the Met have enough evidence to conclude he is wrong? The bar, some believe, is likely to be high.

Mr Johnson hopes that will be enough to get him off the hook.

If it doesn't, there could be a new wave of political crises for the prime minister and more Conservative MPs could try to force him out.

The PM has declined to answer questions on the subject throughout the week.

He told reporters in Scotland: "All that process has got to be completed before I can say anything more, but I look forward to telling you a lot more in due course."

Of the dates being investigated by the police, Mr Johnson is known to have been present at three gatherings, including a "bring your own booze" garden event on 20 May 2020.

Mr Johnson's wife, Carrie Johnson, was expected to be among those sent a questionnaire, but it has not been confirmed.

It is understood that Chancellor Rishi Sunak, who lives in Downing Street in a separate flat to Mr Johnson, has not received a similar questionnaire yet.

While the PM has said he would tell the public if he received a fixed penalty notice, police are unlikely to identify anyone else if they have been fined.

When Parliament reconvenes next week, the Liberal Democrats are planning an attempt to force the government to reveal whether ministers and senior officials had been fined.

The party has tabled a "humble address" motion which, if passed, would require Ms Gray's report to be published in full, alongside all evidence - including photographs.

Detectives investigating the parties have been handed more than 500 documents and 300 images gathered as part of Ms Gray's inquiry.

Watch: What has the PM said before about alleged No 10 parties?
#Boris Johnson  #Johnson  #Covid
Add Comment