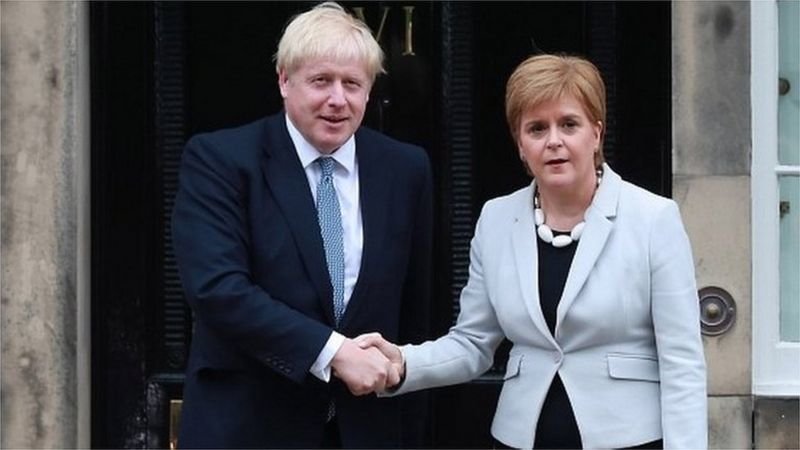 Boris Johnson described devolution in Scotland a "disaster" during a meeting with Conservative MPs, one of those taking part has told the BBC.
Mr Johnson also reportedly described it as predecessor Tony Blair's "biggest mistake".

But government sources suggested the prime minister had been making "more of a reference" to the SNP's running of Scotland than devolution in general.

Mr Johnson was in a Zoom meeting with Tory MPs representing dozens of seats in northern England on Monday when he is said to have made the remarks.

The Sun newspaper reported the PM had told the MPs "devolution has been a disaster north of the border".

Mr Blair's Labour government brought in devolution for Scotland in 1999, including the setting up of a parliament in Edinburgh.

A Downing Street source: "The PM has always supported devolution, but Tony Blair failed to foresee the rise of separatists in Scotland."Devolution is great - but not when it's used by separatists and nationalists to break up the UK."

Elections for the Scottish Parliament take place next May.

Ms Sturgeon's SNP says a second referendum on independence - following Scotland's vote against it in 2014 - should happen if her party wins. But Mr Johnson has ruled this out.

In response Mr Johnson's reported remarks to Tory MPs, Scotland's First Minister Nicola Sturgeon tweeted: "Worth bookmarking these PM comments for the next time Tories say they're not a threat to the powers of the Scottish Parliament - or, even more incredibly, that they support devolving more powers."

She added that the "only way to protect and strengthen" the Scottish Parliament was through independence for Scotland.

But the leader of the Scottish Conservatives, Douglas Ross, tweeted: "Devolution has not been a disaster. The SNP's non-stop obsession with another referendum - above jobs, schools and everything else - has been a disaster."

It has been suggested by some taking part in the MPs' Zoom meeting that Mr Johnson was answering a question that had been put to him about devolution in England.
#Boris Johnson  #Johnson
Add Comment