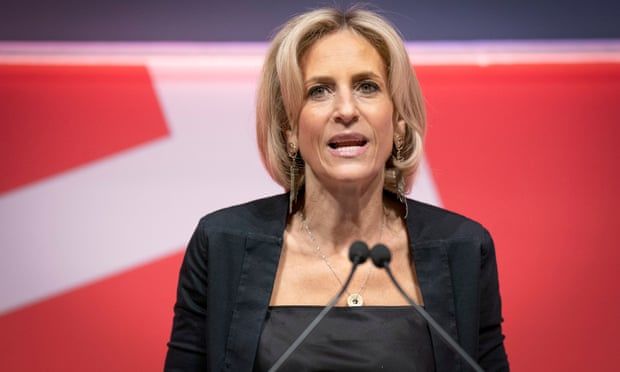 Broadcaster denies any pressure from No 10 to apologise for presenter’s criticism of Dominic Cummings
A BBC executive has said “in no way” did the government prompt the broadcaster to censure Emily Maitlis.

Maitlis claimed the BBC went out of its way to “pacify” Downing Street when she said it was clear Dominic Cummings had breached lockdown rules in 2020. The presenter said BBC bosses were initially happy with her broadcast, only to change direction and issue a swift apology when No 10 accused her of bias.

The ex-Newsnight host told the Edinburgh TV festival: “Why had the BBC immediately and publicly sought to confirm the government spokesman’s opinion? Without any kind of due process? It makes no sense for an organisation that is admirably, famously rigorous about procedure – unless it was perhaps sending a message of reassurance directly to the government itself?”

Speaking at the same event on Thursday, the BBC’s chief content officer, Charlotte Moore, pushed back and said due impartiality is “particularly important for the BBC”.

She insisted the BBC was not reacting to a call from Downing Street when it issued an apology for Maitlis’s comments: “In no way was there any influence from the government or from the board … Due process was followed and the BBC decided there was a breach of editorial standards. We hold everyone to account on editorial standards.”

Maitlis, who left the broadcaster this year to launch a forthcoming news podcast, used the annual MacTaggart lecture to argue the BBC and other broadcasters can be guilty of “both sides-ism” and seeking false balance in debates.

Moore said BBC viewers “expect our journalists to leave their personal agenda at the door – we’re not here to campaign” and it is important for the BBC to show “due impartiality on every subject”.

She also backed a series of impartiality reviews that are looking at all aspects of the BBC’s output for potential bias, saying it is “right we should constantly review and check ourselves”.

A BBC spokesperson said: “As we have made clear previously, in relation to Newsnight we did not take action as a result of any pressure from No 10 or government and to suggest otherwise is wrong. The BBC found the programme breached its editorial standards and that decision still stands.”

Moore, who oversees the vast majority of the BBC’s non-news output, said funding cuts caused by the licence fee freeze are forcing her to concentrate on making fewer “high-impact” shows.

She also suggested that the departure of many longstanding BBC staff, ranging from off-air employees to stars such as Maitlis, allows the BBC to promote new talent: “We will continually evolve and adapt and continually bring new people on.”

She said the turnover of staff makes it easier to offer career opportunities to younger staff and “have a diverse and inclusive culture”.
Add Comment