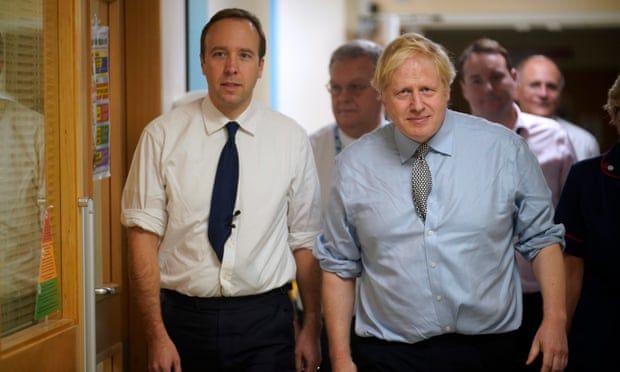 Two bereaved women whose fathers died from Covid in care homes that received infected NHS patients in April and May 2020 asked the high court to force disclosure of the texts, as well as emails sent from a private account by the then health secretary, Matt Hancock.

But Mrs Justice Eady ruled the government did not need to provide them in evidence for a judicial review of the legality of the government’s care home policy.

Discharging hospital patients into care homes without testing caused “thousands, if not tens of thousands of unnecessary deaths”, the bereaved argued.

Dr Cathy Gardner, one of the women who claim the care homes policy breached human rights laws and discriminated against the elderly and disabled, described the decision to block the release of potentially “highly significant” informal communications as “very disappointing”. They are considering an appeal.

Dominic Cummings, the PM’s former aide, has already published excerpts from WhatsApp messages with the PM about Hancock, including one where Johnson described Hancock’s testing strategy as “totally fucking hopeless”.

Lawyers for Gardner and her fellow claimant, Faye Harris, claimed crucial advice “was given via informal channels, text messages, WhatsApps, personal emails”. Without its disclosure the truth about what the government knew about the risks of discharging would remain hidden, they said.

Government lawyers argued that demands for extensive disclosure amounted to an attempt to conduct a public inquiry through the courts.

Sir James Eadie QC described the informal messages as “chit chat” and said they were “unlikely [to] contain materials of relevance”.

The court also ruled that the government did not need to release records of a meeting between the prime minister and Hancock at which, Cummings told MPs in May, the health secretary promised patients would be tested before being discharged into homes. Hancock subsequently denied that, saying he pledged instead to increase testing capacity.

The bereaved also wanted to see advice from England’s chief medical officer, Chris Whitty, and the chief scientific adviser, Sir Patrick Vallance, to ministers about protecting care homes, plus evidence of what was known about the risk of asymptomatic transmission and the limits on testing capacity.

The ruling comes amid rising pressure on the UK government to announce the terms of reference for the public inquiry, after the Scottish government said on Tuesday its would be established by the end of the year.

The Covid-19 Bereaved Families for Justice group, which represents more than 4,000 bereaved families, is separately seeking Hancock’s private emails under the Freedom of Information Act and a response to its request is weeks overdue. On Thursday the group marked a year of waiting since Johnson said he would meet the families.

A government spokesperson said: “As the prime minister said, we have committed to holding a full public inquiry which will start in the spring. Terms of reference will be set out in good time for the inquiry to begin, and we will consult with bereaved families and others before they are finalised.”
#Boris Johnson  #COVID-19  #Johnson  #Covid
Add Comment