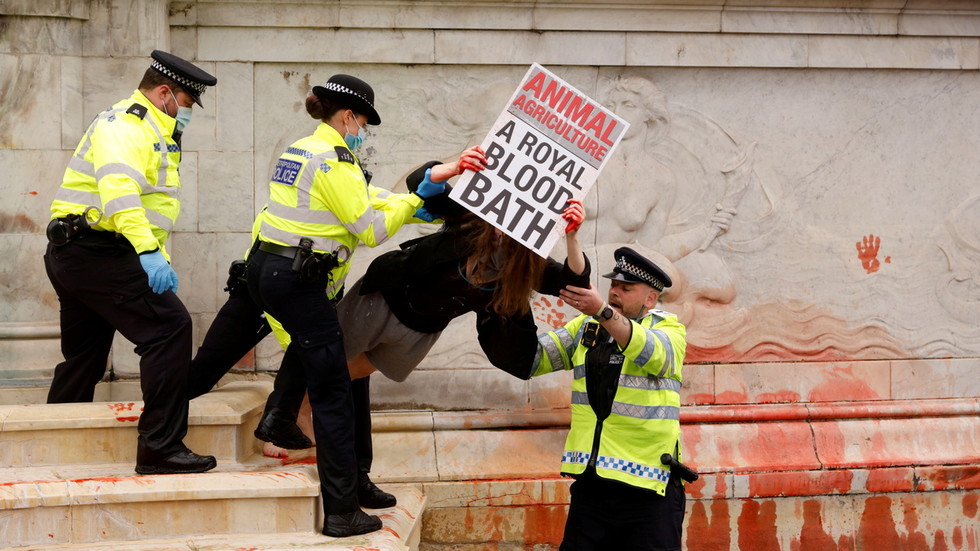 Several people have been arrested after Animal Rebellion activists dashed red paint on a monument to Queen Victoria outside London’s Buckingham Palace to protest crown estates “contributing to the death of animals.”

On Thursday, Animal Rebellion activists covered the fountains of the Victoria Memorial outside Buckingham Palace with red dye to symbolise what it said were the royal family’s crimes against animals and the planet.

The Met Police said they were on the scene and had made several arrests after the iconic London site was ​​”vandalised.”

In videos shared online, police can be seen attempting to scale the monument to catch some of the protesters. A number of those demonstrating carried placards reading “Hunting, a royal bloodbath.” The activists were originally assumed to be part of the Extinction Rebellion group, which is currently staging protests around the city to highlight environmental issues.

In a statement, Animal Rebellion said it dyed the monument, incorrectly described as the “Buckingham Palace fountains,” blood red to highlight the use of crown lands for hunting and animal agriculture.

“The crown estate is the biggest landowner in the UK and they choose to use this land for animal agriculture and hunting, which not only decimate our environment but cause the deaths of millions of lives every year,” the group wrote, adding that the royal family should be leading the way in a more just approach.

The statement also claimed that the land should be used to provide “healthy, nutritious food for all,” while being a space for animals to live.

The group said its action is in response to a Guardian report which claimed the Queen’s lawyer secretly petitions Scottish ministers to make the crown estates exempt from carbon-cutting initiatives.

Animal Rebellion’s demonstration comes amid a fortnight of planned action in London by climate protest group Extinction Rebellion. Thousands of police have been brought in to oversee the protests.