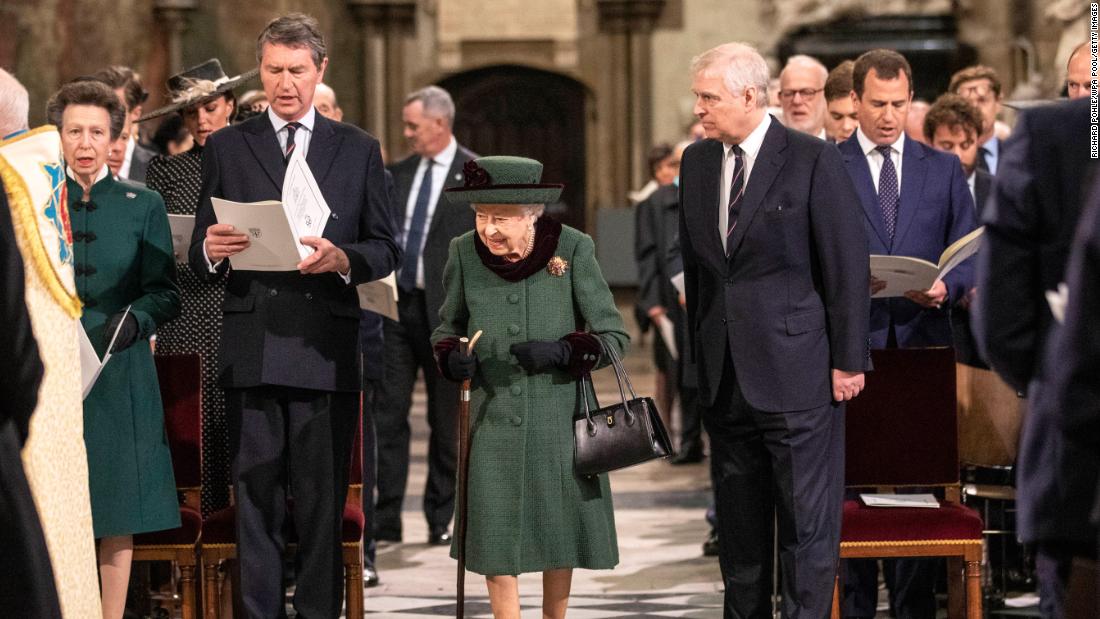 When Queen Elizabeth II sets her mind to something, there really is very little that can stop her.

Case in point: Her sheer determination to be at Tuesday's memorial service celebrating the life of her beloved husband of 73 years, Prince Philip.

The decision about whether the monarch would attend truly came down to the wire. As she rallied from her recent health problems, confirmation she would be there came mere hours before she made her first major public event outside of a royal residence in almost six months.

The royal family -- many wearing the meaningful shade of deep "Edinburgh Green" -- descended upon Westminster Abbey for the first time in two years. They were joined by a congregation in its hundreds, in stark contrast to the duke's funeral last year, held amid pandemic restrictions. 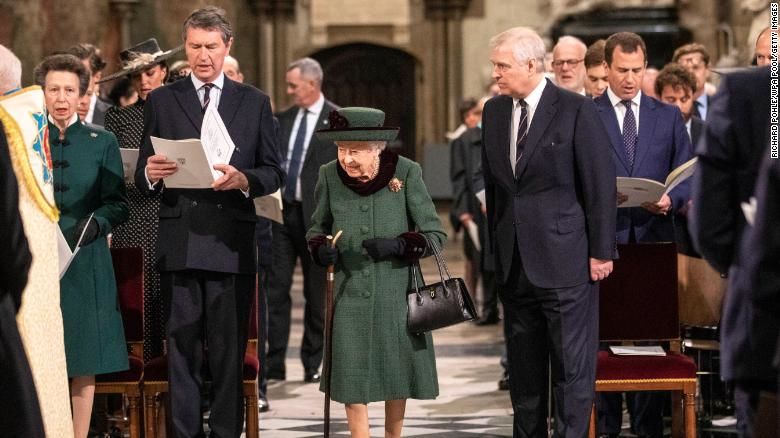 The Queen arrives in Westminster Abbey, London, accompanied by Prince Andrew, on March 29, 2022.

Attended by close family, friends and representatives of Philip's many patronages and charities, as well as government and commonwealth officials, the service featured heartwarming tributes to the Queen's "constant strength and guide" and uplifting musical selections (with the sovereign standing for each one, despite her mobility struggles).

Let's start by addressing the elephant in the room. The monarch arrived last, as is protocol, arm in arm with none other than Prince Andrew. The move stunned many, after the Duke of York was all but banished from royal service over his ties to convicted pedophile Jeffrey Epstein and his legal battle with one of Epstein's sexual trafficking survivors, Virginia Giuffre. 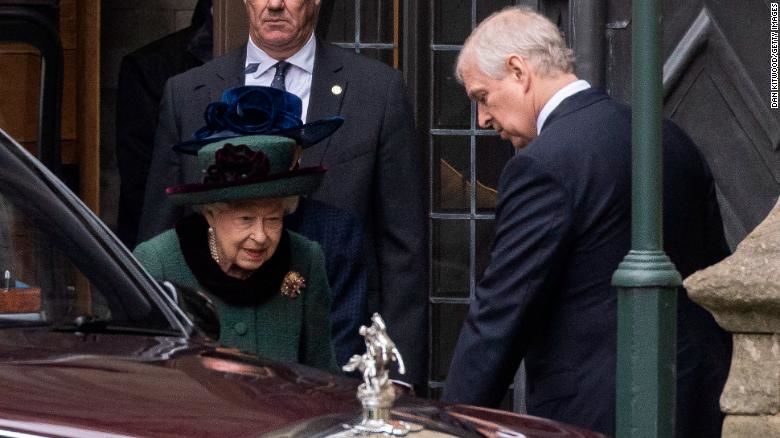 The monarch and her third child traveled to and from the event together.

You'll remember that when the royal was stripped of his HRH title, Buckingham Palace said: "The Duke of York will continue not to undertake any public duties and is defending this case as a private citizen."

Andrew's prominence at his father's service led some to ask if the choice of escort was an endorsement from the monarch and was perhaps laying the groundwork for a return for the disgraced royal.

Was it an unconventional selection? Maybe. But it was the Queen's to make. It's worth remembering that the two live close together in Windsor and it would have made practical sense for them to travel to and from central London together. The other point is that despite all the pageantry that comes with a Westminster service, it was still fundamentally a family event. 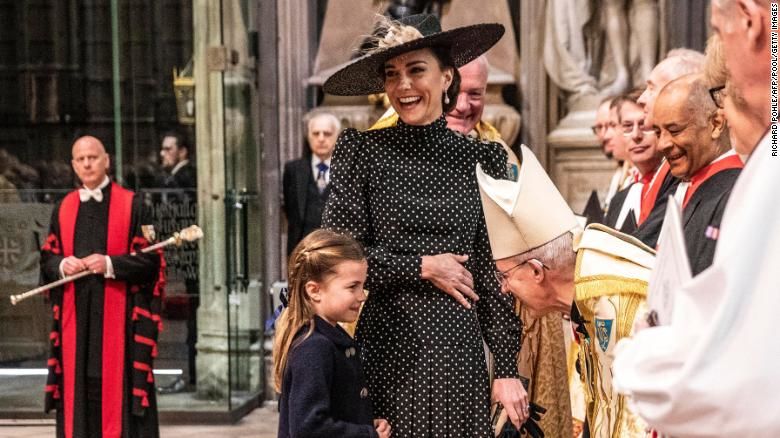 The Duchess of Cambridge reacts as she introduces her daughter, Princess Charlotte, to the Archbishop of Canterbury ahead of the service.

Some will question whether such a central role was appropriate. Regardless, Andrew is still the Queen's son -- and, some say, favorite child -- and whether the public likes it or not, he'll always be afforded access to occasions like these. While a reappearance on the royal frontline seems unlikely, Andrew remains in the wings and will probably turn up at Jubilee celebrations in a couple of months' time.

Less controversially, the more personal family outing was showcased by the rare public appearance of many of Philip's great-grandchildren. Two of the Cambridges' children, Prince George and Princess Charlotte, turned out for their first major church engagement.

Looking a little nervous, the two youngsters, flanked by their parents, shook hands with members of the clergy before finding their places near the front of the congregation. It may have seemed insignificant, but it signaled the start of a lifetime of photo moments and showed George, at just 8 years old, taking on a more formal role. 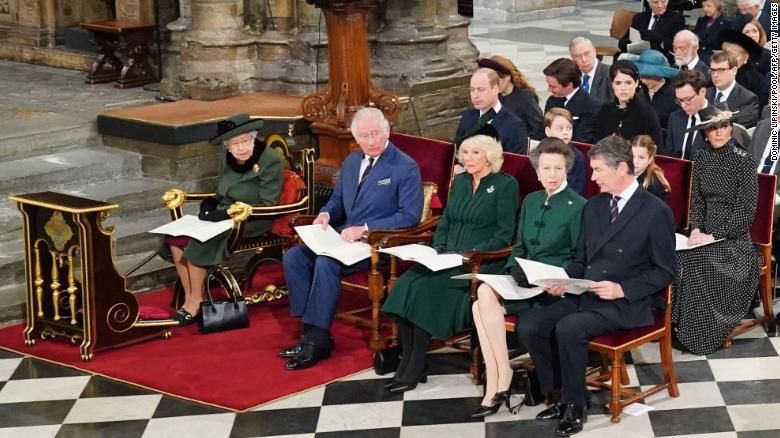 The Queen was surrounded by her family.

While it was nearly a full royal turnout, there was one glaring absence -- that of Prince Harry, who opted to remain in California. A reason wasn't given for his no-show, raising questions about whether he'll make the trip over for the Queen's milestone celebrations. However, Harry's spokesperson told us last month that he hoped to see his grandmother soon.

And that's where attention will now turn -- to the nationwide party set for the first weekend in June. After all the personal tragedy and family drama seen in the past 12 months, the hope is that the four-day spectacle will be a more positive turning point. While organizers will be going to extraordinary lengths to ensure the Queen's comfort across the busy weekend, questions persist over when and how she'll join the revelry.

WHAT ELSE IS HAPPENING?

The Queen carried out a series of in-person private investitures at Windsor Castle on Wednesday, a day after appearing at Philip's Westminster Abbey memorial service. She presented honors to several of her late husband's dedicated staff, according to the Court Circular, the official record of daily royal engagements. Brigadier Archie Miller-Bakewell, who served as the duke's private secretary, was invested with the insignia of a Commander of the Royal Victorian Order. The face-to-face honors with the monarch, which are becoming increasingly rare, also saw the duke's assistant private secretary Rachel Loryman, his archivist and librarian Alexandra McCreery and his correspondence secretary Suzy Lethbridge all made Lieutenants of the Royal Victorian Order, Britain's PA Media news agency reported. Finally, two of Philip's valets, David Berwick and Stephen Niedojadlo, were made Members of the Royal Victorian Order. These honors are conferred at the Queen's discretion and recognize personal service to the monarch.

The Cambridges have announced that BAFTA CEO Amanda Berry will head up their charitable foundation from June. Berry has served as the British arts charity's chief executive for the past 23 years. The couple said in a Kensington Palace press release that they were "very much looking forward" to working with Berry, adding that "her extensive experience will be of tremendous value as we continue our ambitious charitable work." In the same statement, Berry shared her excitement at the new role, saying: "I have witnessed, and am so impressed by, the unique impact The Royal Foundation can make on the issues
Their Royal Highnesses support, from mental health to conservation, and raising awareness of the importance of early years." 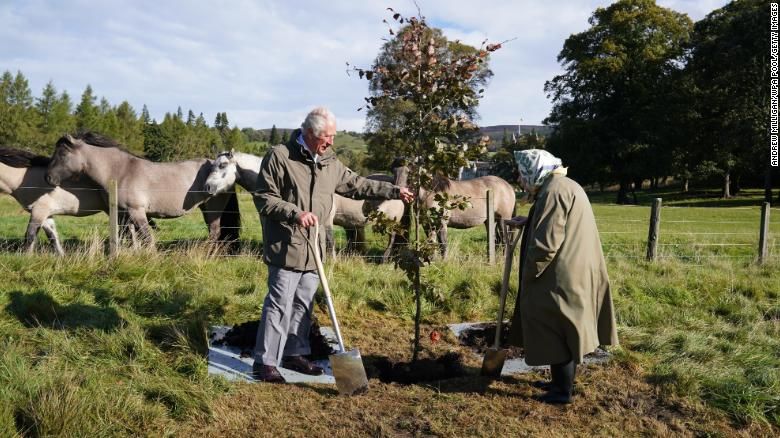 The Queen and Prince Charles planted a tree at the Balmoral Cricket Pavilion near Crathie, Scotland to kick off her special tree-planting initiative last fall.

More than a million trees planted for the Queen.

The Queen says she has been "deeply touched" by efforts across the UK after communities, schools and families came together to participate in her Green Canopy project. Over a million trees have been planted in the monarch's name to celebrate her 70th year on the throne and create a permanent legacy. The Queen said Thursday that "as the planting season draws to a close" she was sending her "sincere thanks." She added her hope that the new trees "flourish and grow for many years to come, for future generations to enjoy." Her message came at the mid-point of the initiative, which covers two official tree-planting seasons, which run October through March.

PHOTO OF THE WEEK 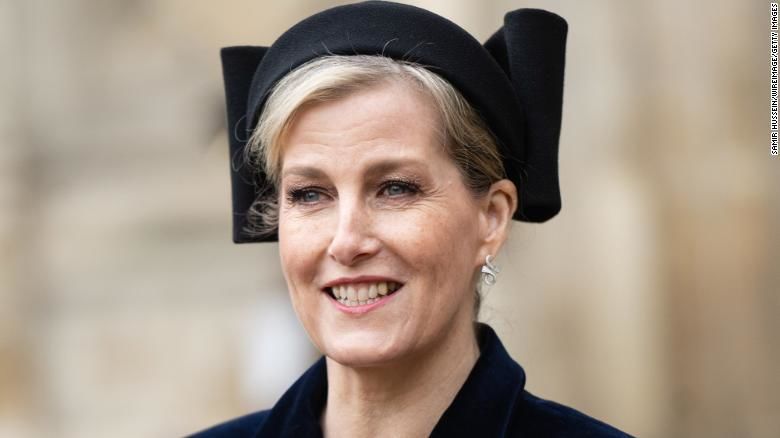 Sophie, Countess of Wessex is seen attending the memorial service for the Duke of Edinburgh on Tuesday. A day later, she was announced as the new Colonel-in-Chief of the Royal Electrical and Mechanical Engineers (REME) -- a role formerly held by Prince Philip for more than 50 years.

FROM THE ROYAL VAULT

The countdown is on. We're now less than 70 days away from the Queen's Platinum Jubilee celebration weekend.

As a warm-up for the main event, the royal family has created the #70for70 series on its flagship social accounts -- and will be posting a daily photo until the June Bank Holiday weekend to reflect each year that the Queen has occupied the British throne. The caption on each photo also highlights a moment in world history from the same year.

To kick things off, the first snap from their archives was the Queen's very first official photograph, taken in 1952, along with the factoid that in the same year, tea rationing finally came to an end in the UK -- seven years after the end of WWII (though other items continued to be rationed until 1954).

"Catherine and I are committed to service. For us that's not telling people what to do. It is about serving and supporting them in whatever way they think best, by using the platform we are lucky to have."

Looks like the Duke of Cambridge may be doing away with the "don't complain, don't explain" mantra. He took a head-on approach following the calamitous royal tour in the Caribbean with a rather unexpected move: By responding directly to the criticism.

In a candid statement released through Kensington Palace, the prince said the tour had "brought into even sharper focus questions about the past and the future" and that any future relationship between countries in the Caribbean and the UK was "for the people to decide."