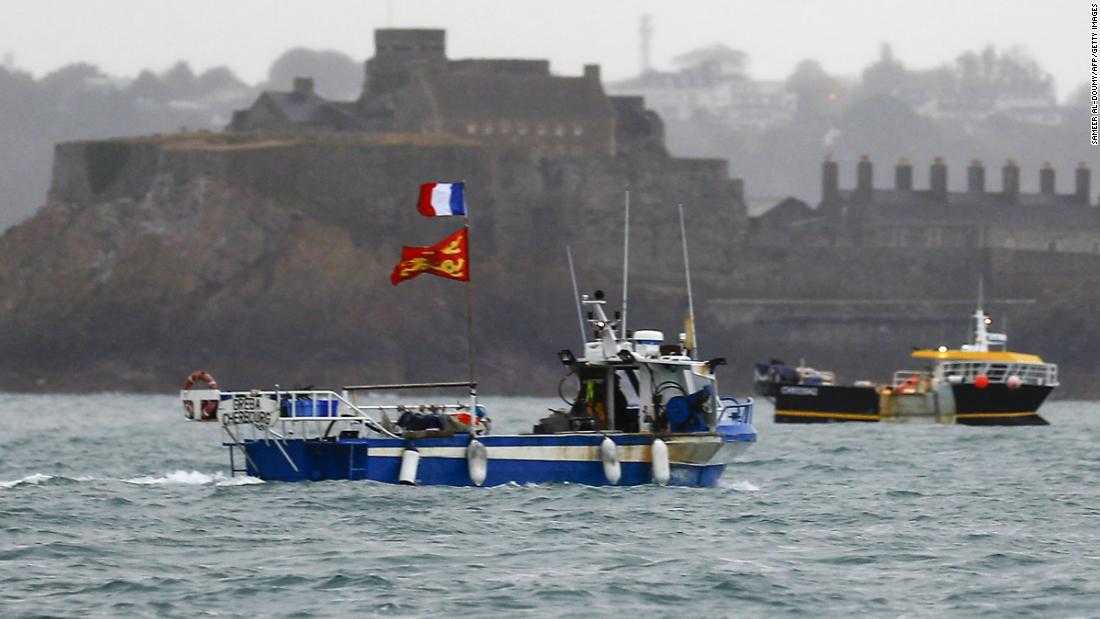 Analysis: Four months into Brexit, the UK and France have resorted to gunboat diplomacy over fish

Take a glance at the British media and you'd be forgiven for thinking that the UK was preparing for war with France.

On Wednesday night, it was widely reported that the UK was to send two gunboats to the self-governing British island of Jersey, which sits just 14 miles off the French coast. On Thursday, France announced that it was sending its own navy ships to monitor the situation.

The British warships were deployed in response to a protest by French fisherman at the port of Saint Helier, Jersey's capital, over post-Brexit rules on fishing rights. In short, France is angry that after decades of unfettered access to the waters around Jersey, fishing boats must now provide proof they have historically fished in the waters, and paperwork that is required since Britain left the European Union.

By mid-afternoon, the French fishing boats were reported to be leaving the port, ending the protest. The UK government later said one of its Royal Navy patrol vessels was returning to port as the situation in Jersey was "resolved for now."

"We are pleased that French fishing boats have now left the vicinity of Jersey. Given the situation is resolved for now, the Royal Navy Offshore Patrol Vessels will prepare to return to port in the UK. We remain on standby to provide any further assistance Jersey requests," a government spokesperson said in a statement.

While both sides in this dispute had tried to talk down the drama, claiming that the French boats would not actually block the port, and UK government officials were adamant that they didn't want the situation to escalate, the word "war" was hard to avoid when looking at the headlines.

Almost all of the British press carried the story, leading on gunboats. The Times newspaper carried a quote from David Sellam, head of France's joint Normandy-Brittany sea authority, saying "we're ready for war ... we can bring Jersey to its knees." The Sun, Britain's most popular newspaper, published the views of a British fisherman, who said blocking the port would be an "act of war." 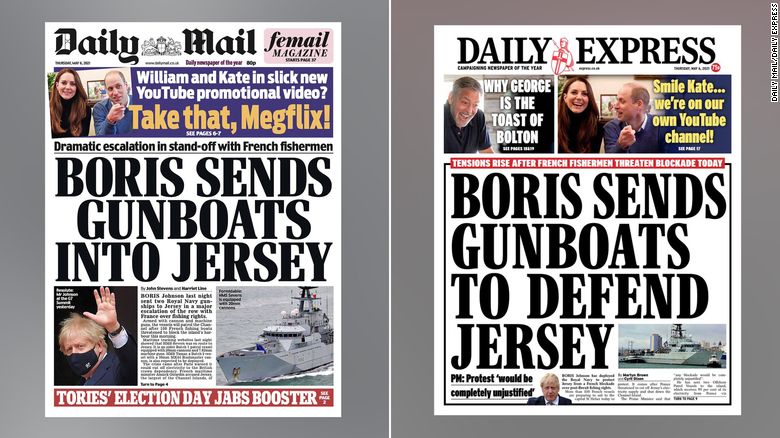 The Jersey fishing dispute features on the front pages of the Daily Mail and the Daily Express on Thursday, May 6.

For all the finger-pointing, the blame most likely lies with both the UK and EU's decision to reach a last-minute trade deal at the end of December, just days before it was implemented, having kept the details of negotiations secret for months. "When you reach a deal at the 11th hour and don't adequately tell the affected parties what it means for them, issues like this are inevitable," says Anand Menon, professor of European politics at King's College London.

On the surface, the UK's decision to send gunboats did appear to be a dramatic escalation, especially after Dimitri Rogoff, head of fisheries for the French region of Normandy, told CNN the French fishing boats would not create a blockade, just a protest. He added that Thursday's action will "signal" the French "frustration with the licenses but it is not an act of war." 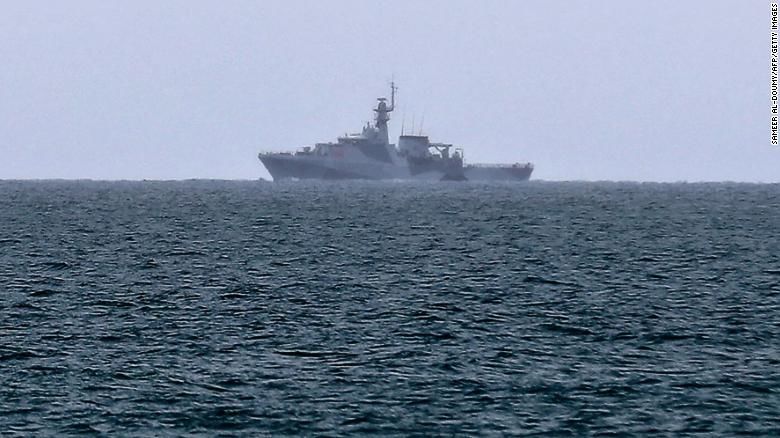 A British Royal Navy vessel patrols the waters off Jersey on May 6 to monitor the protest by French fishermen. 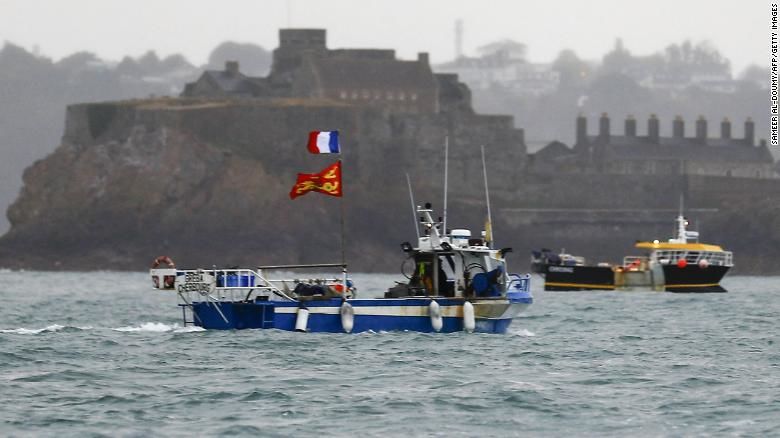 French boats protest about fishing rights in front of the port of Saint Helier on Thursday May 6.

Downing Street has kept its official responses measured, with a senior government official keen to stress on Thursday morning that despite the presence of Royal Navy ships, the French boats were not blockading.

So, why send the boats? A UK government minister admitted that while they really do hope the navy ships "nip this in the bud," it was also "impossible to ignore on the record threats from the French government to cut off electricity to Jersey." Which, yes, really did happen, and is very serious, given 95% of Jersey's electricity comes via underwater cables from France. 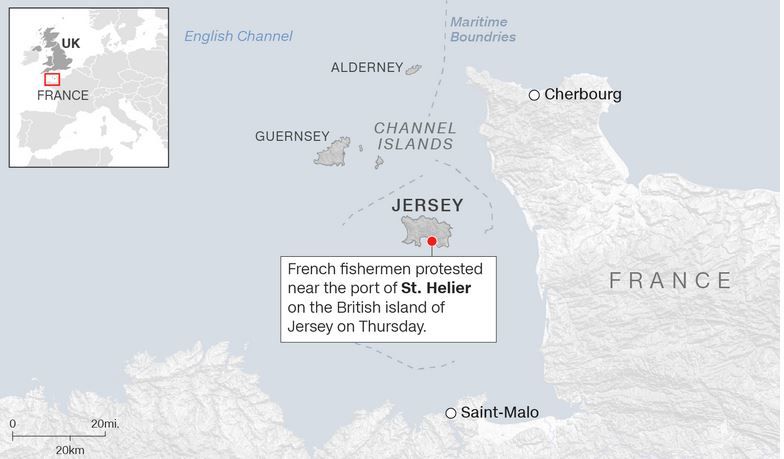 Sadly, history shows that spats over fishing between France and Britain have a habit of getting out of control. It was only in 2018 where scallop catchers were throwing rocks and smoke bombs at one another. And while "scallop wars" and gunboats facing down small fishing boats is all faintly ridiculous, the fact this is happening just over four months into the UK and EU's new relationship is another alarming sign of how lingering resentment over Brexit threatens to spill into real conflict at the drop of a hat.

The US even deemed the spat sufficiently serious to intervene. "The Department of Defense encourages continued dialogue to resolve France-UK bilateral issues. Both countries are valuable NATO Allies," said a Pentagon spokesman on Thursday.

Fishing was arguably the biggest barrier to the two sides reaching a trade deal towards the end of 2020. Despite fishing's tiny contribution to the economies of both France and the UK, it is an extremely emotive topic for some people. Something about historic fishing towns falling into decline was particularly evocative in the UK's Brexit debate and was referenced constantly by the Leave campaign, who claimed that leaving the EU would allow British boats, free of the EU's quotas, to fish to their heart's content. 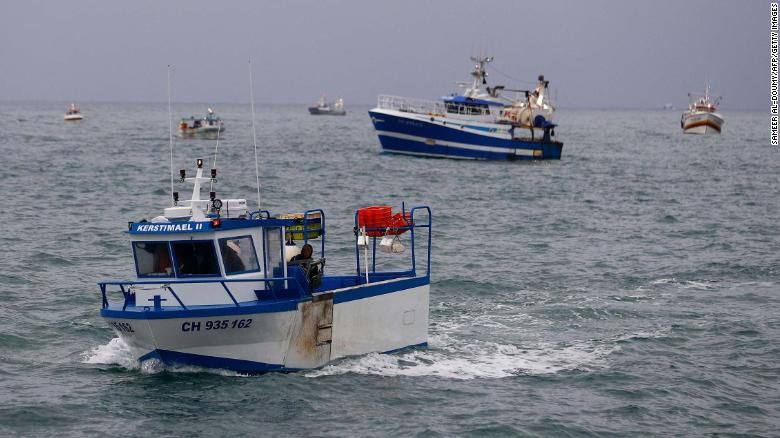 French boats off Jersey. History shows that spats over fishing between France and Britain have a habit of getting out of control.

This emotion goes some way to explaining the dramatic "act of war" headlines. And for all Downing Street's insistence that they want the situation to calm down, a cynic might wonder whether the press going full-blown hostile to France is actually pretty helpful for Boris Johnson.

The UK is holding critical elections on Thursday amid a swath of scandals surrounding Johnson's government. Menon notes that "this is almost a perfect story for Johnson. He gets to appear tough on France, which goes down well with his core, while also taking the moral highground and talk of de-escalation."

There is a longer-term risk of Johnson's Brexit looking increasingly rushed and flawed. Water disputes with France are far from the only fallout from leaving the EU. After these local elections, Johnson is going to have a hell of a job keeping his country together, as the four nations of the UK are pulling increasingly in different directions. In Scotland, this might mean leaving the UK. In Northern Ireland, this might mean a return to deadly sectarian violence.

However, as things stand on Thursday, circumstance appears to have gifted Johnson a golden PR opportunity on a day he would otherwise be banned from creating news that might affect how people vote. In the event that this does lead to a positive outcome in the elections, combined with the UK's coronavirus situation getting better by the day, Johnson's opponents will doubtless wonder what they can do to derail the luckiest man in politics.