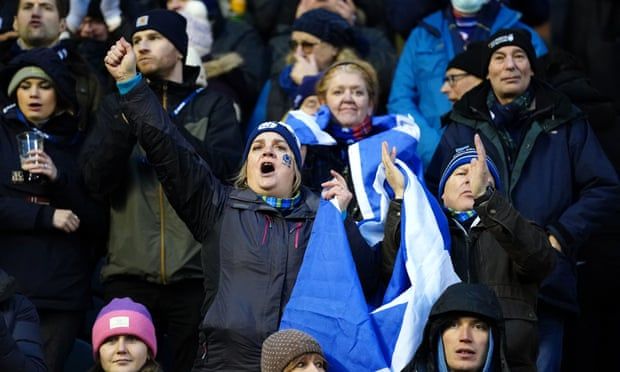 Nicola Sturgeon recently made clear that Flower of Scotland is not a shoo-in, despite its popularity, says historian and writer Rory Scothorne
Of the many things to be worked out were Scotland to become independent, the national anthem is low down on the list. The Corries’ 1960s folk song Flower of Scotland, which has been sung at football and rugby matches for decades, has everything a decent anthem needs. From its defiant tale of triumph over the auld enemy at Bannockburn (“And sent him homeward / Tae think again”) to its eulogy for absent heroism (“Autumn leaves lie thick and still / O’er land that is lost now”), it is imbued with what the Australian poet and literary critic Christopher Kelen calls “anthem quality”. This, Kelen argues, is the ability of a song to raise a special type of goosebump – not only through the feelings that words and tune stir in the individual singer, but also “the knowledge that these feelings are shared by one’s compatriots”.

Yet Flower of Scotland elicits a murmur of embarrassment in some circles, even among nationalists – indeed, this goes all the way to the top. In a recent interview on The Cultural Coven podcast, Nicola Sturgeon was asked about a hypothetical new anthem for an independent Scotland. “Nothing beats belting out Flower of Scotland at Hampden or Murrayfield,” the first minister said, but she confessed that: “The words are not the most uplifting and forward-looking.” She offered two alternatives: Highland Cathedral – a popular bagpipe tune that haunts Edinburgh’s tourist traps – and Dougie MacLean’s 1977 song Caledonia, a homesick lament best known for its starring role in an early-1990s advert for Tennent’s lager.

In some ways, these would both be fitting anthems for modern-day Scotland, reflecting the Scottish government’s obsession with attracting foreign investment and tourists while domestic industries and public services crumble. But fortunately for those leftwingers who blanch at Flower of Scotland’s anti-Englishness, there are several better options.

One is Both Sides the Tweed, a moving protest song about the 1707 Acts of Union, which says: “Let friendship and honour unite / And flourish on both sides the Tweed.” Then there is Scotland Will Flourish, another Corries number (and a favourite of Alex Salmond), which celebrates “the strength of our labour” and commands us to: “Forget the old battles, those days are over / Hatred corrupts and friendship refines.”

The obvious radical option, however, is Hamish Henderson’s Freedom Come-All-Ye, written in Scots in 1960 and adopted as an anthem by the anti-nuclear movement. It commemorates the revolutionary communist John Maclean and condemns Scotland’s role in the British empire: “Broken faimlies [families] in lands we’ve herriet [harried] / Will curse Scotland the Brave nae mair, nae mair…”

These are all worthy candidates, possessing that spine-tingling quality that Kelen identifies while rejecting the uncomfortable conflation of national pride with ethnic strife. But I must confess to another kind of discomfort at the prospect of a more ideologically correct national anthem. It seems to reflect an implicit yearning among Scotland’s progressives to feel more comfortable with their long-running dalliance with nationalism – a kind of national virtue-signalling that has always been one of Scotland’s favourite pastimes, dressing up our institutions and actions in the right words while rarely altering their substance.

I actually think Flower of Scotland deserves a second chance. Not because I harbour an ancient grudge against England, but precisely because it unsettles those who don’t. Its very ominousness strains at the limits of Scotland’s progressive self-satisfaction, reminding us that nationalism is, as the Scottish writer Tom Nairn put it, always “morally, politically, humanly ambiguous”. Singing your national anthem ought to make you feel a little uneasy, even – especially – when it gives you goosebumps.

Does any of this really matter? It’s just a song, after all, and there are far bigger problems facing the country. Yet there is something remarkable about national anthems. In a world of endlessly proliferating cultural options, selected and presented for us by markets and algorithms, it is increasingly bizarre that we should all know the words and the tune to the same old song.

I also think the idea of a national debate over whether or not we collectively approve of a song about ourselves has something rather utopian about it. Trotksy once predicted that under communism, with the great social struggles resolved, “people will divide into ‘parties’ over the question of … competing tendencies in music,” among other things (“a new gigantic canal”, the “best system of sports”). In lieu of a revolution, a proper anthem debate could at least provoke more illuminating popular reflections on Scotland’s identity and culture than salty bickering over pensions and currency.

Perhaps, in this spirit, the illusory timelessness of national anthems could be undermined in an independent Scotland by a forced renewal every 10 years or so, giving the various aesthetic “parties” time to build and evangelise their case: buskers instead of canvassers, concerts instead of conferences, mixtapes instead of manifestos.

With national culture thus democratised, I know what I’d campaign for to replace Flower of Scotland. John McEvoy’s 1950s folk song The Wee Magic Stane is a spiky, comedic tribute to when four Scottish nationalist students stole the Stone of Destiny from Westminster Abbey. It features a raucous chorus of “too-ra-li-oo-ra-li-oo-ra-li-ay” and a mischievous impression of the Dean of Westminster’s plummy accent.

Most importantly, it ends with a genuinely profound satire of sovereignty and national myths. In its telling, the UK government, seeking to replace the missing lump of rock on which Scottish kings were once crowned, commissions a stonemason to produce a new one, but “ … the bloke that wis turnin’ them aff on the belt / At the peak o’ production was so sorely pressed / That the real yin got bunged in alang wi’ the rest.” Essentially, the Stone of Destiny gets mixed up with lots of replicas, so anybody can crown themselves king. It is a fitting republican anthem for an age of blockchains and bought-off governments, reminding us that there can be liberation and joy in disenchantment.
Add Comment