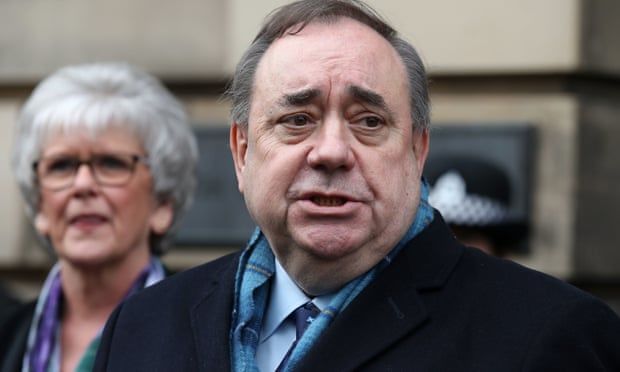 The allegations were made against the former first minister by two female civil servants in early 2018 to an internal government inquiry, which was later struck out by a judge after a legal challenge from Salmond.

Leslie Evans, the Scottish government’s permanent secretary, ruled five complaints from Ms A and Ms B were credible after an eight-month-long investigation into 11 allegations against Salmond. Three were rejected and a decision reserved on three others for procedural reasons.

Salmond has repeatedly denied any criminal wrongdoing and immediately launched a legal challenge after news of Evans’s inquiry was leaked to the Daily Record in August 2018.

In January 2019, a judge threw out the inquiry report after it emerged the official investigating the complaints had had prior contact with the complainants.

Salmond was acquitted of 14 charges of sexual assault, including charges based on the original complaints, after a criminal trial in Edinburgh in March 2020. Those included an allegation from Ms A which led to a charge of sexual assault with intent to rape, after an incident at Bute House, the first minister’s official residence in Edinburgh.

Evans’s full findings have been reported for the first time in a book by journalists David Clegg, who broke the original story about the inquiry, and Kieran Andrews, Break-Up: How Alex Salmond and Nicola Sturgeon Went to War.

It reports that Evans accused Salmond of an escalating pattern of behaviour involving female officials who were part of his core team of civil servants.

“Ruling on complaints from Ms A and Ms B, Evans wrote that his conduct on a number of occasions was ‘unwanted and of a sexual nature’ and had the effect of ‘violating’ their ‘dignity’ and ‘creating an intimidating, degrading, humiliating and offensive environment’,” the book reports.

Salmond said on Monday he had ordered his lawyers to lodge a complaint with the Crown Office, Scotland’s prosecution authority, alleging the book’s disclosures breached the judicial review ruling in January 2019 that quashed the government’s inquiry’s findings.

He said the book “also potentially breaches the criminal law in a number of ways”, but did not specify how. Salmond said he was considering legal action, again unspecified.

“Any leaking is in direct contravention of that order and thus undermines the entire purpose and outcome of the successful judicial review,” Salmond said in a statement. “As such it is an attack on the administration of justice itself.

“[There] are some who still wish to ignore the considered decisions of judges and the jury who actually heard the evidence and replace them with press smears based on malicious leaks and ludicrous gossip.”

The book also reports a civil servant in Salmond’s private office, Michael McElhinney, had kept a diary of alleged incidents involving the then first minister and his officials, including some of those alleged by Ms A and Ms B.

That record led to civil servants introducing an informal policy intended to ensure no female officials were left working alone with Salmond. It was later given to the Police Scotland detectives investigating Salmond.

He and Nicola Sturgeon, the then deputy first minister, denied any knowledge of that policy during a Holyrood inquiry into the government’s handling of the complaints.

Salmond was later awarded £512,250 in legal costs after winning his judicial review against the Scottish government. Evans and senior officials were accused of failing to disclose to the court significant information about the internal inquiry, including the actions of the official conducting the investigation.

The court ruled those procedural irregularities mean the inquiry was unlawful and “tainted by apparent bias”. The inquiry results were annulled and Evans’s report was withheld from the Holyrood investigation. The Scottish government argues, however, that Ms A and Ms B’s allegations could still be reinvestigated.
Add Comment