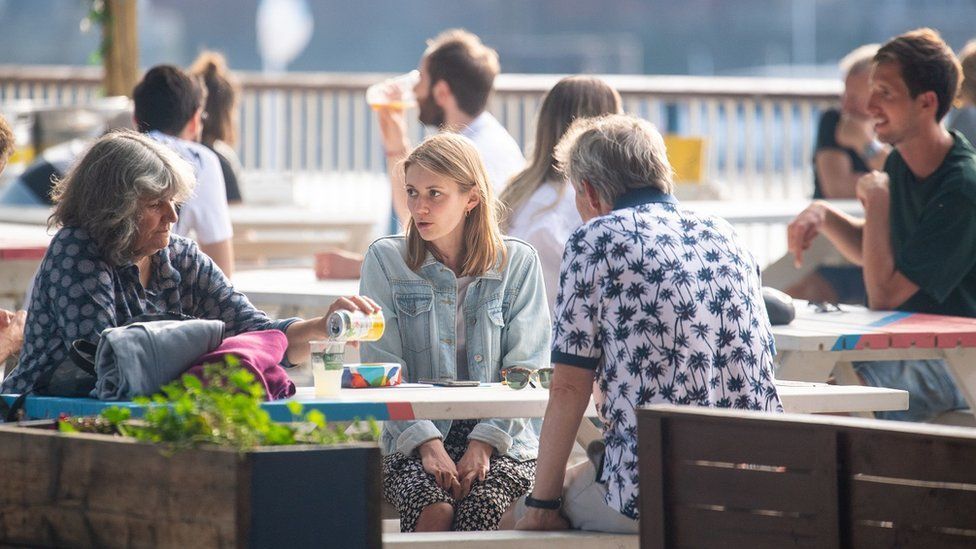 21 June: End of England's Covid lockdown could be delayed by one month

The government is considering delaying the lifting of England's remaining Covid restrictions by up to four weeks, sources have told the BBC.

The final stage of lifting lockdown, originally planned to take place no earlier than 21 June, would see all legal limits on social contact removed.

It comes amid growing concern over rapidly increasing cases and the higher transmissibility of the Delta variant.

Downing Street sources emphasised that no final decision has been made yet.

Data is still being examined ahead of a final announcement scheduled for Monday, and a senior government source stressed the government was considering "options - plural" for step four of England's roadmap.

Pushing the date back would allow the vaccination programme to take greater effect, as the rollout moves through to younger age groups.

The Times and Sun newspapers first reported that ministers were considering the delay.

It comes as key figures from the UK's Covid vaccine programme were recognised in the Queen's Birthday Honours list.

The last part of ending lockdown in England would see nightclubs reopen, and an end to restrictions on performances, weddings and other life events.

The British Medical Association has joined public health officials in calling for a delay.

BMA council chairman Dr Chaand Nagpaul said: "It's not just about the number of hospitalisations, but also the risk to the health of large numbers of younger people, who can suffer long-term symptoms."

It is often said the vaccination programme has broken the link between infections and hospitalisation.

But in truth it has just weakened it. During winter about one in 10 Covid infections went on to become a hospital admission. Now with admissions rising early data suggests it may be close to one in 20.

If that's right and the trajectory in terms of increasing infections continues we could see 2,000 admissions a day within two months. That's twice what the NHS would normally see for all types of respiratory infections in a bad winter.

But that's a lot of ifs - and the data on its own doesn't tell the full story. More admissions seem to be among younger people this time who are less sick.

That makes sense as very low numbers of the double-jabbed are ending up in hospital.

There's a lot of uncertainty. In a few weeks scientists will be able to give ministers a clearer idea of the cost of a full unlock so it can be balanced against the benefits. What's more, the number of vaccinations done would be higher, providing even more protection.

Following reports in the Times that some restrictions, such as the 30-person limit on weddings, could still be eased on 21 June, sources said various options are being considered.

The government said in February that England's restrictions would only be lifted if:

The Delta variant first identified in India now accounts for nine in 10 coronavirus cases in the UK.

It is roughly 60% more transmissible than the Alpha - or Kent - variant, Public Health England data suggests.

The analysis also found people infected by the Delta variant are two times more likely to end up in hospital than those with Alpha. 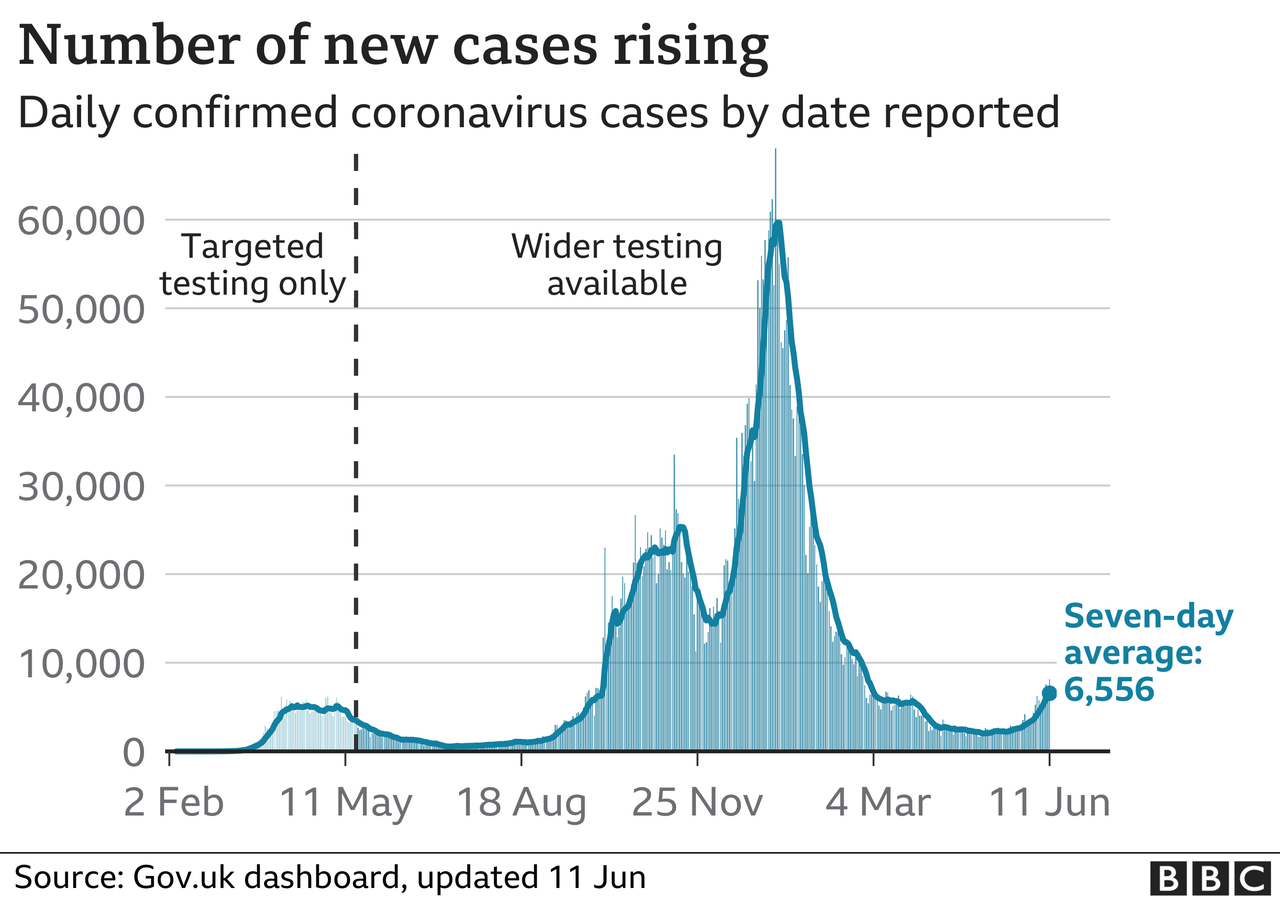 However, the data suggests nearly two-thirds of people infected with the Delta variant have not had a single dose of a Covid vaccine. Officials stress that two doses of the vaccine provide significantly more protection than one.

At the current rate of growth, as estimated on Thursday, the UK will reach 15,000 cases a day by 21 June and January levels of infections by late July - that is without any further relaxation of rules.

Dr Mike Tildesley, reader in infectious disease modelling at the University of Warwick and a member of the Scientific Pandemic Influenza Modelling group of Sage, told BBC Radio 4's Today programme the key thing was to look at the link between cases and hospital admissions.

"We are starting to see perhaps early signals that hospital admissions are going up but it's still unclear," he said.

He added that even with a delay there would be a wave of cases and hospital admissions, and the government would have to weigh that up against the benefits of unlocking.

He told the Today programme new evidence on safety of the vaccination in children suggested they were "pretty safe".

Shadow home secretary Nick Thomas-Symonds said any delay to ending lockdown would be "a huge blow for many families and businesses across the country".

The Labour MP accused the government of continuing with "a reckless border policy that allowed the Delta variant to reach the UK and spread" despite warnings from scientists.

On Friday vaccines minister Nadhim Zahawi said it was important to take a careful approach, adding: "We don't want to squander those hard-fought gains that we have made through the vaccination programme." 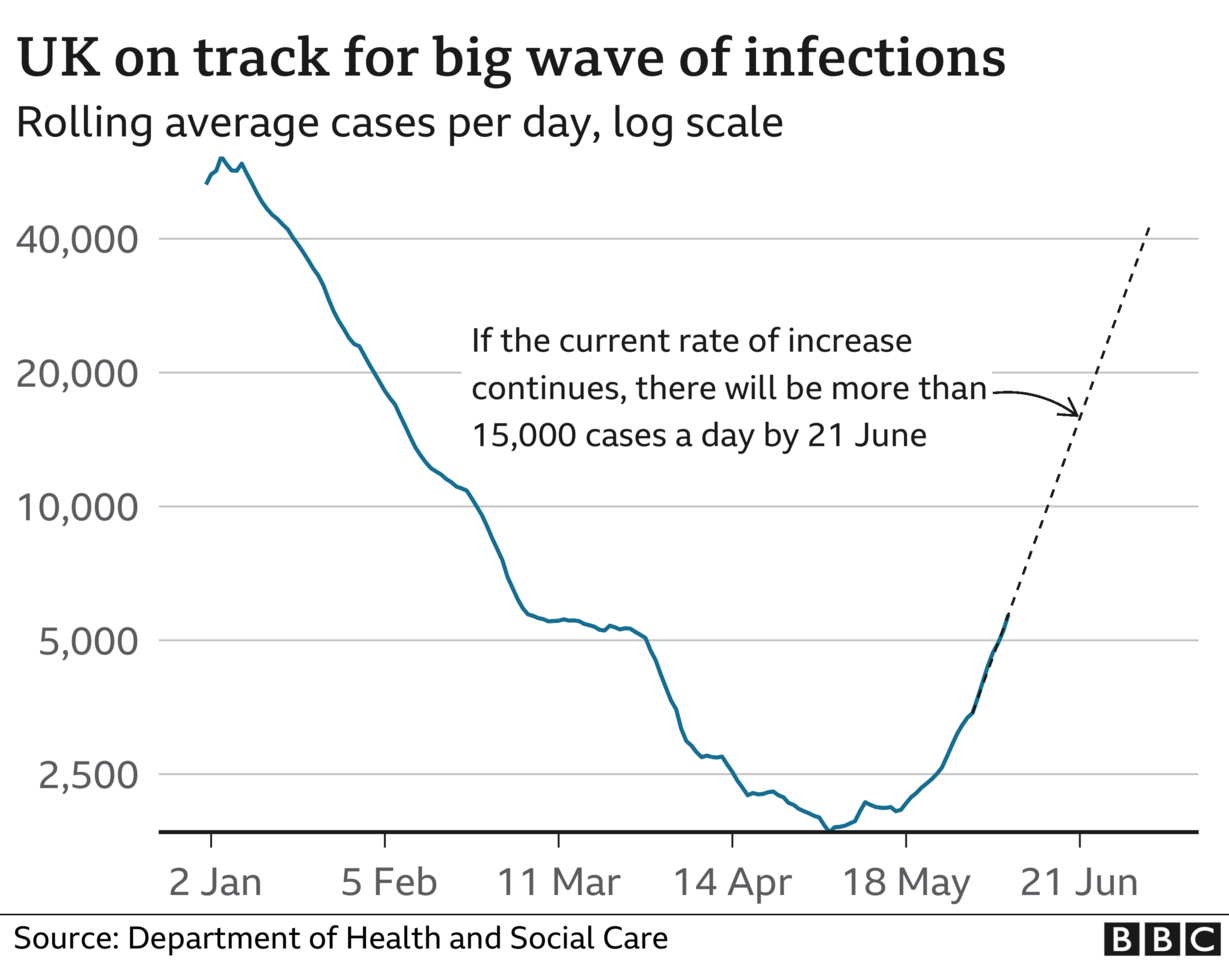 Another 8,125 virus cases were recorded in the UK on Friday, according to official figures, and another 17 people died within 28 days of a positive test.

More than 29 million people in the UK have had both doses of a vaccine - 55.4% of the adult population.

The R number in England is estimated to have risen to between 1.2 and 1.4, meaning that, on average, every 10 people with Covid will infect between 12 and 14 others.

The easing of restrictions is happening at different speeds across the other nations of the UK with 21 June being given as an "indicative date" for a number of changes in Northern Ireland, including 10 people from two households being allowed to meet in private homes, up to 15 people being able to meet outdoors in a garden and theatres and concerts able to restart.

Lockdown measures in Wales will be reviewed on 21 June, while the whole of Scotland is due to move to level zero on 28 June - but the prevalence of the Delta variant may delay that.